No matter what you call it, if you’ve paid atttention to your colleagues and survey results, it’s clear that a large number of physicians are unhappy with their careers and work-life balance, or lack thereof.

Calling it physician “burnout” seems to put the blame on the physician. As if they caved under the pressure and burned out, much like a candle that couldn’t handle the breeze coming through the window on a stormy eve.

More recently, another term has appeared that shifts the focus from the end result to the causative factors. That term is “moral injury.” Dr. James Turner compares and contrasts the two perspectives, explaining why semantics matter in this case. 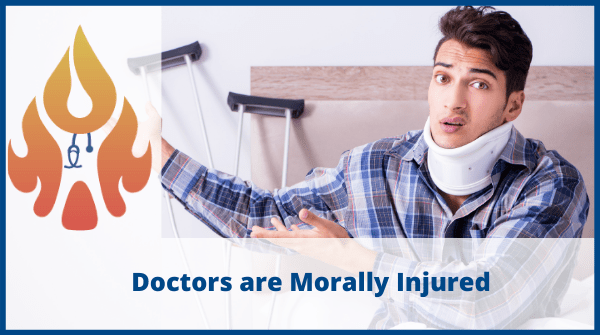 Physician burnout is costly to both the institutions where we work and to the individual physician, too.  It was originally described as a three-pronged insult characterized as depersonalization, feeling a lack of accomplishment, and emotional exhaustion.

However, the term “burnout” has come under fire recently.  Some favor the term “moral injury” instead.  Today’s post will describe the importance of both terms, and how moral injury fits into the equation.

If you have strong feelings on which term is most appropriate, leave a comment after reading through today’s post.  Or, join the discussion in the Physician Philosopher’s Facebook Group (for Physicians only).

The structure of medicine often feels like a dedicated road to burnout.  We enter our 20’s with the most altruistic of callings: to help people.  With an optimistic view of being a healer, we feel destined to do great things.  Somewhere in between that point and when we finish residency training, many of us lose that optimism.

Our feeling of optimism has been replaced by a jaded and cold feeling towards our jobs and the current landscape of healthcare.  We are surrounded by insurance companies, electronic medical records (EMR’s), and hospitals who won’t love us back.  All the while, we are upside down in student loan and consumer debt.

We sometimes become numb to patient outcomes, good or bad. We are also becoming numb to the idea that the broken system might change.  And we are certainly numb to the debt burden we carry while we try to carry what feels like the weight of the world on our backs.

As we burn the wick on both ends, we start to view our patients as objects and feel that all we have accomplished hasn’t amounted to much.  Over the past 30 years, the term “burnout” has been the most utilized term to describe this phenomenon.  And, it is obviously not a good thing.

Is it really the physician who is burned out, though?  Does burnout imply that it is the doctor’s fault? Or are we being burned by the system instead?

Determining the ultimate cause of physician burnout has proved enlightening.

This lack of autonomy is manifested in many ways.

They cannot see patients as often as they like, or for as long as they want.  Instead, we have a computer screen that requires us to document our work. And we can’t just document it.  We must used these glorified cash registers that we call EMR’s to get our orders to go through.  These EMR’s often obstruct patient care more often than they aid in the process.

And when they do finally work, we can anticipate the patient phone call a few days later saying that the insurance company has decided the test you ordered isn’t medically necessary.  When you call the company, you can expect to speak to someone with no medical training.

The Rub with Physician Burnout

Despite the fact that medical students are the most satisfied graduate students coming into school – and leave with the lowest rates in both of those categories – many continue to point the finger at the person who struggles.  Of course, this is preposterous.  Burnout is not caused by the individual. It is caused by the system.

You’ll notice that the majority of causes described above (and elsewhere in the surveys that have been conducted) say little about physician burnout being caused by the doctor.  It is not their lack of resilience, intelligence, or work ethic – which should be obvious given that these same characteristics are required to become a doctor.

This is where the rub is with the term “physician burnout.”  The term implies that the cause – and, therefore, the solution – is rooted in the individual rather than in the system. It misplaces the blame, and expects the wounded to figure things out on their own.

This might explain why the most often cited ways to deal with “burnout” are individual solutions.  They say that we need to meditate or pray more; or that we need to become more resilient.  We need to pick ourselves up by our boot straps!

It is for these reasons that the term “burnout” has come under fire. It can produce victim blaming that proves unhelpful in solving a systematic problem.

Given the issues mentioned above, a new term has come about that seems to capture a different picture. The term Moral Injury was first used in medicine by Dr. Talbot and Dr. Dean.

Moral Injury is also attributed to another workforce: soldiers.

While physicians do not go through combat, they do experience the same secondary PTSD that soldiers experience when they see unnecessary morbidity and mortality that they are powerless to prevent. In a field meant to provide health, physicians often feel unable to provide the help that they know the patient needs – and that they could provide if allowed.

Being raised to have a tremendous amount of respect for our country – and being the first male in about four generations not to go into the military – I don’t make that comparison lightly.  It’s really the only thing that I’ve found that seems to have the same pathophysiology.

Dr. Talbot and Dr. Dean believe that this is all caused by the stripping away of the physician’s autonomy, and their being pulled in thousands of directions.  They do not believe that it is caused by a lack of resilience or ingenuity. In fact, this is what they have to say about it from the article linked above:

“Physicians are smart, tough, durable, resourceful people. If there was a way to MacGyver themselves out of this situation by working harder, smarter, or differently, they would have done it already.”

Is Moral Injury a Better Term?

On this blog, I’ve used the term burnout because it is the common language for this discussion.  Using the term “moral injury” does not produce the same level of understanding from colleagues, administrators, or the general public.

Despite that, it might be time for a change.  We need to use the term that best encompasses the multiple facets of the problem.  And moral injury does that.

So, stick with me as I use both terms to describe this phenomenon as “burnout” and “moral injury” on this blog.  I’ll use them a bit interchangeably, but please know that in no way do I place the blame for this problem on the physician.  I am slow to blame the victim in this situation.

In the end, I realized that I simply cannot stand by as people point fingers at some of the most incredible people in existence while physician suicide happens at epidemic rates higher than that of even our military.

Here is where the rubber meets the road.  Moral injury is a systematic problem that will require systematic solutions.  We must demand more from those who control the environment in which we work.

Until that happens, we must take matters into our own hands by fighting back with financial independence. Pave your way to have a voice, to cut back if you need, and to leave this mess altogether if those in control refuse to fix the problem.

What do you think?  Moral injury or burn out?  Why do you prefer the term?

2 thoughts on “Doctors Aren’t Burned Out, They are Morally Injured”