As an anesthesiologist, I sometimes felt a certain pressure to drive a better car, live in the right neighborhood, or book luxurious accommodations when traveling.

For the most part, I resisted. Luxury’s just never really been my thing. I’m more of a stealth wealth kind of guy, and unnecessary expenditures fly in the face of the financial security I was after.

I have to admit that it was not that difficult blending in and avoiding consumerism culture living in smaller towns in the midwest where I spent most of my career. It’s not like I was a plastic surgeon in New York City!

Today’s guest author was, though. Dr. Jordan Frey, the Prudent Plastic Surgeon, describes how and why he overcame the urge to keep up with the Joneses of NYC.

How I Found Financial Security in a Culture Obsessed with Consumerism

I’m never quite sure how to answer when people ask what I do.

Usually, I say something vague enough that there are not too many follow-ups.

In reality, I’m a plastic surgeon specializing in microsurgery, particularly in breast reconstruction. I just completed 7 years of training and am starting my first job as an attending surgeon.  I love what I do and plan on doing it for a long time.

The mental image that jumps to mind for most people when they hear, “I’m a plastic surgeon” is of an impeccably manicured woman or man in a designer dress or custom suit sitting in a luxurious Park Avenue office. Their look says, “Let’s make you beautiful.” Their dinners have at least 5 courses and their pocket squares or handbags have their own closets. They definitely have a flashy Instagram page.

Don’t get me wrong. I don’t have any problem with those who choose to lead their lives and careers this way.

The problem was that during my training in New York City, this was also the picture that I had of what I should be striving to appear and be like. Even as a resident making an at best average salary in one of the most expensive cities in the world. Even with student loans in excess of $400,000.

I was ashamed to admit that I was nowhere near achieving this status and had no idea how I would. The problem was that I didn’t even know if I wanted it, but I do have to say that I felt for a long time like I needed it.

Even in training, working long hours and making less money, this standard that equates wealth with expensive things seemed to seep into all of us. This belief is pervasive for most, if not all, high income individuals.

But, think again of your mental picture of a plastic surgeon; now imagine a primary care physician. Fair or not, I bet those images looked very different despite both doctors providing important care to their patients at a high level. The thing is, these mental images look different even for people who are plastic surgeons, including me. I struggled to fit in.

To put it simply, I was falling for the illusion of consumerism. 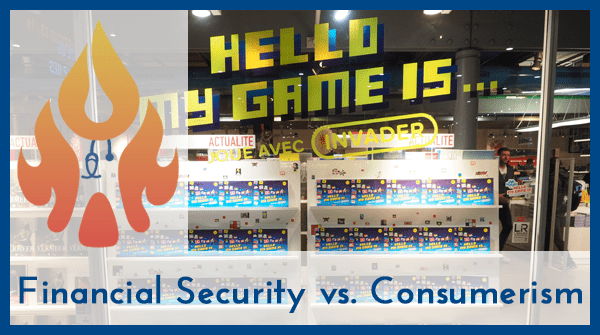 Over-consumerism can be spotted millions of times each day, just flipping through TV or browsing the Internet. It espouses the principle that you are what you have. It’s what makes residents buy an expensive suit to go to weekly educational conferences instead of paying down their student loans.

The feeling of need to keep up with this perceived status as a trainee frustrated me. But what really led to a disconnect between the image of a “rich plastic surgeon” and my reality was that I did not see any viable pathway to achieving this image after 7 long and grueling years of training. This is what can and did lead to burnout.

I was in a residency, specialty, and city that was obsessed with consumerism. I had been sucked in and didn’t know what to do. I would become an attending and get a big increase in salary. But along with that would come a commensurate increase in expenses to pay for all of the fancy things I needed to prove that I was successful. Like B.I.G. said, mo’ money, mo’ problems.

So how did I overcome this consumerism consumption?

It wasn’t easy. It took a lot of soul searching. But to put it quite plainly, I decided to ignore the image (real or perceived) of success put out there by others.

I would instead focus on my passions and goals rather than excess consumerism. I would establish a plan for financial well-being, stability, and independence.

Financial Security as a Goal

Once I made financial security my goal and admitted that I knew absolutely nothing about it, the flood gates opened. I found a lot of power in this simple admission: that I did not know what I was doing. Finally, I could move on to the next step: figuring it out.

By facing my mistakes head on and dedicating myself to my financial education, they no longer held power because I knew that I could fix them and ultimately get to where I wanted to be.

Freed from outside expectations that I had internalized, I was focusing on the things that mattered to me and my family.

I learned that “rich” does not make you “wealthy.” Nowhere in any net worth calculator does it ask you what your annual salary is.

I discovered that I could optimize my spending by allocating it in an intentional manner to the things most likely to bring me continued happiness rather than purchases that brought short, intense highs that would dissipate and leave me wanting more.

I’ll give a prime example of this intentional spending.

I am not a car person. I really don’t derive any pleasure from how fast my car can potentially go or how it looks. Because I was lost in consumerism, I was planning to lease a luxury car for $450/month once I moved to start as an attending.

I figured this is just what one did. But then I realized that this would not bring me any real joy. In fact, this would have created stress for me because happiness I derived from the car would never justify the  money I was paying.

So, I instead bought a 2011 Toyota Avalon from a family member for $2,000. I am so much happier driving that car and knowing that the money I would have been spending on a lease is going to the things that truly bring me and my family happiness.

I am, however, very much still in the process of getting to where I want to be.

I Have Made Financial Mistakes

My list of financial mistakes is long. My mindset was unhealthy. I made just about every wrong financial move that you can make. I was ignorant and scared to learn, for fear of seeing just how badly I had screwed things up.

The thing is, I’m willing to bet that there are a lot of you out there who are in the same boat and are probably ashamed to admit it, like I was.

It is hard to be self-reflective in recognizing how big a part consumerism has become in our lives and how it is affecting us. Too often, we see others living according to the principles of consumerism and we think that is the only path. I assure you that it is not.

The concepts of saving 20-30% (or 50%!) of your salary, of investing in assets that make your money work for you (broadly diversified, low cost index funds, cash-flowing real estate, etc.), of minimizing your liabilities that take money out of your pocket rather than putting it in your pocket seem so simple now that I’m on the other side. But just a few months ago, these models were completely foreign to me.

Interestingly, while this mindset and financial revolution was happening, something amazing happened. I found myself rediscovering my passion for my work. I became a better physician.

Unfortunately, many physicians treat personal finance or its discussion as a dirty topic. We got into medicine to help others, not to make money. However, the pursuit of our best life is not mutually exclusive to our desire to help others.

Further, money plays a significant role in our lives just like everyone else, whether we like it or not. We may as well be educated to make our money work the hardest for ourselves, our loved ones, our patients, and the causes that we care about.

Following in the footsteps of giants like Physician on Fire, I created a blog as the Prudent Plastic Surgeon to share my story and resources focused on increasing financial well-being as an integral component of personal well-being. My perspective is unique in that I have not yet reached this goal but am rather on the road along with you.

If I can slip out of the grip of consumerism to see the light of financial security and emerge, dare I say, on FIRE, so can you!

It is never too late (or too early) to start!

What have you done to overcome consumerism culture?