How does one build generational wealth? Step one is to build some wealth of your own.

Steps two and beyond will depend upon the goals you set for the wealth that you’ve built. What will your priorities be for those dollars? Do you have philanthropic aspirations? Would you like your kids (and their kids) to receive the bulk of your wealth?

This Friday Feature from Linda Meltzer, a professor of business and finance with both a law degree and an MBA, was originally published on The Cents of Money. 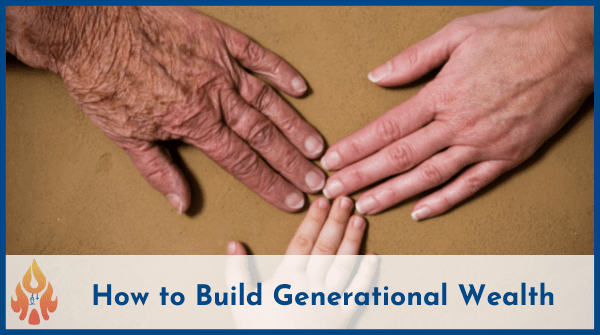 When you envision generational wealth, do you see images of private jets, lavish parties, extra chilled martinis, and designer clothes for toddlers come into view? That may be, but this post is not about those already wealthy. It’s about people striving to build wealth and pass it to the next generation.

What Is Our Duty to Our Children?

Having and raising kids is the most challenging job in the world. As parents, you are responsible for their wellbeing, keeping them safe, healthy, supporting them in any way possible no matter how sassy and disrespectful they become as they enter their teens. Parents often have to be “perfect” in their children’s eyes and even know some magic tricks.

You want them to be happy people, respectful to others, good members of society, and financially secure.

Generational wealth refers to our ability to pass our assets to our children and grandchildren as part of our family legacy. The current generation wants to leave behind family wealth as a legacy for our children, the next generation, so they have financial advantages to better themselves.

3 thoughts on “How To Build Generational Wealth”