When I saw these words in the ASA Annual Meeting schedule, I knew I had to check it out:

It was a three-hour tour, guided by pediatric anesthesiologist Jonathan D. Griswold, MD. I didn’t sign up to learn how to plan for retirement; I’ve got a pretty good handle on how I’m doing that. Curiosity drove me to add the item to my itinerary.

Who Attends a Retirement Planning Workshop?

I was keenly interested in the topic, but some physicians might find three hours of retirement and investing talk to be tedious. Judging by the fact that roughly 99.8% of the conference attendees chose to be elsewhere during the talk, I found myself among a tiny minority.

In addition to the speaker and me, I counted 27 other heads in a room with 48 seats at a conference with about 15,000 attendees. That statistic speaks volumes about the interest level.

I see both good and bad in the fact that so few showed up for a $75 financial workshop. It could mean that:

While many physicians will fall into one or more of these camps, I would have liked to have seen a stronger showing, particularly among the younger physicians who stand to benefit the most from this information.

Eyeing up the number of gray and / or balding heads from the back of the room, I gathered most of the audience consisted of late-career physicians. Maybe 25% — that would be seven or eight physicians — appeared to be under the age of 50. 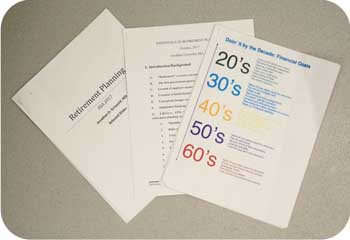 Beforehand, I wondered how a speaker could fill three hours continuously talking about this stuff. Afterward, I was amazed at how much information Dr. Griswold had squeezed into three short hours.

Early on, he told us that he understood there would be a wide range of knowledge in the room, but that he had to teach as though we were all beginners. That’s fair, and it’s what a good teacher needs to do. I think our speaker did an excellent job of quickly covering the basics while still making time for more advanced topics.

We started with the history of the concept of retirement and retirement spending, starting with Otto Von Bismarck’s social insurance program in 1889, and moved on to retirement accounts in the United States.

The different types of retirement accounts were discussed (pensions, qualified vs. non-qualified accounts, traditional vs. Roth, etc…) and the tax treatment of each.

With the basics covered, we had time to dive into more advanced topics like RMD’s, Roth conversions, and the “backdoor Roth.” Judging by a show of hands, I might have been the only one in the room doing it, and that includes our speaker who would be subject to the pro-rata rule.

No discussion of retirement would be complete without addressing social security, which we did in some detail. We also touched on annuities, withdrawal rates (with Bengen’s 4% safe withdrawal rate study featured), and sequence of return risk.

Finally, the effect of fees on your account growth, age at retirement, and common causes of financial failure in retirement were all a part of this rather comprehensive workshop.

What I Liked About the Retirement Planning Workshop

The talk was given by a colleague with nothing to sell and no discernable conflicts of interest. He has passed the CFP exam, but does not use it professionally. In his opening statement, he told us:

“I’m here to help you make good decisions and prevent you from getting taken.”

This reminded me of the White Coat Investors mission to help those who wear the white coat get a “fair shake” on Wall Street. A noble cause.

I felt the talk was thorough, if not slightly rushed out of necessity. I had a free lunch to grab at a noon talk, so our speaker’s timeliness was much appreciated.

The questions from the audience were good, and the answers and discussion that followed were excellent, as well. I wish there had been more time to dissect some of the topics in greater detail.

I was happy to see the 4% rule come up. Earlier in the talk, multiples of income were used as guides to how much one should save, and I didn’t know if we’d see anything more sensible.

I liked seeing the backdoor Roth mentioned. Many docs should be able to find a way to get their traditional IRA money into an individual 401(k) or employer’s 401(k) to take advantage of this. Clearly, most do not. It’s a small win, but I’ll take any win when it comes to lowering tax drag and avoiding future capital gains.

I also learned a thing or two. I didn’t know the subtle differences between a 403(b) and 401(k), but I learned that a 403(b) has more limited investment options, but may offer an additional $3,000 in deferment to employees of > 15 years of service.

The “retirement smile” was a new concept to me. It’s not the big toothy grin I’ll wear on my face when I do pull the trigger, but rather a graph of spending decreasing as we age to a nadir around age 80, at which point spending starts to rise due to health care costs. I think many retirees expect a gradual decrease without thinking about that potential and likely uptick later on (if you live long enough to see “later on”).

Dr. Griswold gave us a plethora of sources to refer to, and I liked the fact that some of my favorites were mentioned in the slides or handouts, including Michael Kitces, Michael Piper, Wade Pfau, and the Bogleheads.

What I Didn’t Like About the Retirement Planning Workshop

On the subject of resources, I was surprised and disappointed not to see The White Coat Investor mentioned. In my opinion, it’s the best online investing and personal finance resource specifically for physicians, and the site and forum are worthy of a mention somewhere in the talk or handouts.

I alluded to this earlier, but when discussing how much to save for retirement, numbers like 8x, 12x, or 16.6x (Pfau) of your income were used as rough guides, but there was no mention of using a multiple of your anticipated annual spending. A bunch of retirement calculators were referenced, all of which use the same faulty logic that only makes sense if you spend a significant majority of your paycheck.

It was good to see a slide from Vanguard showing how investment fees could knock $100,000 or more off the ending value of a $100,000 investment over thirty years. But the slide doesn’t do justice to the disservice of high fees, because exactly none of us are investing one lump sum and never investing again. As I’ve demonstrated in one of my favorite posts, investment fees will cost you millions.

When the 4% rule was displayed, that would have been the perfect time to talk about how one could use it as a reason to save 25x annual spending for your retirement / financial independence goal. The only mention I recall of spending as a factor at all was in one slide listing “lifestyle” as one of the numerous variables that will impact your retirement needs.

Several investment vehicles weren’t mentioned at all, perhaps in the interest of time. Still, I think it’s important to bring up the HSA, a.k.a. triple-tax-advantaged stealth IRA that is a wonderful tax deferral / avoidance tool that saves me at least $3,000 in taxes per year.

Speaking of saving on taxes, I was surprised to hear that the good doctor giving the talk makes Roth contributions to his employer-sponsored retirement account. It could be that he expects to have an RMD problem, but for most high-income professionals, tax-deferred investments are a better choice.

In general, I prefer traditional contributions for anyone above the 24% federal income tax bracket, and especially for those in the 32% to 37% brackets. There’s a good chance we will find ourselves in lower tax brackets, and possibly in lower tax states, in retirement.

If 529 Plans were mentioned, I missed it. In fact, paying for college wasn’t much more than a line item, but the choices physicians make in this department can have a profound effect on their ability to save for retirement.

What did I dislike the most?

The fact that so few people showed up. I rattled off a few possible reasons and excuses above, but I think the #1 reason is that many physicians genuinely are not interested in personal finance and are comfortable trusting their hard-earned money to be managed by someone else.

Dr. Griswold did talk about the differences between a fiduciary and suitability standard, and I wonder how many physicians even know which standard their financial advisor is following.

Have you attended a similar workshop? We were told this talk was the only session at the conference not of a scientific nature. Have you seen anything similar at a medical conference? Would you have attended?