Hooray, my bounce rate is back up! And pageviews are way down! Why am I happy? I fixed a glitch that was causing Google Analytics to register one page view as 2, which also kept the bounce rate extraordinarily and artificially low.

I uninstalled “Google Analytics by Yoast”, a plugin that I thought might give me a different way to look at site traffic. All it did for me was goof up the data that I was already looking at in Google Analyics. So now I have more useful and truthful information.

A fun thing that happened the other day. One of my posts was featured on Rockstar Finance, and 1,254 people visited the site to read it, which is about 10 times more users than a typical day. Here’s what that looks like, a nice pointy spike, not unlike those that adorn Rockstar Finance curator J. Money’s mohawked head.

Spikes are fun to see, sustained growth is even better. It seems that after a spike, traffic returns to a baseline, but the new baseline is a bit higher. A few subscribers are added to the e-mail

lists. As of today, there are 71 e-mail subscribers and 44 Feedly readers, so new posts should reach > 100 people. The stats tell me that Thursday’s post, 4 Physicians Revisited: Dr. C & the Impact of a Sabbatical has been viewed 130 times, so the numbers correlate pretty well. A few people see my posts via facebook and twitter as well.

My first post went live January 14, 2016, about 9 weeks ago. Here’s a look at site traffic over that time period. 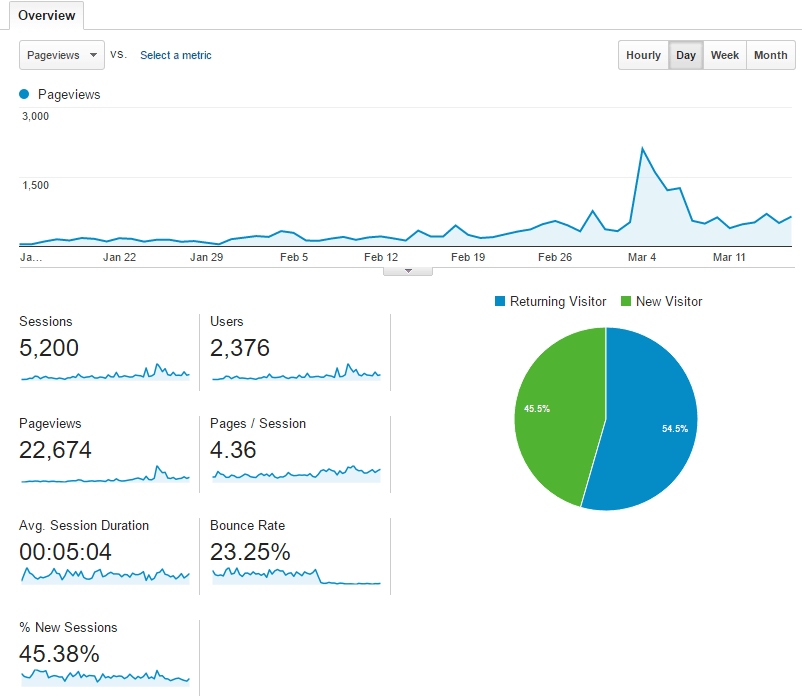 What jumps out at you? Perhaps the mountain peak on March 4th? Same here. That’s when I had my first guest post, Can Doctors Retire Early? on Joe Udo’s Retireby40 site.

Another oddity is the Bounce Rate. It goes from about 30% to 3% and stays there. This is apparently artifact. A change I made to the site (most likely a plugin) is sending Google an additional ping that makes a single pageview look like more than one. Edit: Fixed it!

A more meaningful statistic to look at is the exit %, which can be found in the Behavior section. As I have added pages and posts, there is more for the reader to see, and the exit rate has dropped steadily, and is around 20% or so most days. I wouldn’t expect it to go much lower. Subscribers who come to read a new post will most likely read that page and move on with their lives, and that’s OK.

How is the site doing lately? Here’s an overview of the last 2 weeks, which includes the guest post at the beginning. 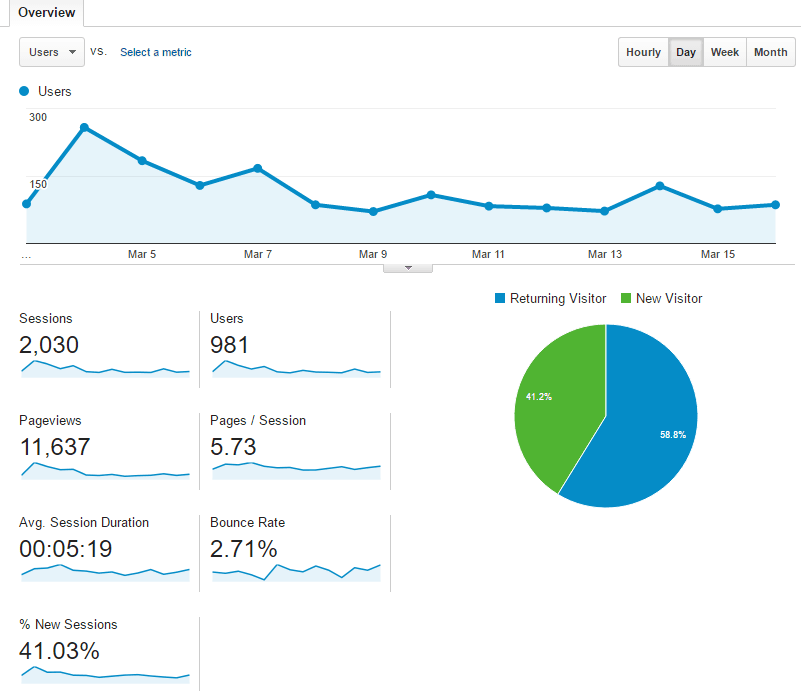 Assuming the data is accurate, nearly 1000 people have visited the blog in the last 2 weeks, and they have looked at about 5 pages for about a minute each. 41% have never been here before, 59% are returning readers. Most days, the site reaches at least 100 people. Nifty!

As you may know, I will be attempting to “monetize” the blog, with 50% of the proceeds being donated to charity. Thus far, I am using 2 avenues, Google AdSense, and the Amazon Affiliate program. I will gradually add new avenues as the readership grows. I won’t be posting revenue information publicly, but will share the site’s income in a quarterly newsletter that will go out to all subscribers. As of today, that’s 50 of you.