The last time we revisited Dr. Carlson, we explored the impact of a higher salary and learned that a 33% raise shortened her time to FI by a similar percentage.

Today, we’ll investigate the ramifications of a completely different scenario: taking a break.

As we have done in our other revisits to our 4 physicians, we will alter their fate at a point 11 years after we were first introduced to them, the point where Dr. A became financially independent.

So Dr. Carlson has been making a good living, working hard, and starting to feel that 11-year itch. Symptoms of burnout are beginning to manifest. She is struggling to find joy in the day-to-day grind. Dr. C decides to take an extended timeout from her career.

After some discussion, Dr. C is able to negotiate a 1-year absence from her job. For 12 months, she will have no earned income. Intelligently, Dr. C plans to take her sabbatical from July to June in order to earn a half year’s income in each of two calendar years.  By doing so, she will be able to continue contributing to tax deferred retirement accounts each year, while paying a much lower tax bill in two consecutive years.

To keep things interesting, we can compare the outcome with a choice to take a full calendar year off from January to December. An additional comparison can be made by having Dr. C begin her career one year later, showing us the cost of deferring for a year prior to beginning medical school, or requiring an additional year to gain acceptance.

I can’t tell you how Dr. Carlson plans to spend her year off. I can think of a whole lot of fun and relaxing ways to spend that time, but I’m not Dr. C. Maybe she sails around the world, from one Island In The Sun

Perhaps she never leaves the county, and volunteers at the local free clinic to keep up her skills. Hopefully, she will take advantage of the sabbatical to find time for personal growth, travel, sleeping in, and connecting with family and friends.

The Cost of a Sabbatical

I do know that Dr. C has some fixed expenses and she’ll find ways to spend money with her newfound free time. To keep the calculations simple, we’re going to assume that her family’s expenses remain the same throughout her year off. That is, the budget will remain steady at $160,000 per year in our calculations.

In the July to June year off, Dr. C has taxable income each year and is able to contribute to tax-deferred retirement plans. To cover her costs though, she must sell some from her post-tax accounts each year to make up for a $74,500 shortage. I say post-tax accounts, rather than taxable account, because the taxable account won’t be quite enough to cover the $149,000 she needs. Thankfully, Roth contributions (but not earnings) can be withdrawn tax-free and penalty-free.

In the January to December calendar year off, she is unable to invest any money with no taxable income (although her already sizable investments will continue to grow). To cover her spending and health insurance, she’ll have to come up with $165,000 from her post-tax accounts.

Here’s a look at what these years might look like for Dr. C. The first column is without a sabbatical. The next two columns represent two six-month intervals in a sabbatical spanning two calendar years. The final column has Dr. C taking one calendar year off. 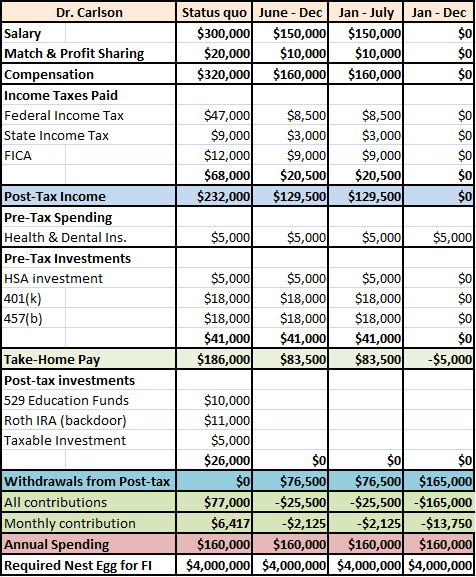 It’s incredible to see how much taxes decrease with a lower salary, as we saw when looking at Dr. A going part-time. Of course, taxes are even lower when you have zero salary coming in, a situation exists when taking a January to December calendar year off.

There would be some long-term capital gains realized when selling off the taxable account, but not enough to push her out of the 15% tax bracket, so she won’t pay any taxes on those gains (or qualified dividends), a fact emphasized in one of my favorite posts, The Taxman Leaveth.

How will the year off affect her nest egg in the coming years? The following table shows us its value at our starting point, 11 years into her career (or 10 with the 1-year delayed start), at 13 years (after the sabbatical), 20 years, and finally when realizing FI after a 28 to 30-year career.

As we know from the original 4 physicians, maintaining the status quo will allow Dr. C achieve her FI goal of $4 million after about 28 years, most likely approaching age 60.

The Timing of a Sabbatical Matters

The January to December sabbatical costs her a bit more, because she is unable to spread her income out over two calendar years and take advantage of lower tax brackets in those years. She is also unable to make any tax-deferred retirement contributions or receive a match in her year off.   That difference ends up costing her an additional $73,000 after 29 years, adding about 3.5 months to her time to FI when compared to the June to July sabbatical.  In this scenario, the 12-month sabbatical extended her time to FI by 23.5 months.

What about the 1-year deferral? Shouldn’t that have the most damaging effect, since the lost wages would rob her of so many years of compounding? It would if we assumed that she had a $160,000 spending habit and earned nothing during that deferral year. Of course, most new college grads are not spending like a doctor who brings home $300,000. Most likely, she was still living like a college student, and finding a way to make ends meet while enjoying her year off.

For the sake of this comparison, I’m assuming her year off in her early twenties was a break-even year. No savings, no debt, just a year of coasting, most likely with at least a part-time job. Therefore, FI is delayed by exactly one year, and she will always be one year behind where she would have been if she had not hit the brakes for a year before starting down the path towards becoming a physician.

In essence, future Dr. C borrowed one year from retirement and used it early in life. During deferral, she has youth and health on her side, but very little money. Foregoing deferral, she will be able to retire a year earlier, but won’t have youth, and may not have the health she enjoyed in her twenties. She will have plenty of money, though!

Having looked at the numbers, does a sabbatical appeal to you? Would you take a mid-career sabbatical over a deferral year? Sound off in the comments section below.

14 thoughts on “4 Physicians Revisited: Dr. C & the Impact of a Sabbatical”