Welcome to another entry in Blogger’s Corner.

The most exciting news is related to a little scorecard that a blogger can access by downloading the Alexa toolbar. As I frequently state, I heart numbers, so I peak at these numbers fairly often. The site passed a couple exciting milestones this month, ranking in the top million worldwide, and in the top 100,000 in the USA. 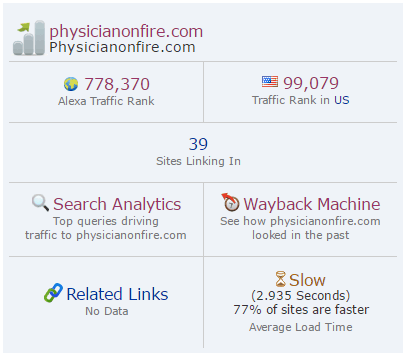 Apparently my site is slow. I blame that at least partially on the large banner pictures that take up some valuable real estate. I have no plans to change that. I enjoy featuring my photography and finding new images to add to the growing portfolio of banner images (currently north of 200).

I continue to contribute past articles to Physician’s Money Digest, and plan to increase my posting there to twice a week. Eventually, I’d like to get caught up and start posting original material there. My latest contribution was ‘It’s Good to Be King’: The Benefits of Financial Independence.

In other exciting news, I have added my first two site sponsors, and will be adding more in the coming weeks. My sponsors have agreed to support this site and its charitable mission in exchange for featured advertising space.

Site sponsors provide services and products that I believe can be helpful in your quest for financial independence and/or enjoyment of an early retirement. If you are interested in being a sponsor, please contact me.

Coming up this week will be posts detailing this frugal physician’s recent trip to San Francisco and northern California. Stay tuned if you like pictures of skylines, breweries, and goats!

A couple cool things happened in the last eleven days. Momentum continues to build. Loyal readers are returning faithfully to read new posts, and new readers are discovering the site.

My first submission to Physician’s Money Digest, The Top 5 Reasons to Retire Early, went over swimmingly, reaching #1 in “Most Popular” for a day or two. 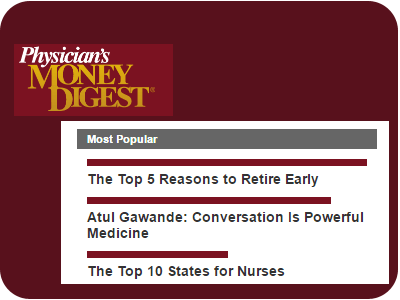 My second article on the site, A Physician’s Guide to Retiring at 45, is online today.

I also had another post, How this doctor achieved financial independence at age 39 appear @ KevinMD which has sent a fair amount of traffic my way. It was submitted by Fulfilled Physicians, where the post made its debut under a different title.

Maybe the most awesome thing that happened this week was a shout out from Mr. Money Mustache, who not only somehow knew about my KevinMD post a few hours after it was posted, but also put up a link for his all his fandom to see (in the comments section on his latest post about leveraging the power computer technology). Thanks, MMM!

Thank you, readers, for helping make this site an ongoing success!

A big thank you to all of those who visited the site this last week, a week that is currently the site’s Best Week Ever. I don’t expect it to hold the title for long, but the week of 5/2 to 5/8 was the first week in which the site averaged over 1000 pageviews a day, with a grand total of 7,844 for the week, smashing the record of 6,013 from four weeks earlier.

I also switched from a standard blog page to a Static Front Page, making many past posts much more visible without searching the archives. I find the new look to be user friendly, making navigation and selection of posts easier for visitors. There was a fair amount of trial and error involved. I feel sorry for the couple of readers that were trying to navigate the site last Sunday night as I implemented the changes!

Since making the change the evening of May 1st, Google analytics shows the session duration and pages / session increasing, with the bounce rate decreasing. These are good things. If you have a blog and haven’t considered a static front page, you may want to look into it.

A funny thing happened today. A friend of the site told me that my abbreviated moniker, PoF, was very similar to one used by Plenty of Fish. I thought that sounded like a cool band name. Maybe they’re a Phish cover band. Do they do covers of songs that Phish covers? A Phish cover cover band???

No. Supposedly, ignorance is bliss, but ignorance can be really embarrassing. Apparently, Plenty of Fish is a very popular free online dating site. Truth be told, I did google “pof” a couple months ago to see what came up. I clicked on the first result (pof.com) and it looked like a site that I shouldn’t be spending time on, and didn’t look very professional, so I moved on and didn’t think twice about it. When you’re happily married for 9 years, you don’t know about these things, for better or worse (and for richer or poorer, etc…).

I revisited that other site very briefly and I see that they capitalize all the letters when they use the acronym. So that site can be POF and I’ll stick with PoF utiliziting a little o, but if you see me use the abbreviation less often, you now know why.

Thanks for stopping by!