In many professions, there seems to be a direct correlation between the cost of living and the salary potential. For those in finance, real estate, and law, the biggest salaries tend to be achievable in the highest cost-of-living cities.

If you want to make big money, you’ve got to head to the big city. New York, Boston, Miami, Chicago, Los Angeles, San Francisco. Places where $1 million dollars may or may not get you three bedrooms and two baths.

With some success and perhaps luck, the salary differential may be more than enough to make up for the increased costs associated with these large cities.

Arbitrage, the practice of taking advantage of different prices in different markets, is a strategy that can be employed in personal finance. There’s tax arbitrage, dividend arbitrage, and apparently a Richard Gere movie called Arbitrage. I’d like to discuss a different type of arbitrage today, geographic arbitrage.

What is Geographic Arbitrage (a.k.a. Geoarbitrage)?

Those of us practicing medicine are subject to a fairly unique pay structure. We’re needed everywhere, not just at corporate headquarters. Supply and demand goes a long way in determining our salaries.

Apparently, many of us prefer to live in larger cities, which creates a larger physician supply and lower demand for our services, driving down the salary potential. Fortunately, some physicians would rather be surrounded by farmland and feedlots rather than freeways. For this, they are rewarded handsomely.

Using Doximity’s Salary Map, we get a nice overview of nationwide salaries on a county-by-county basis. The heat map for my specialty, anesthesiology, looks like this. The purple counties represent an average salary in the $350,000 range, whereas the deep red counties exceed $410,000.

You’ll notice quite a few gaps on the map, particularly in the sparsely populated areas of the Great Plains. Let’s dial up the heat map for a more common specialty, family medicine.

The blanks have largely been filled in with a deep shade of red, confirming that there is a distinct increase in salary to those who are willing and able to live in more rural areas of our great nation. The discrepancy isn’t huge, but the range is from about $210,000 to over $250,000.

How is the outlook for our general surgery colleagues? The heat map looks strikingly similar, with a range starting around $330,000 to better than $380,000.

Geoarbitrage and cost of living

It’s helpful to know that you can earn 15% to 20% more by living in middle America. Salary is only one component that helps determine your ability to boost your savings rate; expenses are another key factor. Where do you suppose it costs more to live? I think we already know the answer, but I heart numbers, so let’s dive into some real data.

According to Doximity, a general surgeon in New York City can expect to earn about $333,000. Meanwhile, his pheasant hunting counterpart in Sioux Falls, South Dakota will pull down better than $383,000, a difference of $50,000.

The internet is not suffering from a lack of cost of living calculators. We’ll look at a couple results to compare the cost of living in Manhattan to Sioux Falls.

According to CNN Money, a surgeon earning $330,000 in New York would need to earn $137,232 to live with similar spending habits in Sioux Falls. Conversely, the physician in Sioux Falls earning $380,000 in Sioux Falls would require $913,781 in Manhattan to enjoy the same level of spending there. 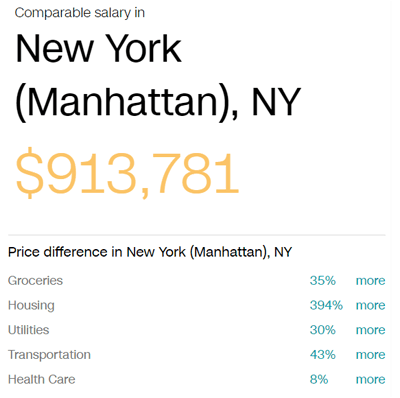 Sperling’s Best Places is apparently using a different data set, but comes to a similar, if not quite as striking conclusion, probably because the comparison was for New York City, but not Manhattan specifically. The conclusion is that New York is 76% more expensive, and a salary of $670,588 in NYC would be the equivalent of $380,000 in Sioux Falls.

Is it all about the money?

Clearly, compensation and your ability to save are very important to your financial well-being, but they are not the only considerations in your overall well-being. Other factors need to be considered, and may very well carry more weight.

Proximity to family is vital for many, particularly if you have plans to start a family of your own. Familiarity and friends may be high on the priority list as well.

Some subspecialists are going to be geographically limited. Laramie, Wyoming probably doesn’t need multiple pediatric neurologists. They might be lucky to have one that travels to see patients in town once or twice a month.

Academic medicine can only be practiced in academic centers. North Platte, Nebraska has none, although they do have the world’s largest rail yard.

Then of course, there is the need for culture / restaurants / museums / shopping / diversity / professional sports teams, etc… If you have a burning desire to be surrounded by them all day every day, a medium or large city might be the only place you can be happy.

If, on the other hand, you can live with limited access to these things some of the time, with the ability to travel to the big cities at other times, you might find you can be happy in places you might have never dreamed of considering.

Living in middle America, with an extra $50,000 a year in salary, and drastically lower living expenses, you can have a very generous travel budget.

When you live in a small town like I do, your commute doesn’t have a rush hour, and may not even involve an automobile. I ride a e-bicycle to work when the weather allows, and there’s no place around town I can’t be in about 20 minutes on a bike. More exercise for me, less wear and tear on the car, and more money in my pocket.

Small town living isn’t for everyone; my wife and I both grew up in small towns, so it suits us well. I’m not trying to convince you to move to the cornfields of western Iowa or the mountains of Montana. As I often do, I’m simply presenting a less ordinary way to live, and the advantages that of doing so.

Geographic arbitrage, with a beautiful combination of a higher salary and lower cost of living, has worked very well for us.

Do you take advantage of geographic arbitrage? Could you see yourself living in middle America or another low-cost of living part of the nation (or world?) Why or why not?