Some prefer to ask whether or not one should pay off debt rather than how to pay off debt, but for the purpose of today’s discussion, we’ll assume that paying off debt is something that you want to do. I did, and I was happy to be debt free by forty.

The obvious answer is to send money to the people and places to whom you’re indebted. That’s how you pay off debt. But is there a best way to do that?

Dr. James Turner is here to explain a few different ways to approach your debts. This post originally appeared on The Physician Philosopher. 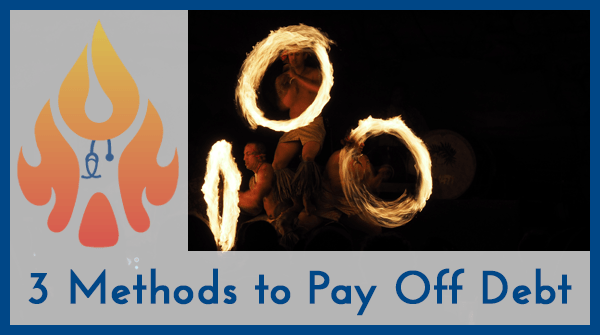 How to Pay Off Debt: The 3 Methods Explained

By now, a lot of you have heard the famous Dave Ramsey quote, “If you live like no one else, later you can live like no one else.”  Ramsey is known for being a proponent of attacking debt aggressively.  He proposes one method that I think works for the vast majority of Americans.  Yet, today I’ll argue that method isn’t necessarily the best way to combat debt for high earning medical professionals who are most concerned about their student loan debt.

In this post, I’ll discuss the three methods of paying off debt.  Then, I’ll tell you exactly how I paid off $200,000 in student loan debt in 19 months, and how you can use the same method to eliminate your debt quickly.

Dave Ramsey made the Debt Snowball method likely the most famous way to pay off debt.

The name of the method is meant to provide a picture of a snow ball starting at the top of a mountain.  As it rolls down the mountain (and crushes debt) it picks up more snow (more cash flow) and turns into a formidable snow boulder that can then crush the next debt very quickly.

To do this, you pay the minimum payment towards all of your debt, and then put any additional money towards your smallest debt first.  When that is paid off, use that money plus what you are currently paying to pay off the next debt.  With each debt being paid off, you’ll have increasingly larger cash flow to pay off the next debt.  Hence, its name – the snowball method.

If you are concerned with how to pay off debt, then this is certainly one method that has a successful track record.  However, the reason it is good isn’t because of the math.  It’s because of psyschology.

The reason that the debt snow ball method is good way to pay off debt is because it frames paying off debt in such a way that it provides better internal motivation.  With each debt that is paid off, you are encouraged that you are doing the right thing. As the snowball gets larger and larger, the encouragement does, too.

Most people that follow Ramsey’s method simply cannot see a way out of their mountain of debt.  For this reason, Ramsey’s goal is to prove early and often that anyone can eliminate debt.  After the first one is gone, it provides hope.

That is what the snowball method is all about. So, if you find yourself in a situation where you cannot imagine financial escape, cut your lifestyle down and start finding discretionary funding to chip away at the smallest debt you have.  If you have student loans – and aren’t planning on pursuing Public Service Loan Forgivness – then you should refinance that debt to the lowest interest rate and get a great cash back bonus.

In the end, this method has been shown to have a higher compliance rate than the avalanche method.  But at what cost?

Some would say that the Snowball technique is not the best method when considering how to pay off debt.  A second method is called the Avalanche Method.  (These people are obsessed with snow!)

The idea here is the opposite of the snowball method.  Simply locate the highest interest rate debt you have.  Take any additional money you have above your monthly minimum payments and start hammering away.

The more you can throw at it, the larger the avalanche, and the sooner your debt will be gone.

The Math Behind the Avalanche Method

The snowball method encourages you to pay off your smallest debt.  Not your most expensive or highest interest rate debt.  Assuming 100% compliance to both methods, you will pay more interest using the snowball method.

Second, there is an issue that isn’t commonly discussed when comparing these two methods.  For people who have refinanced their student loans (hopefully using a student loan refinance ladder), there isn’t always a guaranteed forgiveness upon death.  However, if you do die, your spouse can simply sell your car and not have to worry about it anymore.

Simply put, the type of debt that you have matters.

Both methods above will work to pay off debt.  However, neither of them is ideal for many medical professionals who feel an overwhelming need to crush their student loans first.

So, I didn’t use either of those methods.  I used what I affectionally call the “Snow Plow” method.  See, I absolutely hated my student loan debt.  So, in keeping with the snowy debt theme, I painted a mental image of all the various piles of snowy debt that I had.  Then, I picked the one I hated most and drove my snowplow right at that debt until it was gone.

This was accomplished through three specific techniques.  We paid the minimum payment on all of our debt akin to the snowball method, but then we focused a concentrated high monthly payment on our student loans (our least favorite source of debt).  Then, according to The 10% Rule, we limited our lifestyle creep and applied 90% of any additional bonuses, increases in pay, or surprise money towards our Snow Plow’s target.

Using this method, we paid off $200,000 of student loan debt in just 19 months.  We reaped the psychological benefit of the snowball method, without sacrificing as much additional accrued interest.  It was a win-win for us, and it may be for you to if you are considering how to pay off your debt.

How to Pay Off Your Debt?

Honestly, this is a tough question to answer.  It depends on your pyschology of money, your ability to sustain your course, and how much you hate the various forms of debt that you have.

So, how should you pay off your debt?  The first answer is to avoid lifestyle inflation so that you have discretionary income to apply towards one of the three methods mentioned above.

The second answer depends more on your personality.  If you have a personality that can visualize a plan, stick with it, and do what needs to be done… the Avalanche Method is going to win every time.

However, if you know yourself and need the small “wins” to keep you going, the snowplow or snowball method may still be your friend.

Regardless of which snowy debt pay down path you travel, the take home is to pay down your debt.  Make a goal, write down a date, and chase after it!

Paying down debt is paramount to financial success for most early career physicians.  For this reason, you should know that there are multiple methods to this madness.

However you ski this course, make sure that you pick one path and stick with it.  In the end, sticking with it matters infinitely more than which method you chose to use to attack the problem of debt.

Which method do you use to pay down your debt?  Snowball, avalanche, or snowplow?  Leave a comment below on why you chose your method.

3 thoughts on “How to Pay Off Debt: The 3 Methods Explained”