Has an insurance agent committed a sin against you?

I’m happy to say that I have not been sinned against, to the best of my knowledge, by any insurance agents. My interactions have been fairly limited, and I only reach out  when I have a specific need. I also know that for certain types of insurance, an independent agent is the only way to go.

However, I do know many people who feel they’ve been wronged by an insurance agent. The mistakes they’ve made as a result of being misled can be costly to the tune of tens of thousands of dollars.

Dr. Jim Dahle is a friend of mine who was duped into buying a life insurance policy that made no sense for him at the time. Since then, he has amassed a wealth of knowledge on the topic and has helped tens of thousands of people avoid making the same mistake he made. These, in his estimation, are 6 of the greatest sins perpetrated by certain unscrupulous insurance agents.

This post originally appeared at The White Coat Investor.

I am often accused of being anti-financial advisor and anti-insurance agent. While I think any physician with a reasonable amount of interest and discipline can learn enough to be her own financial advisor, I certainly don’t see the role for a financial advisor giving good advice at a fair price disappearing. My best estimate is no matter how many people read this site, at least 80% of doctors will want and need a good financial advisor, and I don’t have a problem with that.

When it comes to insurance agents, however, just about every doctor is going to need to buy some policies through an independent insurance agent several times during life. Without serious structural and legal changes (you’re basically not legally allowed to buy a life insurance policy or buy a disability insurance policy without some agent somewhere getting a commission on it) that fact isn’t going to change any time soon.

However, there are a lot of insurance agents out there doing a serious disservice to their clients. In this post, I’m going to illustrate what I see as the six greatest of their sins. 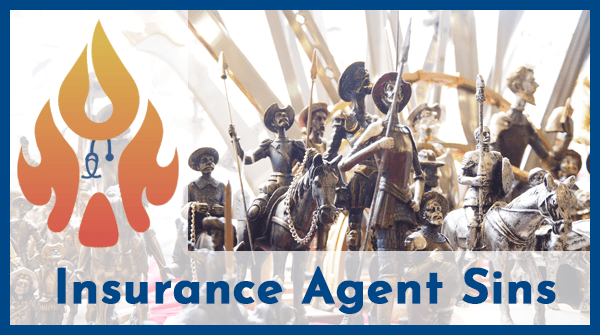 Most of my readers might have assumed that my biggest beef with insurance agents is selling whole life insurance. Nope. The biggest problem I see is that far too many doctors and other high-income professionals don’t have adequate term life insurance.

I’m not sure if that is because doctors don’t understand the importance of term life insurance, if agents make the process too confusing, if agents simply don’t understand what people really need, or if they are simply blinded by the huge commissions available on expensive cash value policies. But it is true. There are lots of examples of this.

I see doctors who are sold a 5-year term policy at age 30. That’s dumb. Your term ought to be long enough to get you to your likely date of financial independence unless you want to do the annually renewable term thing. Maybe the agent is thinking he can sell the doc another policy in 5 years and get another commission. Or maybe the agent actually thinks it is a good idea to convert that policy to a cash value policy in 5 years (it isn’t.)

I see doctors who are sold a $350K policy. Give me a break. The likelihood of that being the right amount of insurance for an attending physician is very low. It’s like agents following these rules of thumb like “Buy 10 times your annual income in insurance.”

So all of a sudden a graduating resident goes from needing $500K to $3 Million? And a doctor who is financially independent but making $500K needs $5M? I hardly think so.

Figure out what you want insurance to do if you die (pay off the mortgage, start a college fund, provide for spouse from now until death at a 3-4% withdrawal rate), add it all up, and round up to the nearest million. It’s not that complicated, but if you’re reading this site, the face value on your term insurance should almost surely be a seven-figure amount.

Learn how to better manage your student loan debt, and explore refinancing to a lower rate with cash back offers! Student Loan Resource Page 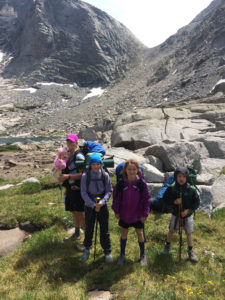 All smiles before ascending Texas Pass

I can think of a few good niche reasons to buy it, but that certainly doesn’t explain why nearly every doctor has been pitched whole life at some point in his career and I would guess 1/3-1/2 have actually purchased a cash value policy of some type. Then (hopefully) at some point they become financially educated and have to decide whether or not to keep it.

There aren’t enough people out there who actually need it (or want it once they understand how it works) for you to stay in business selling it. There should only be a few agents in any metropolitan area who become experts in it and then sell this stuff and you can just refer the rare client who needs it to them.

Otherwise, you’re going to get to the end of your career, realize what you’ve done, and be embarrassed about your life’s work. Sell people the life insurance policy they need the first time — a big fat term policy that will last until they’re financially independent.

I did a whole post on this one. There is simply little excuse to sell someone a life insurance policy on their children. I mean, I guess I could justify a $10K “burial” policy for a family for whom $10K would be a huge financial burden, but even that is a stretch. With most companies, not only do kids not get the best health class for insurance on them until they reach adulthood, but you can’t even buy a term policy on them until they’re 20.

Some agents may push the idea that “you’re locking in insurability” in their youth and buying a policy “when it’s cheapest to do so.” But the fact is you’re buying them a whole life policy (which they don’t even need) when you should be funding a Roth IRA (earned income), a 529 (college savings), or a UGMA (everything else.)

Even if your goal were to lock in insurability, this isn’t a great way to do that unless the policy has a rider allowing you to buy a 7 figure amount of insurance later. Now, if the policy gave the kid $10K of insurance now, and the right to buy $1 Million at age 25 no matter what health he was in, I could understand how some people might want to buy it. But that isn’t usually what you get.

What the parents are suckered into buying is a $50-100K whole life policy, which is totally inadequate as compared to that kid’s future adult insurance needs. I guess it’s “better than nothing,” but not by much.  Your widow and orphans need $2 Million and you’ve left $50K. Nice job buddy.

And this nonsense about saving for college in a whole life policy is even dumber. These tiny policies are lucky to break even in the 18 years you have to save for college. If you’re buying life insurance from the same company you buy baby food from, you’re probably doing it wrong.

# 4 Trying To Be A Financial Advisor

I don’t know if they teach this in that week-long insurance agent school, but trying to sell yourself as a financial advisor when you are a commissioned insurance salesman is a huge sin in my book. Being an insurance agent is a noble career, all by itself. You are providing for widows, widowers, and orphans.

You are allowing people to take risks with their lives that they otherwise would not be able to take, benefiting them in the long run and boosting the economy. What’s wrong with just being an insurance agent? Nothing at all.

First, get some outside education. If all of your education is provided by an insurance company, how good of an advisor do you think you can really be?

Second, get a real financial advisor credential. For an agent, that means a ChFC or better yet, a CFP (see the theme? — Get an education from outside the insurance industry.)

In fact, in order to get sold, the WORST investments pay the HIGHEST commissions. I don’t care how good of a person you are, that’s a tough conflict of interest to fight against every day for your entire career. So you need to do financial planning and investment management on a fee-only basis. I prefer a retainer or an hourly rate, but even an asset under management fee is okay if it isn’t too high and if it drops rapidly as assets climb.

Long term care insurance has issues. It really isn’t ready for primetime. That said, a reasonable case can still be made for it for a certain segment of society. That segment is for couples with a six-figure portfolio.

For example, if you are retiring on Social Security and a $200K nest egg, and one of the partners ends up in long-term care for 5 or 10 years, that could deplete the entire portfolio and at death not only does the Social Security income decrease for the remaining partner, but the nest egg is also gone. Even with a $600,000 to $800,000 portfolio, that’s a possibility. But for those with a 5 figure or 7 figure portfolio, it is probably better to avoid purchasing long-term care insurance.

The 5 figure portfolio folks are going to be better off saving the premiums. They’ve probably got a better use for their money, and if someone goes into a long-term care situation, they can simply spend down to Medicaid levels.

The 7 figure portfolio folks can self-insure against this stuff. The average cost of long term care is around $50K a year. Look up your state averages here. The average nursing home stay is 2-3 years. So even if you end up spending more than average for 2 or 3 times as long as average, you can probably still self-insure this risk without leaving your spouse impoverished.

Everybody doesn’t need long term care insurance. Stop trying to sell it to everyone.

# 6 Not Being An Independent Agent

Why would any single company be the best company for every type of insurance for every person? It doesn’t make any sense. Yet many agents are “captive” and sell insurance from only one company. That means that a significant percentage of the time they either have to send the client away and not make a commission or worse, sell them a policy that isn’t the best policy for them.

Again, do you want to get to the end of your career and think about how many people you’ve hosed for a living? Of course not. Do the right thing and go independent.

If you’re not good enough to make a living as an independent agent, you probably don’t belong in the insurance business anyway, so do the rest of the agents in the world a favor and get out so they can make a decent living.

There you go. The six greatest sins of insurance agents. If you’re an agent, stop committing them. If you’re a client, don’t associate with agents who do. Run those guys out of business so the good guys and gals can make a living and the rest of us can get all the insurance we need and none of the insurance we don’t.

What do you think? Agree? Disagree? What else would you add to the list? What sins have agents committed against you?