How do you find and fuel your passion?

When I daydream about my early retirement, I get lots of ideas and before long, I have too much planned than I will have time for. Eventually, I’ll be able to strike some experiences off the list, and the roster of ideas may become more manageable.

Or, exploring one avenue may lead me down several alternate paths, and I’ll be busier, while learning more and having more fun, than ever.

Others may know exactly what they want to do with their free time. And they may devote vast amounts of time and resources to following that passion and making their dream a reality.

One such man is Tom Lakenen.

Tom, at age 53, is not retired, but he works a unique schedule that affords him plenty of time to devote to his passion.

What is that passion?

Take your favorite hobby, and imagine it has a volume knob. And that knob goes to eleven. Good. Now turn it to eleven.

Now, imagine that hobby is creating art in the form of sculptures from scrap metal. Next, create more art than you can fit on your own backyard.

Next, refinance your mortgage to purchase 40 acres outside of town between the highway and the snowmobile trail. Create a long and winding road so that visitors can drive, walk, bike, or snowmobile the path among the sculptures you place there for the public, free of charge. 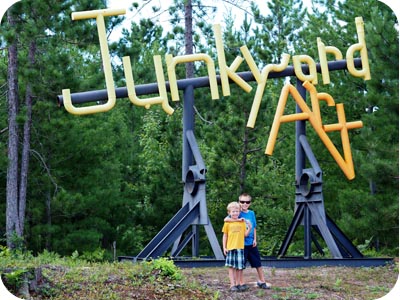 This sensational place, that previously existed only in a Dr. Seuss tale, needs a name. Your name. Lakenenland it is. 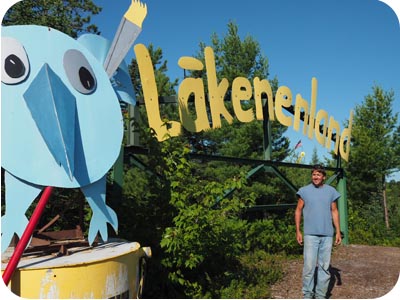 Lakenenland rivals Gerald McGrew’s Zoo with about 7 dozen sculptures, some of which are nearly 30 feet tall, but it’s missing something. Fishing ponds? Yes, add a couple of those. 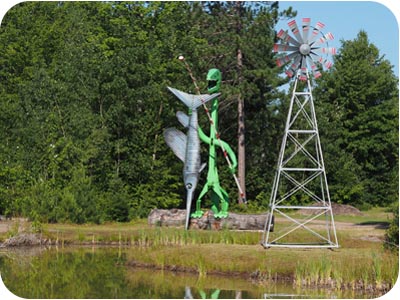 An elevated bog walk? Definitely. A firepit for the snowmobilers? Absolutely. How about a performance stage, a picnic pavilion, and the fanciest outhouse you ever did your dirty business in? Check, check, and check. 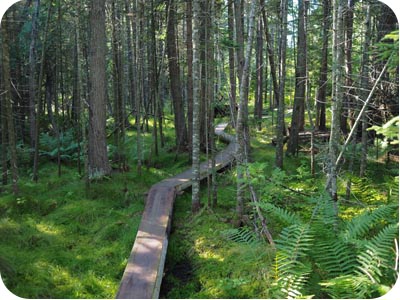 Since Tom started creating Lakenenland outside of Marquette in Michigan’s upper peninsula in 2003, he has added all of the above and then some. The magical place is open to the public year-round and it doesn’t cost a dime. Well, not to the thousands of annual visitors, anyway.

As an occasional visitor, I’ve become more intrigued by the roadside attraction, more interested in the story behind it all, and more impressed by the never-ending expansion. Some pieces tell a story; others make a statement. Some look like they belong in a town square; others are kitschy fun. Some clearly have a very personal meaning for the sculptor.

I’m an anesthesiologist, not a journalist, but I do have a voice and a growing following, so I decided to reach out to the man behind the welder’s mask via e-mail. Tom graciously agreed to meet with me at a mutually agreed upon spot. Lakenenland, of course. 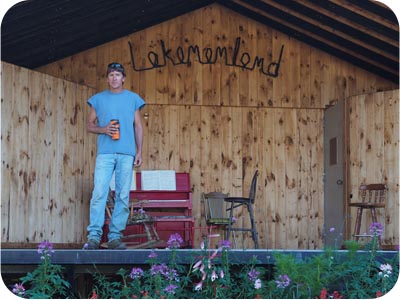 I had planned on arriving between 11 a.m. and noon, but got an early start to my day and showed up before 9 a.m. As I pulled in, there was one couple parking in the lot, and a teenager whipping weeds in the ditch.

The teenager stepped out of the ditch and removed his goggles, greeting me with a smile, and I realized that he was no teenager, but a youthful appearing man in his early fifties who does absolutely everything on the property, including whipping weeds in ditches. 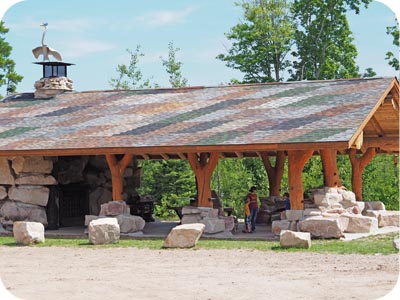 Tom suggested we grab a seat in the shade of the one-of-a-kind pavilion. He offered me coffee and some cookies that were destined to be shared with other guests via the cabinets alongside the firepit, where a fire was still smoldering from the night before. 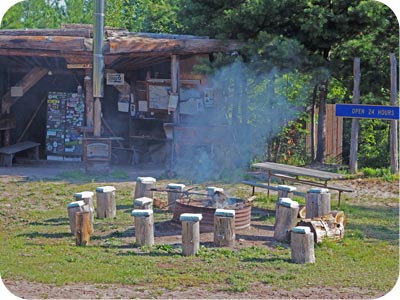 Over the course of about 80 minutes, the friendliest rebel you’ll ever meet shared stories about his past, his park, some local politics, and candidly answered the questions that had been on my mind since my first stroll through the park a couple years ago.

Tom was not a fan of authority in high school.

He found a way to spend the entire school day at a local trade school learning to weld. The high school insisted that he at least step foot on school grounds each day to receive credit for coming to school or he wouldn’t graduate. Tom called their bluff, not wanting their rules to interfere with his ability to get the most out of the trade school opportunity.

He graduated from high school and joined the Pipefitter’s union at age 18 as a welder. After about 20 years, at the end of which there were major issues with the pension fund, he transitioned to the Boilermakers union, where he has spend the last 15 years or so. 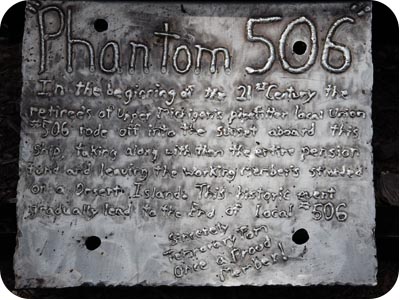 In the beginning of the 21st Century the retiree’s of Upper Michigan’s pipefitter local Union #506 rode off into the sunset aboard this ship, taking along with them the entire pension fund and leaving the working member’s stranded on a Dester Island. This historic event gradually lad to the End of local #506. Sincere, Temporary Tom Once a Proud Member!

The boilermaker job is what Mike Rowe would describe as a dirty job. It typically requires living on location near a coal power plant, working seven 12-hour days a week, tearing out tons of machinery to be replaced in the spring and fall when the plants can afford to be idle.

When Tom was about my current age of 40, he was working hard and drinking harder.

When I was in college, some of my friends’ colleges celebrated an unofficial case day once a year, a day in which some people I know would test their tolerance and stupidity in an attempt to put away an entire case of beer in 24 hours.

For Tom, case day was a Tuesday. And Wednesday. And Thursday. Etc… In fact, he said it about 30 beers a day, and yes, I could share that with you. With a young family at home, his wife gave him an ultimatum. Tom chose wisely.

With newfound time on his idle hands, Tom started collecting scrap iron from his jobs and cutting and welding them into animals and other unique creations. When his back yard filled up, a piece or two ended up in the front yard. The township Board called it signage, which wasn’t allowed in a residential area.

Tom is not a fan of authority in adulthood.

When he couldn’t reason with the Chocolay township Board, he began looking for a new home for his sculptures. He found a man with 40 acres, minus a 2.5 acre easement for the recreational trail passing through, about 8 miles from home, for better or worse, in the same township. 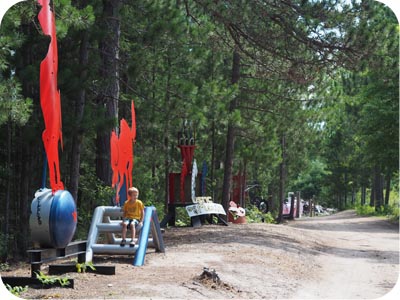 He put up a sign, cleared out some brush and stumps, and started placing his sculptures around the property in 2003. Over the years, the sculptures have multipled, and features have been added. His mother created signs for the bog walk. 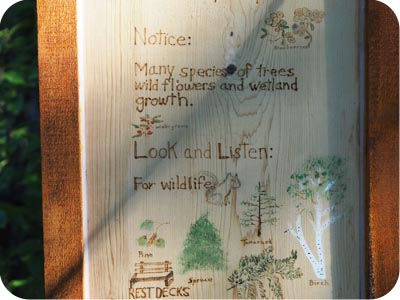 His father has been memorialized, along with the son of the man who provided two massive railway frog points in this nearly finished piece that makes the accurate statement “Cancer Sucks.” 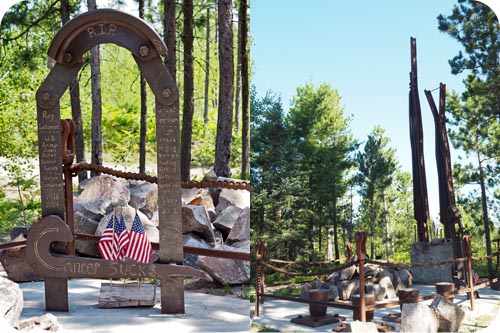 Tom is a generous man, not only making his fantasyland open for free to almost everyone (no trespassing for Board members), but he also hosts daily fires for snowmobilers in the winter, complete with snacks, coffee, and hot chocolate. He built a log shelter and outdoor toilet for hikers on the North Country Trail. 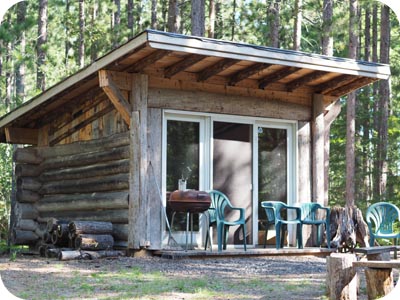 How does he fuel this passion?

Tom is not a wealthy man; he will not be retiring early. He is relying on at least one, and hopefully two pensions and social security, and he plans to work another 12 years or so.

Nearly all of the materials for his sculptures and structures have been given to him or collected from his various job sites. He occasionally spends $100 here or $200 there, or barters with items of nominal value, like a box of donuts.

He does accept donations, although he refuses to consider non-profit status. Too much governmental regulation. He occasionally checks the donation box. Several years ago, Dr. Ken Buran asked him if he had checked the box recently.

The answer was “no,” and Tom was pleasantly surprised to find a $2,000 check from the good doctor that had been sitting uncashed for months. Tom was wanting to build a pavilion, and Dr. Buran gave him the additional $10,000 he would need to do it right, and got his name engraved on the massive fireplace. 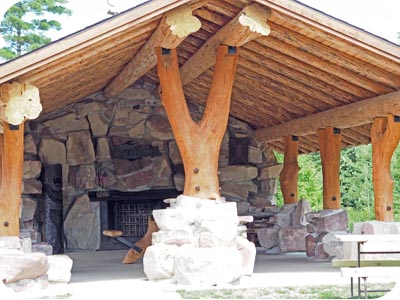 Donations like that are hard to come by. Tom’s stepson started a GoFundMe campaign on his stepfather’s behalf, hoping to raise $10,000 to help fund several projects at the park.

Click here to Join Curizon and you'll also be entered into a drawing for an additional $250 to be awarded to one new registrant referred by Physician on FIRE this month.
Tom would like to replace some sandy and muddy areas of the winding road with gravel. He’s got a gifted hull of a thirty-foot boat that he would like to use as the overhead canopy in a not yet built boardwalk through the cedar bog. He’s got mental plans for a large deck in front of the Lakenenland sign.

Tom is not retired, or even semi-retired, but I think I’ve got a good sense of what will keep him busy when he is. In the meantime, Tom works crazy hours on location in the fall and spring, leaving his summers and winters free to create, curate, and maintain his passion project.

What is Your Passion?

It is often said that you should plan on retiring to something, not just from something. I found Tom’s story to be profoundly inspirational.  Some people build ships inside bottles to display on their mantle. Tom builds massive and creative sculptures to display in his own namesake Land. And he’s not even retired yet.

Imagine what he’ll be capable of doing when he’s got 365 days a year to devote to Lakenenland.

Personally, I don’t know what my passion will be. If the next 40 years are anything like the first 40, I will probably jump from one interest to another, and I could rattle off a dozen or more hobbies and fields that I’d love to explore in greater depth.

How can you help?

Visit Lakenenland & Say Hi to Tom for me. Michigan’s Upper Peninsula is beautiful!

-> How to improve your happiness and satisfaction

->An effective way to balance all your responsibilities

Letter to the Editor from Tom Lakenen: Lakenenland being harassed by township 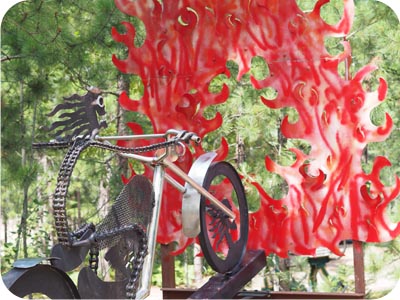 [Disclaimer: Prior to reaching out to Mr. Lakenen about a week ago, we have had no financial or other relationship. Now, I consider him a friend.]

26 thoughts on “Find & Fuel Your Passion: Lakenenland, A Yooper Story”

The Blue Cash Preferred card offers 6% back on up to $6,000 a year in grocery store purchases and 6% back on popular streaming services. 3% back on gas station & transit purchases, 1% back on all else. $95 annual fee waived the 1st year.