It’s a common conundrum. What to do with an old 401(k) when you switch jobs?

The second and final hospital job I took also offered a 401(k). It had great investment options with ultra-low fee index funds available and low fees across the board. I arranged for a rollover from my old 401(k) to the new 401(k).

At some point, I will likely roll over the balance from my hospital 401(k) to my solo 401(k) but I’m in no hurry to do so. I would mainly do it for simplicity’s sake. 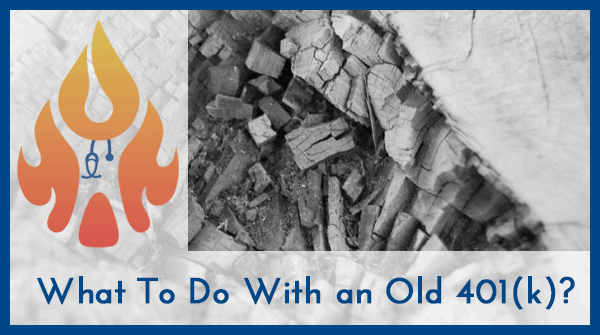 Q. I just changed jobs and was wondering what to do with my old 401(k). Should I keep the accounts from the old job and new job separate? Should I convert it to an IRA?

A. You really have five options with an old 401(k) or 403(b) and need to choose from them based on your situation.

If your old 401(k) had low expenses, or if there were some unique investment options such as the TIAA-CREF Real Estate Fund, a nice stable value fund, or the TSP G Fund, or if your new 401(k) has lousy options or high expenses, then just leave the money in your old 401(k).

Usually, there’s no problem with that as long as there’s more than a couple of thousand dollars in the account, but check your 401(k)Plan Document to be sure.  This is what I did when I left the military since the TSP not only had rock-bottom expenses, but also the very unique G Fund.

#2 Roll It Over To A Traditional IRA

This can be a great option if you’re not interested in a Backdoor Roth IRA.  Most docs either ARE or SHOULD BE interested, so this probably isn’t that good of an option for a high earner.

The benefits of a traditional IRA over a 401(k) can include lower expenses and more investment options.

Keep in mind that rules get a little more complicated if any of your 401(k) is a Roth subaccount.  When rolling it over to an IRA, tax-deferred money goes into a traditional IRA and tax-free money goes into a Roth IRA.

I have read but have been unable to confirm in an IRS document that EARNINGS on tax-free money go into the traditional IRA unless the account has been open for at least 5 years.  Keep in mind that if you’re near retirement age, the rollover resets the 5 year period before you can take Roth distributions, so you might not want to do that.

#3 Convert it to a Roth IRA

Sometimes it’s just easier to bite the bullet and pay the taxes.  This is a good option if both 401(k)s suck, if the balance isn’t that big, and you have money elsewhere to use for the taxes due, and you DO care about backdoor Roth IRAs.  Or perhaps you just want more Roth space for some other reason.

If you want to have the Backdoor Roth IRA option, and your new 401(k) is clearly better than the old one,  or if you highly value simplification of your finances, then the easiest thing to do is often to just roll the old 401(k) into the new one.

Keep in mind with a Roth 401(k) that this resets the “5 year period” to the establishment of the new Roth 401(k), so be careful if doing this just before retirement.  If you have an even older 401(k) that you kept in the past because it was good (like my old TSP account) you could also roll it into there if the plan allows it.

You can always take the money out, pay the taxes and penalties due, and spend it on a boat.  I told you there were 5 options, not 5 good options.  If you have a tiny balance in the 401(k), this is sometimes the easiest thing to do.

I suppose if you’re over 59 1/2 and beginning to spend 401(k) money (perhaps only working part-time and relying on retirement money for part of your income), you might as well start 401(k) withdrawals now, making this a more reasonable option.