Inflation has been known to destroy wealth.

While we haven’t seen significant inflation in recent years, and have even flirted with deflation, double-digit inflation has occurred in this country during my lifetime. Granted, I was only in kindergarten and oblivious to the rising prices, fuel shortages, and outrageous mortgage rates that the grownups were dealing with, but it’s important to recall that inflation is real and can rear its ugly head.

So what investments out there might be most impervious to inflation? Dr. Peter Kim would like to tell you about one of them.

I thought I’d take a look at why that might be.

First of all, what exactly is inflation?

Inflation is simply the rate at which the price of goods and services rises over a period of time. This can be detrimental for you as the value or purchasing power of your money diminishes.

Your dollar’s purchasing power diminishes over time. Does anyone remember when you could buy a soda for 50 cents?

In essence, although the number on the bill in your wallet hasn’t changed, it’s losing value just sitting there.

Why does inflation happen?

I have to start out by admitting that I am not an economist. I took a few courses on macro and microeconomics in college, but I am in no way an expert on the subject.

One big thing I do remember from back then is the concept of supply and demand. This is one of the most fundamental concepts of economics, and the main governing force behind pricing.

Supply and demand are linked and when one outpaces the other, there is a change in the economics or the pricing of a product or service tends to shift. This can ultimately lead to inflation.

To dig into it a bit, the most common reason for inflation is what economists refer to as ‘demand-pull inflation’. It occurs when demand outpaces supply. This leads to a willingness on buyers’ parts to pay higher prices for a highly desired product or service.

For example, imagine the scenario where the demand for a certain car is through the roof (maybe due to awesome new technology at a good price), but there’s not enough made for everyone to have one. People who really wanted the car might then be willing to pay even more to get their hands on it. You had better believe the car manufacturer will figure out a way to increase the price of it to meet that demand!

There’s also something called ‘cost-push inflation’ that occurs when demand remains the same, but the supply diminishes. An example of this is whenever there has been a shortage of oil, gas prices in this country skyrocket.

People also debate whether an increase in the printing of money causes inflation. The thought is that as you release more paper bills into circulation, the value of each of them decreases.

There have definitely been times in history when certain countries have tried printing money to revive their economy, and the result has been something called ‘hyperinflation,’ where the value of the currency plummets.

How is inflation measured?

So how is it most commonly measured?

Well, the US Bureau of Labor Statistics uses a metric called Consumer Price Index (CPI) to track it. It is the measure of the average change in the prices paid by consumers over time for a basket of goods and services.

These things include tracking prices of food, transportation, or health care, to name a few. 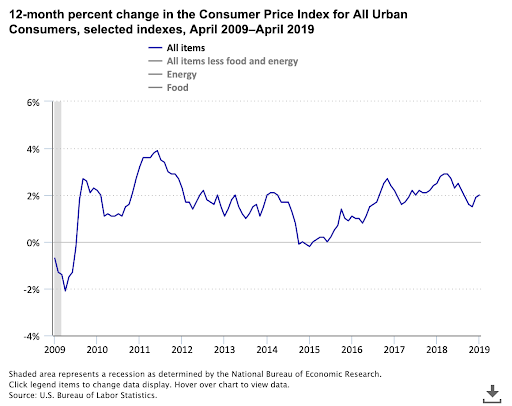 Is inflation is always a bad thing?

Well, Ronald Reagan once spoke these words, “Inflation is as violent as a mugger, as frightening as an armed robber and as deadly as a hit man.” Makes it seem like inflation is a pretty nasty character.

However, economists say that some inflation is not necessarily a bad thing because it forces people to not just horde their cash. If the value of it is diminishing, people will put that cash to use. It encourages some spending and investments and that helps to grow the economy.

Well, in this country, it’s the Federal Reserve that controls inflation.

“The central focus of what we are doing at the Fed is to keep inflation from accelerating – and preferably decelerating.” – Alan Greenspan

Without getting into the weeds, they use monetary policy to control inflation, prevent deflation, and try to help promote a stable economy.

Why is real estate inflation resistant?

Different economists, like Shiller, have tracked housing prices as an investment over time: 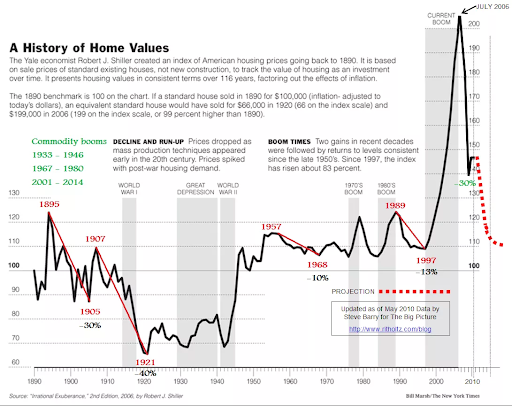 Through his studies and countless others, they’ve shown that housing prices over the last 120 years have followed the rise of inflation if not exceeded it.

That’s because, along with many other products (like bread and milk) mentioned before, housing isn’t a luxury, it’s a necessity. So people will spend money for housing. And just like the prices for those products will rise over time, so will the cost of housing.

Well, as inflation and the cost of goods goes up, so do wages to match. As wages increase, so does the cost of rent. So as a property owner, you’re able to increase rents to fall in line with inflation. That’s part of the reason if you’ve been a renter, the cost of rent seems to increase at least 3% each year.

If you took out a loan to purchase your home or a rental property, there’s a decent chance you used a loan at a fixed rate. If so, the appreciation of your house value may be increasing in line with inflation, however, your fixed rate payments will stay the same. You might be making a monthly payment of $5,000 for 30 years, but in those later years, that $5,000 that you’re still paying is actually worth less as a result of inflation.

So, as you can see, there are multiple reasons why real estate can provide a reliable hedge against inflation, and another added benefit of investing in real estate.

3 thoughts on “Are Real Estate Investments Resistant to Inflation?”