While it’s not necessarily true that what goes up must come down — sometimes prices rise and stay that way — when they rise as fast as they did, there’s bound to be some sort of deflation or at least a leveling off.

Today’s guest post from medical student Rui Bouça explores the data and indicators that point to a significant slowdown in the U.S. housing market.

Rui Bouça is a freelance writer, content marketeer and SEO consultant. He has a BSc and Masters in Economics, worked in the largest Portuguese bank, now attends medical school part-time, and currently writes academic and blog articles.  He just launched his newest website The Timeless Designer. 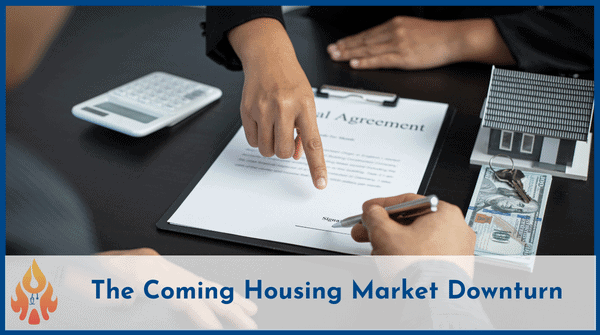 Despite the housing market’s skyrocketing during 2020 and 2021, the housing market is now cooling, and we may even be facing a recession. Housing prices have skyrocketed, and mortgage rates have reached their highest value since 2008.

Several facts support the thesis of the cooling housing market. On the supply side, we have a lower supply due to higher costs, which also pushes the prices of homes higher. On the demand side, we have higher interest rates which drive the cost of borrowing money and increase inflation. All of this makes it difficult to buy a house.

But still, even if we agree that the housing market may be on the verge of recession, why should you care? Well, spending on housing accounts for roughly 18% of the United States GDP. A housing market crash has enormous effects on the real economy and, consequently, on your pockets. This was made very clear in 2008.

So without further ado, let’s dive into the indicators that can reveal the housing market’s slowdown.

This past June and July, policymakers approved a 75-basis point rate increase and are planning to further that rise in their meeting later in September. This was the most aggressive rate hike since 1994!

Although the official interest rate doesn’t directly affect the mortgage rates, it indirectly affects it via two channels. On one hand, this monetary policy makes the cost of borrowing money to buy a home higher. On the other hand, it is one of the most significant factors influencing the 10-year Treasury yield. This, in turn, is what fixed mortgage rates tend to track.

In the pandemic, the small supply combined with low mortgage rates resulted in a bidding war between potential buyers who were making offers above the listing price. This continued to happen throughout 2021 and the first half of this year, which meant a giant increase in the housing prices.

3. Housing is Less Affordable and Renting Is Becoming More Expensive

The increase in mortgage rates yields a decrease in housing affordability. The National Association of Realtors’ Housing Affordability Index measures the degree to which an average family can qualify for a mortgage loan on a typical home. As the mortgage payments climbed 53.7 percent and the median family income only rose 5.8 percent in June 2022 compared to one year ago, June’s affordability index figure of 98.5 is the lowest since June 1989.

Unfortunately, rent prices have also risen during the pandemic. The average monthly rent was $2,031 in July, an increase of 13.7 percent compared to a year ago, according to data from Zillow. All this diminishes the real disposable income of every economic agent, which in turn increases the need for a side hustle.

4. New Listings Have Started to Drop and Home Construction is Slowing Down

For the first time in over 17 months, in August, the average home sold for less than its list price, according to the same report. In the same month, one in five sellers dropped their asking price. One year ago, that was roughly one out of ten sellers.

On the other hand, the construction of new homes has slowed down due to higher borrowing costs, the rise in material prices, and also the fear of the consequences of higher mortgage rates. According to data from Census Bureau, the monthly new residential construction fell to 1.45 million in July, which was a 9.6 decline from the previous month.

The NAHB/Wells Fargo Housing Market Index (HMI) is a monthly sentiment survey of members of the National Association of Home Builders (NAHB). It measures sentiment among builders of U.S. single-family homes. The index peaked at a 35-year high of 90 in November 2020, was 80 a year ago, and was roughly 50 in July.

What Should You Do As An Investor?

Amid this revolving housing market, the crypto market has also lost 70% of its value, and investors’ panic may affect the market even further. This begs for rationality when choosing investment platforms.

Since the US economy is still not officially in a recession and the job market is performing well, it’s too soon to make abrupt changes in your investment portfolio. However, avoid taking unnecessary risks at the moment.

The pandemic brought down low interest rates, propelling house prices through the stratosphere and mortgage rates to a low value. However, this year came along, and the increase in the price of  materials, the war in Ukraine, the escalating interest rates, high inflation, and the overall cooling economy are pushing the housing market towards a recession.

The signs are here:

All of this is happening in a scenario where the gross domestic product (GDP) has declined for two consecutive quarters, which can qualify as a recession.

With the 2008 shadow appearing upon us, we should ask ourselves, how did we get here again? That’s what this article intended to explain, and my take is that it’s too soon to panic, but it’s too late to see this as a mere economic fluctuation.

What signs of a housing market downturn have you seen?