Nisha Mehta, MD has been a prolific writer for other sites on the topics of wellness, burnout, and even personal finance. Finally, she’s writing for her own site. Nisha Mehta, MD: My WHY.

Podcaster Joshua Sheats of Radical Personal Finance shares his thoughts (in written form) on The Stages of Financial Independence. Which of the seven stages are you in?

We’ve been discussing the concept of “Enough” lately, but we really need a better word. The Swedes have one. From Minafi, Lagom: Swedish Minimalism for Enough.

Joel of FI180 stepped away from a high-stress computer gig a couple months ago. We got to hang out a bit in Florida a couple weeks ago, where he gave a great talk at Camp FI SE. Elements of that speech made it into his recent post in which he shares Lessons in Early Retirement.

Early Retirement often relies on the 4% rule that dictates you should save 25x your annual expenses. Four Pillar Freedom backtested a 100% stock portfolio and got astounding results. Here’s How the “25 Times Expenses” Portfolio Has Performed Over the Past 89 Years.

Big ERN has been busy implementing safe withdrawal rates over at Early Retirement Now. His case studies are always thorough and can offer a few nuggets that may apply to your own situation. Ten Lessons From Ten Safe Withdrawal Rate Case Studies. The studies:

Let’s hop over to another of my favorite series, the millionaire interviews from ESI Money. I got mine in early (see Millionaire Interview #5). We’re now up to 35 “millionaires next door“:

The last entry in both of the above series comes from Mr. Shirts, or as I like to call him, “SIS” of Stop Ironing Shirts. He expands on the “golden handcuffs” he’s wearing in Early Retirement Decisions: One More Year.

Our military heroes have a new investment option that may be particularly attractive if one more year is too many and a 20-year commitment seems daunting. From The Military Guide, Should I Opt in to the Military’s Blended Retirement System?

Let’s close with a couple more looks at a hot topic: Tax Reform for Physicians.

I’m not big on New Year’s Resolutions. I mean, I usually make one — two years ago I decided I would finally start a website — but in general, I don’t think they last. Intentions are good, but follow-through usually isn’t. How many of you have broken yours already?

Other years, I’ve said the usual. Eat better, work out more, drink a little less. But I generally don’t set SMART goals or hold myself accountable.

I’m trying to do things a little differently this year. I didn’t resolve to do anything differently at the beginning of the year, but after reading J.D. Roth’s goals for the year and seeing Mr. 1500’s progress, and sitting down with both of them a week into 2018, I was inspired to start tracking some goals of my own.

I won’t share my best guesstimates from the first eight days of the year (suffice to say it would make Rod Farva look good by comparison), and I won’t promise to share my numbers again, but here’s what I’ve got since then: 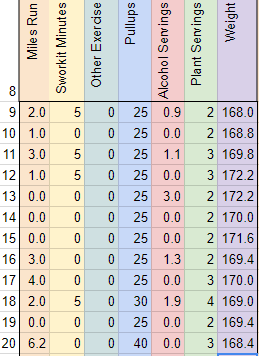 My goals are somewhat poorly defined, but I’d like to do most of the following:

What are you working on in 2018? How will you hold yourself accountable?

Have a wonderful wintery week!