I don’t feel burned out, but I can’t say I’ve never felt any of the primary symptoms. I talk about that and more in an interview with Molly Holbert. Burnout: Physician on FIRE’s Perspective.

Having worked nothing but locums for the first two years of my career, and having returned to it several times since, the folks at Physician Sense had some questions for me. The result is the following post: The Locums Life: Work Wherever You Want, Whenever You Want.

Locums is one way to make good money without a permanent job. What if you’re a physician who’d like to make money without a clinical job? From Dr. Heidi Moawad at Non Clinical Doctors, There are Jobs for Physicians Without Residency and Board Certification.

Dr. Moawad’s ideas would keep you involved with healthcare in some way, but there’s nothing that says you can’t just leave it all behind and brew beer. After all, with that brewer’s yeast beer is a living thing. From Indie Docs, What a Neurosurgeon Can Learn from a Beer Brewer: The Dangers of Playing it Safe.

If choosing medicine was your way of playing it safe, you may have made the wrong choice. Or so says Dr. David Beran in this truthful piece at KevinMD. It’s Better to Not Go Into Medicine Than Try to Get Out of It.

Perhaps you’re deep into your career, whatever that career may be, and nearly financially independent. Can FI Save You From Burnout? Or Make it Worse? A good question to contemplate with Kpeds from Pediatrician Finds FI.

How does a pediatrician, or anyone for that matter, find FI? First, you must keep track of your money. Who better than an economist married to a physician to aid you in your quest. From the EconDad comes a fantastic tool: Tracking Life Finances In A Single Spreadsheet.

Not the spreadsheet type? Fear not. Dr. Breathe Easy has an extensive list designed to help you get your finances in order. The Financial Pyramid – The Ultimate Guide To Put Your Financial Life In Order.

Two weeks ago, the headlines and forum questions centered around what to do with your investments in the midst of a market correction. And now, all is calm. Those were beginner questions (and headlines). From Personal Finance for Beginners, Why It’s Better to Be Invested Than Invested at the Right Times.

Is it better to be invested intelligently than simply invested. Are you capturing that alpha? Smart beta??? Get that gamma! Or not. A heady piece from Institutional Investor earns the final spot this weekend. The Wall Street Math Hustle.

I got an e-mail the other day. Maybe you did, too. It told me that Realty Shares would no longer be taking on new investors or offering new investments.

I also learned that most of their staff would be laid off and they would keep enough people around to help see the current investments through, but that the platform as we know it is presumably kaput.

Realty Shares is one of a hundred or so crowdfunding real estate crowdfunding platforms that acts a go-between matching accredited investors with private real estate investments. They were also one of the first and seemingly one of the biggest. At least, they were one with a strong venture capital backing (to the tune of $60 Million) and a strong online presence.

I made one deal with them — a $2,000 debt deal that paid a bit of interest and quickly went full-circle, paying back my principal in full.

While the news is disconcerting, it’s important to recognize that the likely demise of the platform does not mean the investors are S.O.L. The company is the middle man, not the sponsor.

Meanwhile, other platforms are thriving, real estate investing is a centuries-old concept, and the sky is not falling. Nevertheless, there’s a reason you must be an accredited investor, a.k.a. someone who can afford to lose a bunch of money, to invest in these debt and equity deals in the first place. The returns are far from guaranteed.

Some of you may have heard that one of the most popular and earliest real estate crowdfunding platforms, RealtyShares, has stopped taking on new investors. They sent out an email this week announcing the change, and letting everyone know that they were not able to secure additional funding and so would be scaling back their operations to manage current investments and deals.

What does that mean for current investors? Well, hopefully not too much. Deals that investors entered through the platform were made with Sponsors and those deals should continue to operate as before. RealtyShares will continue to manage them, making sure investors are getting paid in a timely manner. They are incentivized financially to see these deals through.

What does that mean for future investors? It simply means they’re going to have to look elsewhere to be introduced to new investing opportunities.

What happened? Well, none of the following is fact, but assumed information received from people “in the industry.” RealtyShares was one of the earliest and most successful crowdfunding platforms. As such, they were able to raise a lot of money from investors and institutions and they were driven to grow quickly. As a result they built up a large staff, invested heavily in technology and marketing, and built a reputation as a powerful and respected platform.

Problem was that revenue was not growing at a trajectory to support heavy spending and they continually needed to raise funds to stay alive. If you look at the growth curve of an Amazon, or Uber, or many large Venture Capital-backed company, you’ll see running losses in the early years with sustained operations only through continue huge investment rounds.

Unfortunately, RealtyShares couldn’t make that happen, saw themselves running out of cash, and had to do a huge scale-back. Perhaps they were a victim of their own success when they were able to raise so much money, so fast.

What will I do? Well, I still have investments operating through RealtyShares and expect them to play out as projected when I made the deal. I will hope that RealtyShares is able to keep the lights on and continue to oversee the various projects myself and others are invested in.

I think this whole situation is a reflection on the newness of the industry and how there will be some growing pains as companies figure out how to value their own companies and operate in an efficient manner. In my opinion, this is more about tech and startups and less about the basic fundamentals of real estate investing.

So, I’ll continue to invest in syndications and funds through reputable operators, some of which will be through my own contacts and experience, and others that I will no doubt find through other crowdfunding sites. I will look for platforms which aren’t heavily backed through tons of venture capital money which will more easily navigate some rougher financial waters should they encounter that.

I’ll update you as I learn more. Feel free to reach out if you have any questions or join the discussion on Passive Income Docs.

The Benefit of Diversity

I’ve invested with five different real estate crowdfunding platforms. I’ve invested a nearly identical amount of money into startup breweries. Between the two, the amount invested represents about 2% of our retirement assets.

I may increase my investments in both classes in the relatively near future, but until it rises above 5% or 10% of our assets, I consider it play money. In other words, it’s money that I can afford to lose. There’s a chance these will outperform traditional investments, but I also recognize the possibility of losing the money entirely. More risk, more potential reward.

In terms of blog revenue, I have earned a bit of money from referring a handful of you to Realty Shares. Again, it represents 1% to 2% of the site revenue this year, similar to the percentage of our nest egg. While it’s a small piece, I sincerely wish that the handful of deals that readers may have invested in are followed through upon. I put my own money on the line before suggesting it as an option for others. I do not wish to lead anyone astray.

What Are You Up to This Weekend?

My weekend consists of a trip to Minneapolis to visit friends. There was a three-and-a-half hour football game, preceded by a frigid half-hour of tailgating, and the high was about 20 degrees.

It didn’t go at all as expected. The good guys won the game, beat the spread by 43, and I somehow ended up in the regents’ suite, snapping a selfie with the University president. It was an afternoon to remember! 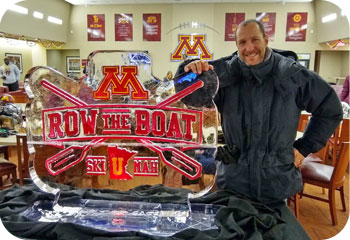 We’ve also got a date with The Book of Mormon today. Since we won’t be in town to attend religious services at our usual church, I figure this will be a decent alternative. I won’t be disappointed, will I? 😉

Have a glorious week!