Dr. Curious was kind enough to submit today’s guest post on a topic that is near and dear to me and my readers.

The good doctor is a radiologist married to a pediatrician. They’ve got two young human children and another of the canine variety. He started a blog of his own several months ago to explore his curiosities on life, money, and more in a two-physician household. If you enjoy this post, be sure to check out more thoughtful and curious posts at his site My Curiosity Lab.

Dr. Curious, tell us more about this ultimate hedge against future uncertainty.

Let me tell you about my Uncle Jack

For over 40 years, he worked as a research assistant in a lab at the local university, mostly in X-ray crystallography —a  field which made possible the discovery of the double-helix structure of DNA. He was an intelligent man who enjoyed life’s simple pleasures; camping and trainspotting were among his most cherished hobbies. He planned to do them much more, and travel the world with his wife, during retirement.

He was in otherwise great shape when, while still working at age 63, he was diagnosed with Alzheimer’s disease. Four years later—following a slow, steady decline in physical and mental health—he was gone.

The future is uncertain

All of us will encounter a tragedy like Uncle Jack at some point in our lives—most of us more than once. As I write this, in fact, a close family member of mine is dealing with a possible cancer diagnosis. These types of events should not surprise us, yet so often they do. Thoughts about death, illness, and injury are not pleasant, and they tend to reside in the furthest corners of our minds until we are forced to confront them. 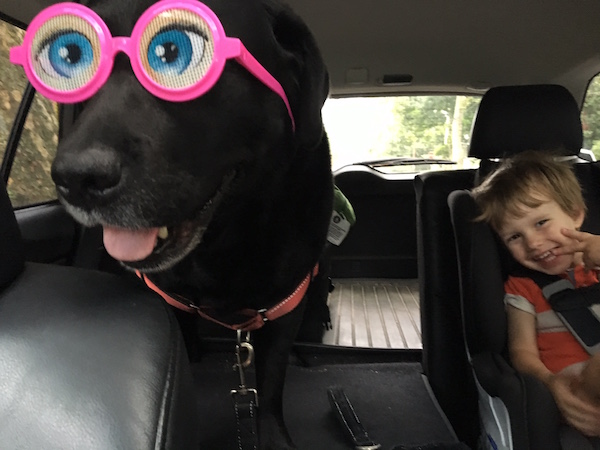 Life is not all bad. This dog with sunglasses is good, right?

By definition, our future is unknown. Even if you believe that free will is an illusion, and that our future choices have already been determined, we still don’t know what those choices will be.

How do we deal with this uncertainty? Before answering this question, let’s explore some different types of future uncertainty.

The fact that our collective financial future is uncertain should surprise exactly none of you. Oh, we can plan and project to our heart’s content but, as 2001 and 2008 have shown us, the global economy may have something else in mind for our retirement accounts. We can take advantage of temporary dips in the market—tax-loss harvesting and rebalancing, for example—but no one really enjoys tax-loss harvesting enough to hope for a financial crisis, do they?

A costly lawsuit, a desperate family member, an unexpected hospital bill—there seems no end to the ways we and our Benjamins might part. That’s what emergency funds are for, right? Although the financially savvy may be prepared to absorb unexpected expenses, they nonetheless present road bumps along the path toward a stable financial future.

A few weeks ago, I was chatting with my psychiatrist neighbor about his long-awaited move to California for semi-retirement. The very next day, I learned he had a stroke the evening prior and would be convalescing for months at a local hospital, his move on the back burner for the indefinite future.

Illness and injury is not uncommon, especially as we age, and it can cause havoc to our future life plans.

As a wise man once said, problems are inevitable and temporary. Unfortunately, some problems are temporary because they end in death. In our day-to-day lives, most of us take the advice of Blue Oyster Cult and don’t fear (or really think about) the Reaper.

Ever wonder how much longer you have to live? The Social Security Administration has, and here is a selection from their actuarial life tables for someone around my age (38).

Looking at the annual death probability column, I have ~0.2% chance of dying this year; two out of every thousand 38-year-olds will meet their makers. By no means high, but not as low as I would like. Let’s scroll a little further down the table, closer to what will be my full retirement age.

Lo, the Reaper has drawn closer. Nearly 2% of 67-year-olds can expect to die within the year.

According to the table, a 119-year-old has an 88% chance of kicking the bucket in a year; with only one American ever reaching that age, I’m calling BS on the data for that row.

A rogue asteroid, rogue virus, or rogue nuclear weapon could end life as we know it. Should we throw caution to the wind and party like it’s 1999?

Who knows? According to The Doomsday Clock—a metaphor to how close humanity is to global destruction—we are two and a half minutes until “midnight,” i.e. the end of the world. So never say never, and hope those are long minutes.

How do we hedge against an uncertain future?

Hedge /hej/ (verb): protect oneself against loss on by making balancing or compensating transactions.

In 1949, Alfred Winslow Jones launched the world’s first hedge fund when he acted to compensate for the risk of his long-term stock holdings by short selling other stocks, i.e., hedging his bets. If the stock market crashed, he would lose some money, but not all of it. His hedge cost him money in the short-term but protected him from monetary loss.

We can also hedge against uncertainty about the future with a “purchase” of sorts: buying more time.

Our time on this earth is constantly decreasing, and we don’t know when it will run out; we can only hope that we have a good deal of it left. The only way to absolutely guarantee an experience is to do it now, not later. Later may never come.

I would argue that the best way to mitigate against future uncertainty is early retirement. You start doing exactly what you want, when and how you want to do it. A health crisis or asteroid may derail your plans at some point, but until that time you will have lived your life exactly as you pleased.

What about financial uncertainty?

Early retirement can solve many problems, but admittedly it may not be an ideal hedge against financial uncertainty. The ability to continue to work and earn money can be advantageous when faced with financial adversity. Does this mean our plans for early retirement are ruined?

If one achieves financial independence — i.e. possesses sufficient wealth to survive without needing to earn income — that sizable nest egg or sweet pension can help to buffer market instability or unexpected costs. Of course, nothing can completely eliminate the possibility of financial disaster, but this is a fact of life whether one is financially independent or not.

The sky is not falling

If this post seems like fearmongering, or I come across as the world’s biggest worrywart, I apologize: that was not my aim nor my personality. I’m actually quite optimistic about my own life and the world in general.

I accept that the future is uncertain. While attaining financial independence and early retirement will not guarantee success and happiness in that future, it will guarantee more time to pursue those goals. Yes, FIRE is our ultimate hedge against an uncertain future.

PoF: Thank you for your article, Dr. Curious. I’ve often had similar thoughts, but have never put them in writing so eloquently. The future is unknowable, and I remain optimistic that mine will consist of a lengthy, healthy, fulfilled life. But it might not be.

If I don’t take advantage of the opportunity I’ve got to start living a life less ordinary, the possibility could be taken away by an unfortunate twist of fate. Why not take a shot at an early retirement? After all, we could always return to a more ordinary life.

26 thoughts on “The Ultimate Hedge Against Future Uncertainty”