I’m excited to bring you one of the most popular posts The White Coat Investor has ever written. The original post, Backdoor Roth IRA Tutorial,  has over 1,600 comments. If you’ve got questions, I’m fairly certain you’ll find the answer there.

I’m a big fan of doing this, and as of 2019, I’ve made seven pairs of backdoor Roth contributions for my wife and me.

I’ve captured screenshots at every step when I’ve made the contributions, and that post, Vanguard Backdoor Roth 2019: a Step by Step Guide, just happens to be one of my most popular and commented on posts, as well.

I’m still getting frequent questions on how to do a Backdoor Roth IRA.  So I thought I’d put together a basic, step by step, tutorial people can refer to when they do this.  Most physicians should be using a personal and spousal Backdoor Roth IRA.

Not only does this provide an additional $5,500 each ($6,500 each if you and your spouse are over 50) of tax-protected and (in most states) asset protected space, but it allows for more tax diversification in retirement. That allows you to determine your own tax rate as a retiree by deciding how much to take from tax-deferred accounts and how much from Roth accounts.

There are three key steps here.  Don’t miss any of them.

1. Get rid of any SEP-IRA, SIMPLE IRA, traditional IRA, or rollover IRA money.  The total sum of these accounts on December 31st of the year in which you do Step 3 must be zero to avoid a “pro-rata” calculation that can eliminate most of the benefit of a Backdoor Roth IRA.  You can get rid of these accounts in 3 ways:

2. Make a $5,500 ($6,500 if over 50) non-deductible traditional IRA contribution for yourself, and one for your spouse.  You can use the same traditional IRA accounts every year, they just spend most of the time with $0 in it.  Most fund companies, including Vanguard, don’t close the account just because there is nothing in it.  I do this every January 2nd.  I just place it into the Prime Money Market Fund to keep the math simple.  Since it yields something like 0.04% and doesn’t go down in value, the sum when you convert will be exactly the same as when you contribute.  No gains, no losses.

If you don’t already have a Roth IRA there, you’ll need to open one.  This can be done in a minute or two online at Vanguard and is essentially the same process as opening the traditional IRA.  It is very straightforward.

When you transfer the money, the website will throw up a scary banner saying something like “THIS IS A TAXABLE EVENT.”  That’s true.  It is taxable.  It is just that the tax bill is zero for it since you’ve already paid taxes on the $5500 and couldn’t claim it as a deduction because you make too much money.  You can now invest the money as per your investing plan.

Some people are concerned that the IRS will have a problem with the Backdoor Roth due to an IRS rule called The Step Transaction Doctrine.  This rule basically says that if the sum of a bunch of legal steps is illegal, then you can’t do it.  Since a high earner can’t legally make a direct Roth IRA contribution, then some have wondered if the IRS will really allow them to do it “through the backdoor.”

Ed Slott, Mike Piper, Harry Sit, and Forbes have recommended waiting a short period of time (anywhere from a day to six months) before doing the conversion so you can prove that wasn’t really your intent.  Michael Kitces suggests converting last year’s non-deductible contribution this year, then making a new non-deductible contribution for this year to “introduce economic uncertainty” as to whether you’re going to convert or not.

Personally, I convert the next day.  That gets my investment money working as soon as possible and simplifies the record keeping.  Vanguard won’t let you do it the same day, so I have to wait one day anyway.  I don’t spend much time worrying about the Step Transaction Doctrine for several reasons.  First, I haven’t heard of ANYONE getting a hard time from the IRS about this.  There are tens of thousands, perhaps hundreds of thousands, perhaps even millions doing this each year.  It is widely publicized.

You would think if the IRS really cared about enforcing it, that they would at least make an announcement about it, which they haven’t.  Nor have I heard of a single person who had this looked at in an audit.  Chances are ridiculously low that I’m going to be the first.  If they start auditing people over this issue, then people like me will start waiting a few months.  The IRS knows that, and in the end, the result will be the same, so what’s the point of wasting time and money on the issue.

Second, the IRS has no idea how long I waited to convert.  The date of conversion isn’t supplied to them on my tax return or on the paperwork Vanguard sends them.  I suppose they could ask for it in an audit, but only in an audit in which they decided to audit this particular item.  That’s awfully low risk.  T

hird, this idea of “economic uncertainty” about whether I’m actually going to convert or not is stupid, because non-deductible traditional IRAs are stupid. (Gains become taxable at marginal rates rather than the lower qualified dividend/long-term capital gains rates) It takes a very long time period and/or very tax-inefficient investing habits to make a non-deductible traditional IRA superior to a plain old taxable account.  Any reasonably intelligent auditor isn’t going to buy the idea that maybe I wasn’t really going to convert to a Roth, especially given the dozens of times I have referred to it on the internet.

[PoF edit: Congress has put its stamp of approval on the Backdoor Roth in a conference committee report, describing it as allowed by current law (see article at Forbes). Like Dr. Dahle, I’ve been making my conversion the day after the contribution, and it appears to be safe to continue doing so.]

The second part of The Backdoor Roth IRA is done 15 months later when you (or your accountant) fill out your IRS form 8606 on your taxes.  Remember that you need one form for each spouse.  You need to double check this to make sure it is done right, even if you hire a pro.  Tom Martin with Larson Financial, mentioned to me that he had to help clients fix dozens of these that tax preparers had done improperly.

If you don’t do it right, you’ll pay taxes twice on your Backdoor Roth IRA.  [Update: Here is a generic copy of a 2013 8606, showing how it should be filled out in a typical year. Yours will look different if you did your conversion in a different year from your contribution, or if you had an additional Roth conversion this year.] 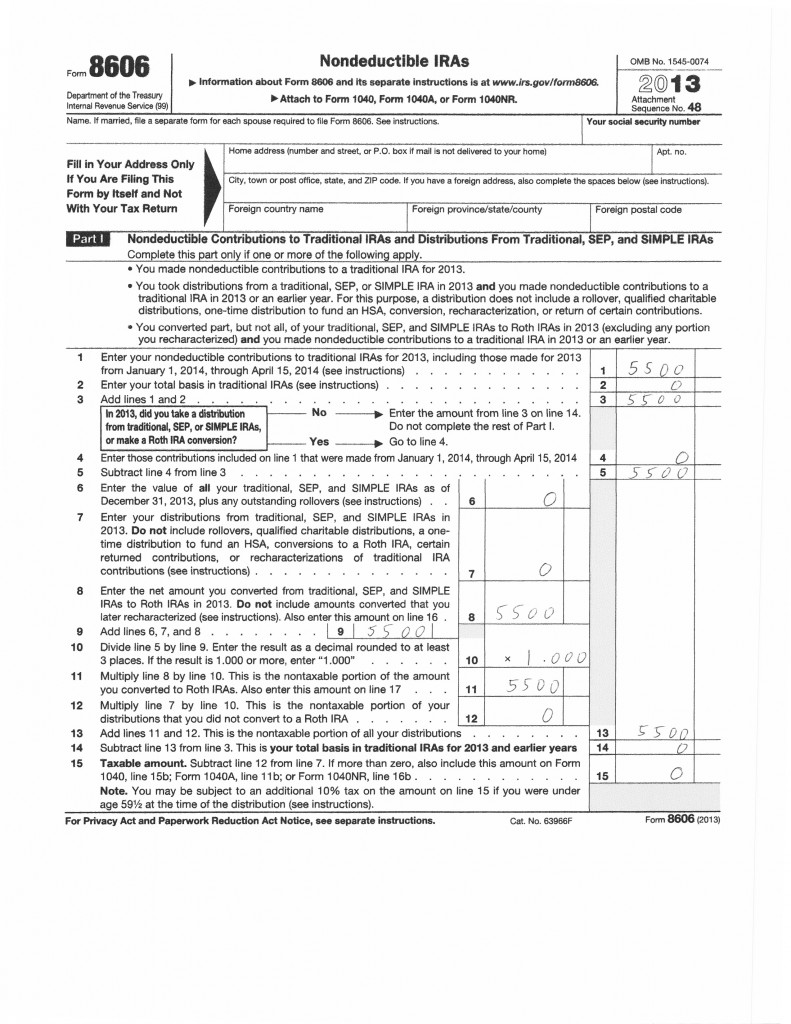 Page 1 shows a “distribution” from your non-deductible IRA.  Since the money was already taxed, the taxable amount on your distribution is zero.

Line 1 is your non-deductible contribution.

On Line 2, your basis is zero because you had no money in a traditional IRA on December 31 of last year (if you’ve been carrying a non-deductible IRA for years this may not be zero.)

Line 6 is zero in a typical year. Note that TurboTax may fill this out a little differently (may leave lines 6-12 blank) but you end up with the same thing. 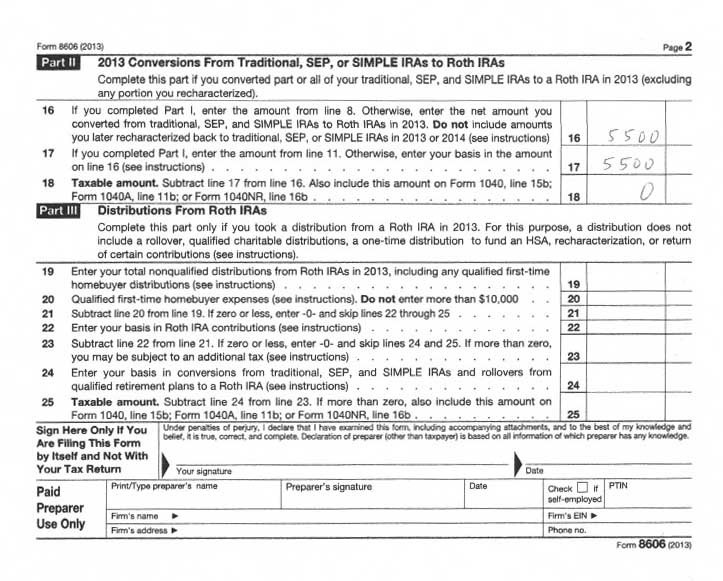 On page 2, you are showing the Roth conversion.  I’m not really sure why you have to do this twice (since you’re just transferring the amounts from lines 8 and 11 and then subtracting them, but that’s what the form calls for).  As you can see, a Roth conversion of a non-deductible traditional IRA contribution without any gains is a taxable event, it’s just that the tax bill is zero for it.

When double-checking your tax-preparer’s work, you want to concentrate on lines 2, 14, 15 and 18, and make sure they’re a very small amount, like zero, and not a very large amount, like $5500.

Harry Sit’s, The Finance Buff blog, has an excellent tutorial on this subject that can be found here. He also has a nice one showing how to do it using Turbotax, which, believe it or not, is trickier than doing it by hand. Also if you made your contributions in the first four months of the following year, be sure to check out this post: Late Contributions To The Backdoor Roth IRA for help filling out your 8606.

For more information, be sure to check out additional articles on the Backdoor Roth:

Any questions?  Are you doing Backdoor Roths?  Why or why not?