Skip to content
To paraphrase a common saying, the road to ruin is paved with good intentions.

Every parent wants “the best” for their children, but what exactly “the best” entails can be very different from one family to another.

Some gifts you give to your children are not only harmless, but helpful. Lego sets are fun and educational and only harmful when you step on them in bare feet. Other “gifts” that you might give your young or adult children can do more harm than good.

Dr. Jim Dahle reviews some of these potentially dangerous gifts in this Saturday Selection that originally appeared on The White Coat Investor. 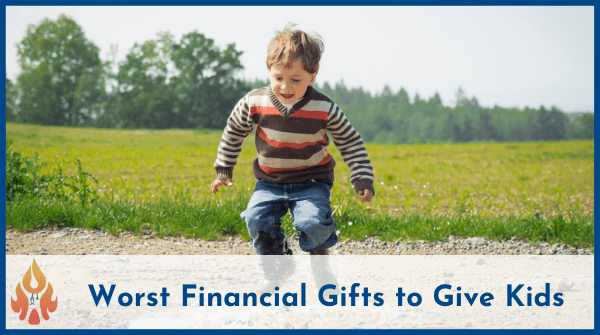 As a general rule, parents love their kids and would do anything for them. However, due to a lack of financial literacy, parents with fantastic intentions end up hurting their children. Here are some of the ways they do that.

Now, I’m sure there are people who think it is a bad idea to give your kid a car because it will spoil them. That’s not what I’m talking about. If you really want to spoil them, knock yourself out (actually we’ll get to this under #6).

What I am talking about is giving your kid a car that isn’t yet paid for. Yeah, some people do this. Can you believe it? They go down to the dealership, put down a $300 down payment, sign up for some payments, and then give you the car. Along with the responsibility to make the payments!

Uhhh . . . thanks, Mom. I guess it could be worse. They could have signed you up for a lease.

Another common situation is a parent who bought their kid a whole life insurance policy at birth. It would stand to reason that if you’re buying baby food and life insurance from the same company, one of the two probably isn’t a very good product.

Despite that, I keep running into people in their 20s and 30s who have just been given a whole life insurance policy and asked to take over the payments. Their parents have been making monthly payments on these for two or three decades, but the surrender value is only a four-figure amount at this point and the child is basically being asked to pay a two- or three-figure amount every month for the rest of their life.

It wasn’t a good policy to start with. It doesn’t address any financial need they actually have (because the face value is usually something like $20,000). And now they have no idea what to do with it, so they just start making the payments, too!

Incidentally, what they should do is surrender it; put the money toward their student loans; thank their parents for their kind gift; and never, ever run the numbers on how much that gift could have been had it been invested aggressively in a 529.

Here’s another one similar to the car. What a lot of people don’t realize about timeshares is that the purchase price is really kind of like a down payment and the annual fee is a lot like the ongoing payments. It isn’t unusual for the annual use fee to be 40% of the original purchase price, especially after a few years of inflation. The parents think they’re giving the kids an asset, but, in reality, they’re giving them a liability.

Now the kids feel like they have to vacation at that location (maybe even with the parents). They can’t afford the annual fees. They can’t sell the stupid thing for any reasonable price (and maybe can’t even give it away). And they feel guilty about the whole thing. Thanks, Dad!

Lots of parents offer to co-sign on a home. That’s very generous of them, although probably not that smart given that the kids can totally walk away from the house and the parents will be on the hook. I don’t think it’s a good idea.

If the kid needs a co-signer, that’s a sign that they’re not yet financially ready to be buying the home in the first place. So, the parent is really enabling the kid to pick up a liability and live beyond their means.

I appreciate that parents want to help their children pay for college. I think it’s great—unless they are borrowing to do it. I think if someone has to borrow to pay for an education, it should be the student. There are several reasons for this.

#6 Champagne Taste on a Beer Budget

An even bigger liability is a child who does not have any idea how to earn, save, budget, and spend wisely. Stanley and Danko documented the serious adverse effects of “economic outpatient care” in their classic book The Millionaire Next Door.

If your children leave your house with the idea that most Americans go to private school, drive Audis (or at least a Tesla 3), shop at Whole Foods, and vacation in Fiji, you have done them a massive disservice.

Maybe they will earn enough to maintain the lifestyle they have gotten used to, but I would expect a large percentage of the children of my readers will earn less than their parents did on an inflation-adjusted basis.

All of the above are terrible gifts to give your children. However, I saved the worst one for last. Most of the above problems are solvable, some pretty darn easily (sell the car, surrender the whole life policy, etc.). That’s not the case for this one.

I run into docs all the time who are flummoxed at how to take care of their parent who can’t control their spending, who has no assets, who just got scammed, who wants to move in with them, who requests money from them, or who basically is in such terrible financial shape that their child lies awake at night worrying about them.

One of the most wonderful gifts our parents have given us is their own financial security. They’re a blessing on our own financial lives instead of a drag. Many parents would do anything to help their children, but there is a reason you should prioritize retirement over saving for college.

Likewise, you should prioritize your own financial security at least equal to that of your children. Don’t put that burden on your children, even if it is typical in your culture. It is far easier to lift someone from above than to push them from below. Assist your children from a position of strength.

What do you think? Are there any other terrible financial gifts that parents pass along to their kids? Comment below!