A $150,000 salary — to most Americans, that would sound pretty good. To many people worldwide, that salary is unattainable.

But to a typical physician and the average reader of personal finance blogs geared toward the high-income professional, a $150,000 a year salary is nothing special — in fact, some would consider it to be “low income,” proving that everything is relative.

Dr. Jim Dahle decided to entertain a request to help those with a good-but-not-great income build wealth. It’s important to note that the $150,000 could be combined household income, and that makes it a figure that is much more attainable to dual-income households, even without any advanced degrees on the wall. 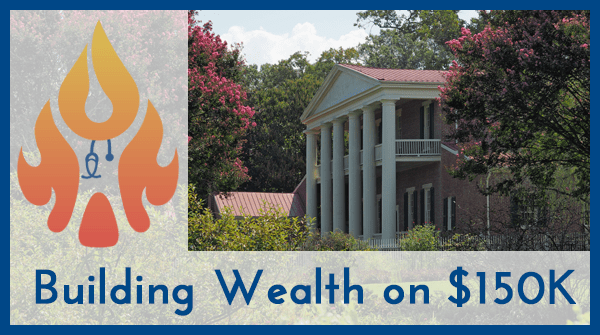 Q. I had an idea for an article you might consider writing in the future. Many of your readers are likely optometrists, nurse practitioners, pharmacists, etc. where the salary might be about $80-140K. With a stay at home spouse or a spouse with an average job they might be earning $150-175K at maximum, all cylinders firing. Plus the debt load is really not that much different than MDs other than the compounding residency period is shorter or absent.

A. I write for people with a wide variety of incomes. Some have a seven-figure income. Others a low six-figure income. There are a few readers who make even less and like to heckle me for not writing anything specifically for them.

I generally refer those folks to the internet where surely there is a financial blogger writing with them in mind. My target audience is high-income professionals including folks like ODs, NPs, and pharmacists. I’d love to read an article with tips, goals, strategies, and expectations, for the doctor that doesn’t start out with — or will likely never reach — a $200K salary. Or when both spouses already work but still don’t pull in that kind of money, yet have child care, student loans, mortgage, etc. to pay for.

I’ve written similar posts in the past for folks with lower incomes including these:

Most of the stuff written in those posts is going to apply to this situation. But let’s see if we can come up with something new and interesting to write and read today.

Even on a Lower Income, You Don’t Get a Pass on Math

The first point worth making here is simply that you don’t get a pass on math. Whatever your income is and whatever your debt is, that’s what you have to work with. There’s no magic answer here. Nobody cares that you’ve dedicated your life to the healing of the sick and injured. You’ve got to make the numbers work.

Just like it doesn’t make sense for a physician to borrow $800K for medical school, it doesn’t make sense for a nurse practitioner or an optometrist to borrow $400K. If you’ve done that, you’re up a nasty creek without a paddle and are going to need some extreme solutions like Public Service Loan Forgiveness, perhaps even one of the IDR forgiveness programs, and maybe living like a student for a very long time.

I’m sorry to be the bearer of this news, but the truth is you made this decision when you decided to borrow that much to pay for a degree that pays that little. The good news is all three of the degrees mentioned above probably have a better income-to-debt ratio than veterinarians or attorneys!

With a lower income or a lower income-to-debt ratio, your road is simply going to be longer and harder. Instead of becoming financially independent in 20 years, it may take 25. But the principles are all the same.

Don’t Overestimate the Difficulty of Doubling Your Income

Change jobs, ask for a raise, work overtime, start a side hustle, go into business for yourself, get a second job, send a spouse to work, find an investment you can add value to (websites, real estate etc.), marry someone with a great job or whatever. Lots of options.

My PA was convinced it was impossible for her family to double its income. I disagree. Lots of people say it can’t be done. Those of us who have done it (multiple times for some of us) just smile and nod.

Yes, there may be sacrifice involved, but nobody said it was going to be easy.Here’s another issue people struggle with. I had this discussion with one of my PAs the other day. In my experience, people routinely overestimate the difficulty of doubling their income. The lower your income, the easier it is to double it.

If you lose a $400K job, it can be pretty tricky to find another job that pays as much. But if you lose a $30K job? You can go deliver pizzas and make that. If you’re struggling due to a relatively low income, you probably spend too much money like most of us, but you also may simply need to boost income.

Here’s the other thing. Yes, PAs and NPs get paid less than docs. But they also start getting paychecks a lot sooner. PA school is two years. Med school is four. That’s two more years of not getting paid.

But wait, there’s more! A physician makes something similar to minimum wage for another 3-7 years. So that’s a delay in earnings of at least 5 years. The typical physician or dentist also has twice as much debt. Yes, I know SOME non-physicians rack up that much debt, but on average, they have less.

Let’s look at the classic example that shows up in lots of personal finance books. Let’s imagine you invest $10K a year for 10 years at 10%, then let it ride for another 20 years. Then, let’s consider someone who waits 10 years to start investing and invests $10K a year for the last 20 years.

Despite contributing twice as much, the late contributor ends up with half as much money. An early start matters. In addition, a lower earner can typically shelter more of their savings in tax-protected retirement accounts.

Now, one thing that IS unique about child care occurs with a two-earner family. You have to really evaluate what that lower earner is being paid AFTER paying for child care, taxes, maybe tithing, work-related expenses, and the additional money you can save by having someone economizing at home. Lots of people aren’t interested in working when they realize they’re doing it for $2 an hour. Great, be a stay at home parent. Child care issue solved.

There are other ways to solve the child care issue too. Move closer to family. Find a neighbor. Move your mother-in-law to your place. Don’t have kids. Lots of options. None of them easy, but paying off your debt, doubling your income, and getting rich aren’t easy either.

Another dilemma faced by these lower earning professionals is they’re almost always employees. An employee, by definition, is never paid what they’re worth.

If I’m an employer and hiring you increases my income by $100K, there’s no sense in paying you $100K. There would be nothing left for profit and no sense in me going to all that effort. I have to pay you less than you can generate, so I pay you $80K and keep the $20K profit. It must be so, at least in the long-run, if the business is to survive.

If you want that other $20K, you need to own stuff. There are PAs and NPs who own clinics. There are ODs who own their own office. There are pharmacists who own their pharmacy. Sometimes you own a business that has nothing to do with your main profession such as a website or real estate.

But, as a general rule, those with high incomes and high net worths own stuff. Try to own businesses when possible. When the business does well, you get to keep all the profit.

This may seem obvious, but if you’re a PA making $100K, you can’t live like a physician making $200K. A pre-partner physician can’t live like the partners. Anyone with student loans can’t live like someone that doesn’t have them. Anyone who wants to actually become financially independent can’t spend as much as someone who isn’t saving for retirement. You don’t get a pass on math.

What do you think? What financial tips do you have for the PAs, NPs, ODs, and pharmacists out there? How did you build wealth despite a lower income?