Before we get to today’s guest post, I want to highlight the impressive new course put together by my friend and business partner, Dr. Jim Dahle. It’s a thorough course designed to take you from an investing novice to a confident do-it-yourself investor with a sound written investing plan.

I’ve personally taken portions of the course and yes, I’ve learned a few things already. But this course isn’t designed for me. The target market is the high-income professional who relies on someone else to manage his or her money without knowing whether or not it’s really being managed appropriately.

By the end of the course, at a minimum, you should have a good understanding of how your money is being managed and whether or not you’re getting a “fair shake.” More importantly, you’ll be armed with the ability to “Fire Your Financial Advisor.”

It’s not inexpensive at $499, but considering it’s not unusual to see annual fees of $20,000 or more when your money is managed by a fiduciary fee-only advisor (like this couple did), it could be considered a relative steal if it allows you to finally take charge of your own financial future.

If you decide it’s worthwhile to spend half a thousand dollars to potentially save tens or hundreds of thousands, I encourage you to do so via the links on this site, as every sale supports the operation of my website and its charitable mission. If you have any regrets in the first week, you can return the course for a full refund, no questions asked.

Unfortunately, the promotional $399 price period is over. You won’t find this course cheaper anywhere else. If you’re at all curious, take a peek at Fire Your Financial Advisor from The White Coat Investor. 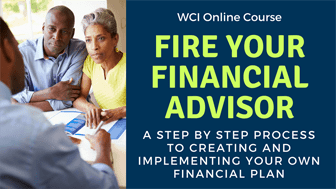 Today’s guest post comes from JW of The Green Swan, a father, husband, and healthcare banker who has reached financial independence in his early thirties. To learn much more about J-Dub and his story, please see his Christopher Guest Post from my question and answer series.

Some time ago, he turned me on to the idea of purchasing a catastrophic plan and paying the penalty for carrying a non-ACA-compliant plan. For certain individuals, that was actually the most cost-effective healthcare coverage option. With the penalty going away in 2019, the option could be more attractive to the early retiree.

I requested a post that expanded on this idea, and he graciously accepted. Thank you, kind sir.

You may not have heard the news recently, but the United States just passed into law a complete overhaul to the tax code. But what you may not have heard was tucked inside that bill was a repeal of the Obamacare individual mandate. Oh, did you miss that point when reading the 500+ page bill to simplify our tax code?

For folks living in the world of financial independence or the pursuit thereof (why else are you reading the Physician on FIRE…), the repeal of the individual mandate has the potential to change the way you buy health insurance in early retirement for the foreseeable future.

So how about a little Q&A:

The individual mandate was the part of Obamacare that required everyone to get health insurance or pay a penalty. You could have insurance from Medicare, Medicaid, from your employer, or bought individually on the state or federal insurance exchanges, but if you don’t have qualified insurance a penalty is levied when you file your taxes.

The purpose behind the mandate was to force the young and healthy into the exchanges so they are pooled with the older, sicker, and more costly patients to basically subsidize their insurance premiums. The government subsidies for insurance offered on the exchange represented the carrot. The penalty, if you don’t buy, was the stick…

Why was the Individual Mandate Repeal Included in a Tax Law?

The individual mandate has always been a hotly contested subject ever since Obamacare passed. The Republicans challenged the legality of the mandate and took it all the way to the Supreme Court. Do you remember the decision that came down back in June 2012? Maybe that is a date that only sticks out in the mind of a healthcare banker…

Ahh, the circle of life…

What’s that Mean for the Obamacare Exchanges?

To be clear, the mandate is going away beginning in 2019. There are no changes for 2018. The 2018 Obamacare insurance marketplace window has already closed (if you buy through the exchanges hopefully you got your insurance already…), the rates are set, and penalties…or uh taxes…will still be levied if you don’t have insurance in 2018.

Beginning in 2019, there will be some wild changes. Early Congressional Budget Office (CBO) estimates are that health insurance premiums will rise an extra 10% and four million fewer people will buy insurance. Who will continue to buy? In all likelihood, the exchanges will represent a place for low income and sick people (e.g. chronic illnesses, etc.).

Low-income folks will still buy on the exchanges because they’ll continue to get the majority of the premiums subsidized. And the sick because they’ll have limited other options (they are getting the shaft in all of these changes…).

For early retirees living modestly on their massive fortunes (and reporting a low taxable income every year), you’ll likely still benefit from the government subsidies. But take advantage while you can, that could be the next thing Washington targets…

You certainly should care…optionality, my friend! As long as the subsidies are still flowing on the exchanges, that remains a great option. Even if rates go up 10% in 2019, the subsidies will also rise. Here you will find good, comprehensive health coverage at a low (subsidized) price.

Approximately 85% of folks who buy insurance through the Obamacare exchanges receive a subsidy, which is available for income levels up to 400% of the federal poverty level. In 2018 for a family of four with an income (modified adjusted gross income) below $98,400, you’ll receive subsidized healthcare. For a family of two, the income limit is $64,960 to qualify for subsidies.

If the subsidies eventually go away or if you are more of the “Fat FIRE” type (the high cost of living early retiree…) and don’t qualify for the subsidies, another option just got cheaper. With the repeal of the mandate, you can now buy what’s known as catastrophic health insurance (aka emergency health insurance or major medical insurance) without having to pay the mandate tax anymore.

What is Catastrophic Health Insurance?

Catastrophic health plans were curtailed significantly as part of Obamacare, available only to those under 30 or who have a “hardship exemption”. Clearly these plans were unreachable for early retirees. Catastrophic plans are a type of high-deductible insurance offering bare-bones coverage for very low premiums on a state by state basis.

While it varies from plan to plan and state to state, catastrophic insurance typically covers the majority of healthcare costs including doctor visits, prescriptions, and procedures once the deductible is met.

Under Obamacare, these plans were non-compliant which meant they didn’t offer the “essential health benefits” and other qualifications and, therefore, you’d have to pay the mandate tax just like if you didn’t have insurance at all. However, if catastrophic plans fit your needs, some folks have been known to buy them for coverage, elect to pay the tax, and it still being cheaper overall than buying compliant plans on the exchanges.

Catastrophic plans are there for you when healthcare bills begin to pile up, but generally are insufficient for most individuals and families. Deductibles can be as high as $6,000 or more per person per year.

There are two key demographics that typically find value in these plans though, and those are:

Regarding the first demographic, this represents primarily folks living in the 19 states that didn’t expand Medicaid under Obamacare. There is now a gap between Medicaid eligibility and where the exchange subsidies kick in. There are nearly 2.5 million people who fall into this gap and generally elect to not buy any health insurance or opt for the cheap catastrophic plans.

In the second demographic, this would include financially independent early retirees. Now that the mandate tax has been repealed, these plans are effectively cheaper for them.

I’m sorry, Physician on FIRE, did you say something? Oh, you want a case study? Ok, well thanks for volunteering yourself…

Let’s take the good Doc for example. Here we have a generally healthy family including his wife and two boys. No chronic illnesses or pre-existing conditions; no intentions of expanding the family further and trying for a girl; his boys are past the age of when many childhood surgeries happen (ear tubes, tonsils, etc); and as a bonus they have a well-stocked Health Savings Account which can be used to cover the deductible in case of emergency.

A young, healthy family. Doc, do you consider yourself a “young invincible”? I consider myself one… 😊 And I may follow in your footsteps once I make the leap into retirement.

The bottom line…a non-subsidized comprehensive health insurance plan for a family of four could cost upwards of $15,000 or more in premiums per year whereas a catastrophic health plan could cost over 50% less. That saves thousands per year (…which could go toward paying the deductible in case of emergency)!

And don’t forget about short-term plans! Did you miss Trump’s executive order in October 2017? Short-term plans are now a more feasible option as well since Trump rolled back Obama-era limitations of plans being 90 days or less. Trump is reverting them back to the prior limitation of lasting up to a year with the ability to renew.

Plan characteristics can vary significantly state to state, but provide lower premium rates and with less comprehensive coverage than traditional health insurance. Similar to catastrophic plans, they are non-Obamacare compliant so they can exclude those with pre-existing conditions and base rates based specifically on your health background.

The change to short-term plans isn’t immediate. Now that the executive order is in place, the administration will begin crafting the new regulation and guidance to carry out the order. Be on the lookout for these plans as a good option in 2019 which can be purchased both on the exchanges and directly from insurers.

While the health insurance landscape in America can be so frustrating (not to mention costly…) as it continues to change yet again, we need to be aware of our options and the changes coming down the pike.

While we have a year before these changes become effective beginning in 2019, it’s best to start considering options now.

Thanks for taking a look!

[PoF: Thank you for the detailed rundown of the new options available next year without a   additional tax levied.

I plan to look at these, along with health sharing ministries, as potential options for our family starting in… you guessed it… 2019.]

What are your plans for healthcare coverage in retirement? With the pending elimination of the individual mandate, will you be considering a catastrophic or short-term plan?