Many years ago, I was a pretty big fan of running back Adrian Peterson. As a lifelong fan of the Minnesota Vikings, I was delighted to see the strong and speedy runner destroy opposing defenses. I vividly recall where I was watching the game (Primanti Brothers in Pittsburgh) when he set the single game rushing record with 296 yards against the Chargers.

I became less of a fan later on when I learned of some of his off-the-field escapades. The worst among several stories was the child abuse case in which he injured his 4-year old boy by hitting him with a “switch,” or tree branch. Apparently he didn’t learn from his mistakes.

Well past his prime, he now plays for the “Washington Football Team,” if they even play at all in 2020. I said goodbye and good riddance to #28 several years ago.

Apparently, the star athlete never learned from his money mistakes, either. I recall his lavish 30th birthday party that had him riding in on a rented camel. I also saw him on an Animal Planet show having a ridiculously expensive aquarium installed in his mansion.

How surprising that Mr. Peterson has a lower net worth than the dentist who came out of training with $1 Million in student loan debt? Not very.

Dr. James Turner originally spoke of the man’s money woes and the lessons we can learn from them on The Physician Philosopher, and his words follow below. 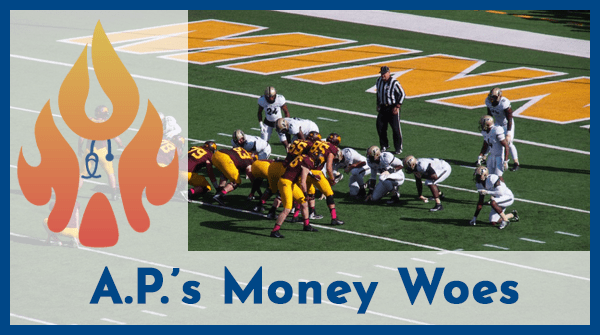 The news that “broke” is that AP is, well, broke. Despite being one of the most prolific running backs to ever play the game, Adrian Peterson’s money problems are impressive. The story outlines how they feel that AP landed in such a bad spot, and I think there is a lot that high-income earning medical professionals can learn from his bad financial situation.

Don’t for a second think that these same things can’t happen to you. In fact, I’d argue that many of the mistakes AP has made are common among doctors, too.

Here are some lessons you can take away from AP’s situation.

The article highlights the fact that Peterson trusted the wrong people and that this led him to make some terrible financial decisions. He has outstanding loans where he owes millions. In fact, it looks like he owes more than he will make this entire season despite earning >$5 million over 2 years.

At this point, I’m not sure if I have heard this story more often about professional athletes or doctors. The truth is that I cannot count the number of times a doctor has told me that they received bad financial information that led them to make a bad decision.

Often times, this advice comes from an insurance salesperson masquerading as a financial advisor. This leads to whole life insurance purchases and investments placed in loaded and actively managed mutual funds. What makes this even more heartbreaking is that many of the doctors that tell me these things are still swimming in student loan debt from medical school.

This is what happens when the medical education system fails to teach personal finance. When people aren’t taught this stuff, it shouldn’t surprise us when our future doctors are not properly prepared to deal with the financial industry. This leads to mistakes.

2) A High Income Will Not Save You

Peterson made close to $100 million during his NFL running back career.

While a high-income can allow you to make some financial mistakes. It doesn’t give you a pass on math. If you spend more than you make – which is common in our country – it will eventually catch up with you.

While we don’t earn $100 million during our careers, we do earn multiple millions. Yet, we see all the time that it doesn’t matter how much money doctors make. Many of us end up in dire financial straits, too. Remember that over 50% of doctors cannot retire at age 65 and maintain their current lifestyle.

Another key thing to take away from AP’s situation is what got him there. He borrowed money in order to pay off other debts. The problem with conducting life this way is that the debt will eventually have to be paid.

Around 10-20% of physicians have recurring credit card debt. Of course, 80% of physicians also graduate medical school with an average student loan burden around $200,000. Many doctors also finance car loans.

At some point this debt will come calling. When we inflate our lifestyles to the extent that we cannot make serious headway on our debt, we must realize that it will come for us eventually.

Instead of taking a passive route towards dealing with debt, we need to make a plan.

Look at all of your debt and choose whether you’ll pursue a debt snowball or debt avalanche method to paying it all off. Choose to pursue public service loan forgiveness (PSLF) or refinance your student loans. If you don’t know which to choose, consider getting a student loan consult from an expert.

In fact, I encourage you to write down very specific goals. How much will you pay each month? When will it be paid off? Write it down, and then go be the same dedicated and determined person that got you into medical school in the first place.

4) Get Your Financial Education

A strong financial education would have prevented many of Peterson’s mistakes. Fighting against behavioral finance is challenging. Even for those of us who read and write about it.

If you don’t read solid financial books and continue to educate yourself, you will be 100% on the advice of others. I’ll refer you to point 1 above to see why that can be problematic.

Instead, educate yourself enough to become financially literate. That way, you can fight fair with the financial industry. And you’ll also be able to build a financial plan that works for you.

5) Give From a Position of Strength

I am not sure if this applies to AP’s situation, but many athletes spend too much money out of generosity.

Making it to professional sports is not a solo journey. There are people who took you to practices and games, bought the equipment, and others who coached you. There are also friends who stuck by their sides through thick and thin. When they finally make it to the big show, there are a lot of people who want a slice of the pie.

These days, professional athletes commonly buy the house for mom and cars or Rolexes for their friends. All of this spending catches up quickly. Even when you earn millions of dollars. When careers are cut short or they get called on their debt, many athletes end up as broke as when they got there.

Now, don’t get me wrong. There is nothing wrong with giving to other people. That’s not my point. In fact, I encourage people to give to causes that they back while they build wealth.

My point is that you need to take care of yourself, too. Make sure that you have paved a path to early financial independence, and that you’ve dealt with your debt.

Then, once all of your debt is gone, it will free up even more cash flow so that you can benefit others. If you start out giving away 10% of your take home pay, maybe you can go up by 1 or 2% each year after you pay off your debt. Pretty quickly you’ll be helping others more than you can imagine. And you’ll be doing it without the same risk of falling into financial ruin.

Give to others along the way, but remember to take care of your financial needs first. Then, give from a position of strength.

Remember there is no amount of wealth that protects you from financial ruin if you don’t learn this stuff. Without a solid financial education, you are sure to make grave financial mistakes.

There is a better way, which is to get your financial education so that you can make a plan for your debt, know what good advice looks like, and achieve your financial goals.

Have you noticed that doctors make the same mistakes as professional athletes? Share your stories below, and what others can learn from them.