Did you know that a high income can become one’s own enemy? It can also lead to a hefty tax bill — have you ever had to pay taxes on a million dollars? 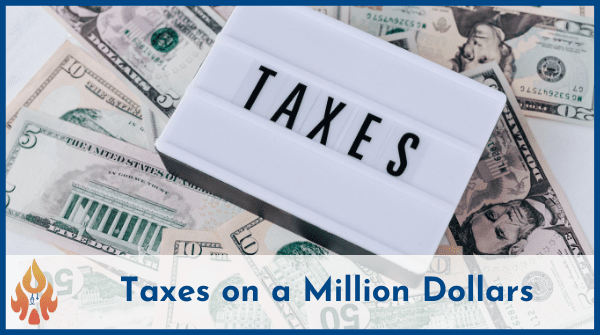 We’ll keep things consistent by looking at married couples with one income, filing jointly while contributing $39,000 a year to tax-deferred retirement plans. This could be any combination of 401(k), 403(b), and/or 457(b) contributions, as long as they have access to two of them.

They have no children and thus receive no child tax credit (which can be up to $3,000 per child). They live in a state with a mid-range total state & local income tax at a flat 5% of their federal taxable income per year. Again, the numbers below are calculated for income earned in 2021.

All calculations were made with assistance from TurboTax TaxCaster. Depending on your tax situation, you may be able to file for federal and state income taxes for free with TurboTax.

The tax calculation on $35,900 of taxable income gives them a federal income tax of $3,913, according to TaxCaster. 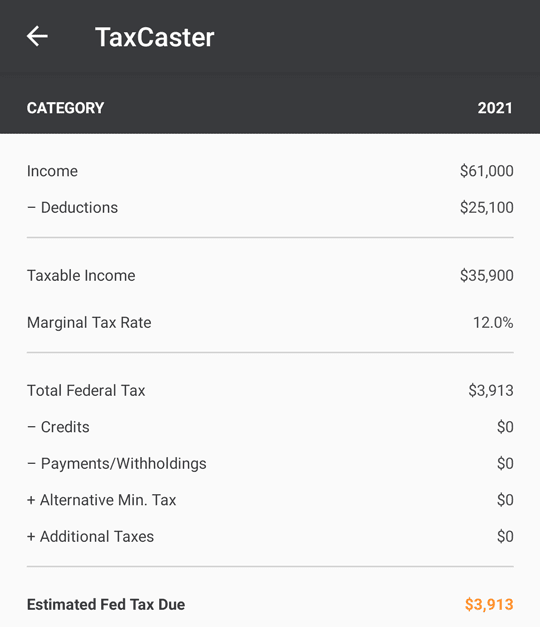 Note that about 2/3 of this consists of payments to Social Security, and they should get at least some of that back, eventually. Isn’t it remarkable that the federal income tax was negligible with $100,000 in household earnings?

Multiply their annual tax bill times 10 and they’ll pay about $134,000 in total taxes on a million dollars of earned income when spread out over a decade. They were able to keep over $860,000 of their earned income in that ten-year timeframe.

Multiplying the income from our first example by 2.5x, this couple is earning $250,000 per year. This could be a dual-income couple each earning in the low six-figures, a primary care physician with a stay-at-home spouse, or a part-time specialist like this guy.

For consistency’s sake, we’ll assume it’s a single-income household. The only place it matters much for purposes of today’s exercise is the FICA tax calculation, although in real life, a dual-income household could presumably defer more tax with more tax-advantaged retirement plan space.

Federal income tax, as calculated by TaxCaster, comes out to $32,658. 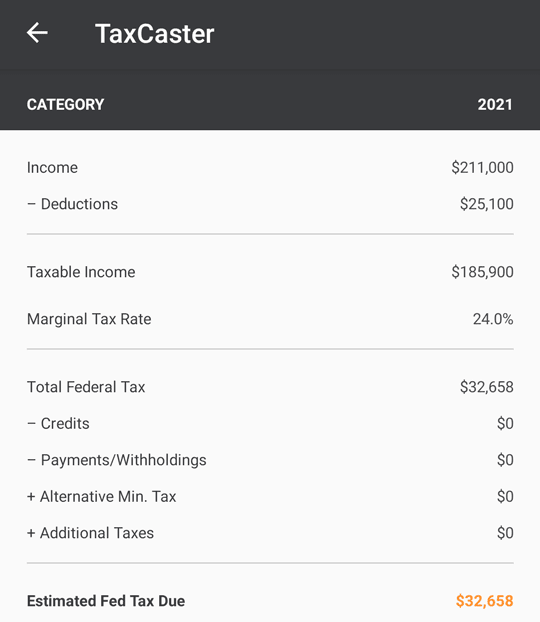 Earning a Million Dollars a Year

While not common in medicine, public records do show that a number of our states’ highest-paid employees are employed by our public universities. The football and basketball coaches usually top the list, but the neurosurgeons and cardiothoracic surgeons often populate a few of the top 10 positions. There’s also an ophthalmologist in Oregon earning $913,335 per year in retirement as his pension, for an outlandish example.

Yes, that’s insane to me, and no, I’ve never earned anywhere near a million dollars a year, but there are docs like this out there. I’ve featured a urologist earning seven figures and another physician earning upwards of $1.8 Million a year as a practice owner. You’ll find more examples of such high earners in our interview series.

In this example, the couple will earn a cool one million dollars in one year. To keep the FICA taxation consistent with the other examples, we’ll assume this was one income-earner, but it’s more likely to see this kind of total income from a dual-physician couple, probably in high-paying specialties and perhaps practicing some geoarbitrage.

After accounting for the same $64,100 in deductions for the tax-deferred retirement contributions and standard deduction, they owe income tax on 93.6% of their $1,000,000 income.

The TaxCaster calculation shows $282,806 owed in total federal income tax. Note that the “Additional Taxes” of $6,398 represent the additional Medicare Tax owed on income above $250,000. 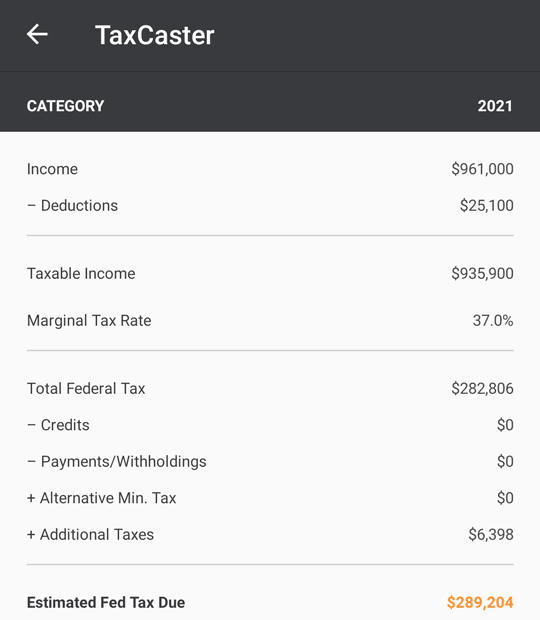 Is it Better to Earn More?

Let’s summarize what we learned about these fictional one-income couples earning one million dollars over various periods of time.

While higher earnings are taxed at a higher percentage, the fact remains that the more you earn per year, the more you have at the end of the year. The couple earning $1,000,000 a year would have over $6.5 Million in after-tax pay after 10 full years of earning a million bucks annually.

This simplified example ignores the Alternative Minimum Tax (AMT), which now affects far fewer people than it did prior to the Tax Cut and Jobs Act.

What’s perfectly clear in these examples is the progressive nature of our income tax structure and the diminishing returns of additional dollars earned in a given year.

Conversely, we also see the regressive system in place to fund Social Security. The couple earning $100,000 paid nearly as much for the Social Security portion of FICA as the million dollar earners. The Medicare Tax, on the other hand, is a progressive tax with two tiers.

For the same amount of work, I’d take a higher salary eleven times out of ten. However, when you realize that you’re maybe keeping a little more than half of any extra money earned once you’ve got the salary of a physician specialist, more work for more income becomes less appealing.

How I Have Applied These Principals to My Own Life

Personally, I took advantage of the progressive nature of taxation in my own life when I worked part-time over the final two years of my career. I calculated that the shifts I gave up were the shifts that paid 30% less after tax than the shifts I was keeping.

We also considered the role of our marginal tax rate when deciding whether or not my wife would work as a dietitian after our children were born. Knowing that a $40,000 salary would only add maybe $20,000 to $25,000 to our bottom line and factoring in the cost of childcare, the correct decision for our family was obvious.

Dual physician households will face similar calculations. When the work is stressful and long, and your kids spend twice as much time with their nanny than you, keeping half of a $200,000 salary may not seem so appealing, either. You can always run the numbers based on your individual situation using TaxCaster.

For the financial voyeurs out there, I revealed our 2019 1040 tax return line by line.

We didn’t have a million dollars of income in 2019, but our total income exceeded half a million while our taxable income was less than $250,000. See the full breakdown in our 2019 tax return reveal. If you want to predict your tax situation, I recommend this outstanding tax planning tool that I use to fine-tune my taxable income.

39 thoughts on “Taxes on a Million Dollars of Earned Income”