I hopped out of the shower and into my Fruit of the Looms. After a quick electric shave, powered by Duracell, I put on my favorite Original Penguin shirt from Munsingwear and a pair of jeans and strapped on my Tony Lama boots. I looked pretty sharp. Not as cute as my son in his Garanimals or as dashing as my wife and her Helzberg Diamond ring and white gold necklace from Ben Bridge Jeweler.

After perusing the Buffalo News and enjoying a hearty brunch prepared with our Pampered Chef cookware, I headed out for an important meeting, but not before grabbing a few See’s Candies bon bons — I have a bit of a sweet tooth — and admiring the accent wall in the dining room, freshly livened up with Benjamin Moore paints.

I left with enough time to grab a Dairy Queen Blizzard before hopping aboard the Net Jets plane I had reserved. I sometimes fly coach, but when you’re meeting with the Marmon Group, a $4.5 Billion holding company, you pack an Italian suit and take a private plane.

I Made All of That Up.

Truthfully, almost none of this is true. I do have an Original Penguin shirt and a penchant for Blizzards and See’s candy, and my boys have donned Garanimals, but I made the remaining details of this story up. Why?

I own all of these businesses.

The Rest of The Story

On the way to Chicago, I opened the Coca Cola, Cracker Barrel Cheese, Planters Peanuts, and Claussen Pickles I had picked up at Wal-Mart for an unconventional but satisfying lunch. I normally shop at Costco, but I ever since they switched from American Express to VISA, I don’t go there as much.

I was picked up in a Cadillac and I directed the chauffer to swing by a Wells Fargo branch so I could withdraw some cash for a brewery tour — I wasn’t sure they would take my Mastercard. We proceeded to grab some Burger King, conveniently located next to the Phillips 66 station, and made our way to the Loop.

Before the meeting, I pulled out my Apple iPhone (shipped by UPS, on Verizon service) and paid our Charter bill online. After hours of intense negotiation, or whatever it is that business people do at business meetings, I enjoyed a few tasty beverages before turning in early to ensure I could catch my American Airlines flight home the next day.

I could write paragraph after nonsensical paragraph like those above, but I think the point has been made. Owning shares of Berkshire Hathaway is a bit like owning a mutual fund. It is a basket of individual companies. For a complete list, see Wikipedia’s list of assets owned.

Berkshire Hathaway also keeps a list of links to subsidiary companies on its website (prepare to be awed by the 1990s coding technology!) but ignores corporations with minor holdings. 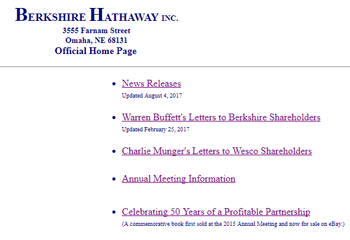 The Performance of Berkshire Hathaway

Berkshire Hathaway, which was a New England textile company when Buffett started buying shares in the early 1960s, had its heyday before the turn of the century. There’s a reason Omaha ranks among the U.S. cities with the most millionaires per capita. From 1965 to 2006, the stock returned an average of 21%, doubling roughly every 3.5 years based on the Rule of 72.

Since I made my purchase in August of 2016, the stock has performed reasonably well, beating the S&P 500 and performing similarly to an aggregate of US stocks. According to Personal Capital and consistent with the current value of my holdings, I’ve seen a 113% increase in my Berkshire holdings as of February, 2022.

Of course, past performance does not predict future results. And the men responsible for these returns are no spring chickens. Some investors or would-be investors are concerned that the value of the stock will drop when the stalwarts Charlie Munger and Warren Buffett pass away, but Buffett has gone on record to say he predicts the stock price will increase the day after the inevitable happens.

For some investors, this would be considered a turnoff. For a high-income professional, however, the lack of a dividend is something to celebrate!

However, for the high-income professional with a taxable investment account, dividends are an enemy to your total return.

Sure, there’s the aforementioned 15% tax on qualified dividends. In most states, you can add on state income tax of about 4% to 10% or more. Some cities impose an income tax on dividends, too.

If you enjoy the household income of many physicians, you’ll be subject to the 3.8% NIIT (ACA) tax. And it you’re in the top federal income tax bracket, tack on another 5%. It’s not uncommon to give up 25% to 35% or more of your qualified dividend payments to taxes.

In the case of ordinary dividends, the tax treatment is even worse — you’ll be taxed at your marginal tax rate, which for many of us can exceed 40% or even 50%.

Berkshire Hathaway has famously paid no dividend, meaning you will pay no taxes along the way simply for owning the stock in a taxable brokerage account. While there are tax managed funds, their tax efficiency pales in comparison to Berkshire Hathaway.

Eventually, if you have a gain in the stock, as I hope and expect to do, you may owe some capital gains taxes. But if you wait until retirement to cash out, you may very well find yourself in a lower tax bracket, possibly in the bracket in which you can avoid federal taxes on long term capital gains entirely.

Every spring, the wealthy, the wannabe wealthy, investment gurus, and money geek bloggers like me descend upon Omaha, Nebraska to partake in the spectacle sometimes referred to as “Woodstock for Capitalists.”

I have not yet made the trip — work, travel plans, and a pandemic have interfered — but I would like to attend the extravaganza soon. At ages 98 and 91, one never knows how many more opportunities we’ll have to see Charlie Munger and Warren Buffett speak and sip Cherry Coke in person.

In addition to seeing the legends in person, the meeting would also present an excellent opportunity to network with other investors, bloggers, and authors who make the trip from around the country and globe. And besides, I’ve never found another reason to visit Omaha. I’ve heard they’ve got a nice zoo.

Do you purchase individual stocks? Are you a Berkshire Hathaway owner? Any plans to attend Warren-palooza 2018 or have you attended in the past?