Why wouldn’t you want to spend three days in the middle of nowhere among 50 or so people you’ve never met? It sounds so… scary, doesn’t it?

I may not be the best person to do the marketing for this gathering of FIRE seekers, but I do plan to attend the upcoming Camp FI Midwest near the Twin Cities of Minneapolis and St. Paul from September 3 to 6, 2021. “Doc G” from DiverseFI and the Earn and Invest podcast will also be joining us, and safety precautions will be in place (masks, social distancing, etc…).

I have now attended Camp FI three times, once as an attendee, and two as a guest speaker. I got in on the very first Camp FI near Gainesville, Florida and attended Camp FI Midwest in Minnesota in 2018 and 2019.

I have found these mini-retreats to be inspiring, rewarding, and fun and I’d like to tell you more about them so you can decide if Camp FI might be a good fit for you.

According to organizer Stephen Baughier, Camp FI Midwest 2019 was the 12th rendition of a Camp FI weekend. As you might imagine, camps were put on hold in 2020, but with the vaccine now widely available, the camps have resumed.

The origins stem from Stephen, a Georgia native, wanting to create an event similar to Camp Mustache, an annual gathering of Mr. Money Mustache devotees in the Pacific Nothwest, for people in his geographical region.

Camp Mustache Southeast was the first iteration. There wasn’t enough interest from the Mustachian Camp to continue holding weekend retreats around the country, which is something that Stephen was interested in doing. 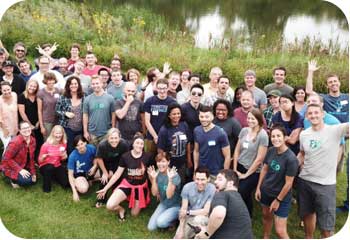 Thus, Camp FI was born. Dropping the Mustache name and replacing it with FI (financial independence) gave it a more inclusive feel. As an SUV-driving fatFIRE type, I felt I’d be a bit more welcome. I do ride bicycles, am selectively frugal, but I’m also selectively extravagant.

What Happens at Camp FI

Essentially, Camp FI is a three-day experience where a bunch of strangers gather to learn and talk about life and money with a focus on financial independence.

When I signed up for Camp FI Southeast, I had the benefit of knowing I would not be surrounded solely by strangers. As a FinCon17 attendee, I knew I’d have the chance to reconnect with Mr. & Mrs. 1500, “Coach” Chad Carson, Brad and Jonathan of ChooseFI, J.D. Roth, Doug Nordman, Miss Mazuma, and Scott Trench of Bigger Pockets, among others.

However, the majority of the attendees had never met another person at the camp unless they showed up with them.

Friday evening: Arrive in time for dinner, gather in a big circle so that everyone can have a chance to introduce themselves, go over the weekend itinerary, and take the rest of the evening to hang out and get to know one another.

Each weekend morning, a couple of featured speakers give talks with plenty of time for Q & A. After lunch, camper-led breakout sessions take place based on the group’s preferences. Common themes include real estate, travel hacking, side hustles, and life after FI.

There’s a few hours of downtime to do as you please, and the venues, which are typically rural retreat centers, often have hiking trails or other outdoor activities. In Florida, there was a trust-building challenge course in the woods. Minnesota had canoes, kayaks, and a ropeswing from which to launch yourself into the pond (which I did, of course). 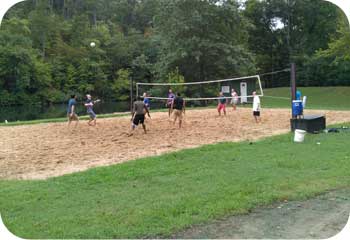 There may be a pre-dinner talk or activity — we were treated to a screening of the Playing with FIRE documentary most recently — and after-dinner activities are loosely organized, often involving a campfire and tasty campfire beverages.

The weekend concludes on Monday morning with breakfast and goodbyes to new friends. Phone numbers are exchanged, friend requests pop up on Facebook, and many a hug is shared.

Who are the Camp FI Campers?

I’ve seen a wide variety of people in my three Camp FI experiences. I would say the average age of the campers is probably somewhere in the 30s, but the range I’ve seen is age 20 to 70-something.

I’ve also brought my sons when they were 7 & 9 years old and have seen toddlers at two out of three camps, but the parents who bring their kids are at least half-consumed with parenting, which makes the weekend a different experience.

The youngest intentional attendees have been in college. They’re learning about financial independence before their careers have even begun. While it might be tough knowing that FI is at least a decade or two away, these Gen Z attendees will know to avoid the mistakes that so many of us have made. One of the attendees about my age said to the youngest attendee last weekend, “You’ve won the lottery and don’t even know it yet.”

On the other end of the spectrum are the 50-somethings who have found themselves in a position of FI and are on a journey to figure out what’s next. They’ve figured out they no longer need to work (or won’t need to work much longer), and are seeking guidance on navigating the transition to a life with a new purpose.

The most senior award goes to J.L. Collins who joined us in Minnesota last year. He wasn’t there to learn, but to socialize and share wisdom, which is something he did all weekend long.

Everyone else is somewhere “In the Middle,” which happened to be the title of one of the excellent talks at my most recent camp. They might be 20% or 80% of the way to FI, or maybe not quite sure. But they’re all interested in learning more and eager to converse with others who are marching along a similar path.

I would say that roughly half of the campers are somewhat local, at least close enough to drive, and that the other half fly in for the weekend. One benefit of driving an SUV is having room to ferry campers to and from the airport. I brought four attendees with me on the way to camp, and dropped five off at the airport after the 3-day party was over.

Among the 55 or so campers at the latest Camp FI, there were 5 physicians, 5 pharmacists (among 9 people — one camper had both degrees), and Ph.D.s. There were early-retired laborers, military pensioners, and one cheerful grad student studying the FIRE movement. The level of intelligence and intrigue was high, and that has been consistent throughout the camps I’ve attended.

The common thread among all attendees is a curiosity in financial independence, a FI-curiosity if you will. Some want to race to a particular dollar amount; others want to slow down and start living a more ideal life now. All are open to new ideas and excited to be around others who “get them.”

What Will You Get Out of Camp FI?

If you’re not into making new friends, abundant food, campfire conversation, or opening your mind to new ideas, stay home.

If, on the other hand, at least some of that sounds good, you may fit right in. Many, if not most, of the campers describe themselves in introverts in most settings, but they find it incredibly freeing to be able to talk openly about money matters and life’s challenges among a group of like-minded peers.

Most campers go home with something of great value, and not just by stealing Stephen’s laptop.  The other valuable items you’ll find floating around are new ways to fast-track your way to FI, inspiration from another entrepreneurial camper, and friends and families that you know you’ll cross paths with again, perhaps once you’ve both taken advantage of the freedom derived from achieving financial independence.

You might also get a logo tee shirt, can koozie, and other swag to take home. Eight meals, a bed to sleep in for three nights, all for under $500.

Do I Recommend Camp FI?

The energy at these events is remarkable, and I can’t imagine many people leave with any major regrets. I usually regret not having made a point to spend more time with a number of individuals, as there is only so much time to get to know 50+ people in a  weekend.

I do recommend Camp FI. With about a half-dozen locations around the U.S., there should be one within a reasonable drive or a short flight from you. While it’s not as intimate an experience as a Chautauqua in Europe or in Ecuador, it can be the spark that lights the FIRE in you.

I have nothing to sell here and make no money on referrals. I don’t think Stephen needs the promotion, either, since the waitlists are often longer than the list of attendees. But I do believe you would have a hard time not enjoying and benefitting from attending at least one Camp FI.

You can learn more from other past attendees on the Camp FI testimonials page and view upcoming Camp FI weekends here.

Have you attended Camp FI or a similar event? How was your experience? If not, is it something you would consider?

5 thoughts on “Camp FI Review: A Weekend with FI-Curious Strangers”