Are you stuck in a job you don’t love? And by stuck, I mean you can’t work anywhere else in town or nearby due to a non-compete clause?

While non-compete clauses are unfortunately enforceable in most states, there is a potential workaround, and it’s a type of practice that many physicians have gained more experience in this year: telemedicine.

Today’s guest author explains how non-competes are often enforced and what you can do to legally circumvent them, putting more money in your pocket and perhaps leading to a more satisfying position. 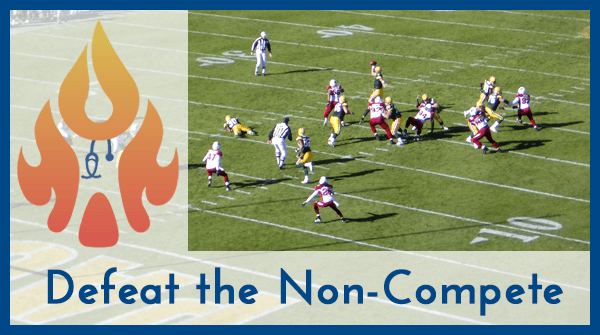 Telemedicine: How to Defeat the Non-Compete

COVID-19 suddenly thrust the medical profession into a world of virtual visits and navigating alternative ways of practicing medicine. It also led to a sharp halt of elective procedures and low patient census which became a driving force behind historic numbers of physician layoffs, reduced hours and pay cuts.

2020 became the year physicians faced mandatory changes reducing compensation, higher RVU requirements, policy changes as well as reduced staffing and support systems. For some physicians, it translated to working longer hours for the same amount of pay or working the same number of hours for less pay. This left some physicians feeling undervalued and unappreciated with no real choice but to accept the financial impact of these compensation changes.

A feeling that was riddled with limited options due to non-compete clauses in provider agreements.  As awful as all of that sounds, COVID-19 and the rise of telemedicine has given some physicians an unexpected gift.

For some physicians facing compensation changes and feelings of discontentment, they now have a real weapon against the non-complete clause in a provider agreement – Telemedicine.

Fast forward to the current pandemic and physicians all over the world were suddenly forced to practice medicine amid the rapid spread of the very contagious COVID-19, social distancing, lockdowns, lack of child care and stay at home orders.

While working from home during a pandemic has its own set of challenges especially in the face of closed schools and daycare, navigating those challenges may be worth your while as an antidote to the non-compete clause in your provider agreement. Telemedicine can be how you get a better deal with better compensation.

A non-compete clause generally prevents a physician from terminating employment with a hospital or a practice and immediately going to provide medical services for a practice or hospital that is a competitor.

A well-written non-compete clause should include a clearly defined geographic area (usually in the form of a mile radius around the practice or hospital) and a set period of time during which the non-compete is in effect. Meaning the physician is restricted from working for a competitor in that geographic area for the set number of years.

While the radius varies greatly based upon the city, service area and physician demand (i.e. ranging from 10-15 miles in urban areas to 50-100 miles in rural areas), the most common length of time in a non-compete is generally two years.

There are documented cases where a physician terminated employment with Hospital A to set up a practice or work for Hospital B and was later sued by Hospital A for breach of the non-compete clause and the court enforced the noncompete (i.e. Silvers et al v. Batchu, (2000) (Missouri court upheld non-compete prohibiting doctor from performing any medical services or engage in the practice of neurology within seventy-five miles of employer’s office); Cedar Valley v. James Wright, MD, (2019) (Iowa appeals court upheld enforcement of liquidated damages provision of a non-compete clause against a surgeon).

There are a few arbitration cases where physicians have sued their employer to try to avoid a non-compete clause for a better offer from a competitor but have lost. In short, noncompete clauses are enforced. Period.

COVID-19 and the after math of its impact on the economy and the practice of medicine has not changed that dynamic. Meaning…Courts can still enforce non-compete clauses amid COVID-19 and historic levels of physician layoffs and pay cuts and hospitals and practice owners can still go to court to enforce these clauses.

Non-compete clauses in a provider contract are serious business and can severely limit your future employment options even if your employer cuts your pay and leaves you feeling taken advantage of and undervalued.

Here is how it can work for you. First, you must practice medicine in a specialty where working remotely from home is an option. Certain specialties are obviously non-starters (i.e. surgeons and emergency medicine physicians) while other specialties may not be (i.e. psychiatry and psychology).

The easiest way to determine this is by whether there are telemedicine providers recruiting within your specialty.

Second, the home base from where you will be working remotely must be located outside of the geographic radius identified in the non-compete clause of your provider agreement. The center point of the radius in a non-complete clause is usually the actual location of the hospital or practice, not your home.

Non-compete clauses in existing provider agreements have largely not accounted for telemedicine or working remotely from home. Even the non-compete clauses in newer provider agreements signed this year have not caught up with the realities of practicing medicine during COVID-19 or telemedicine. Meaning noncompete clauses still primarily identify the hospital or practice location as the center point of the radius regardless of whether the physician is actually working from home.

If you feeling the financial impact of a pay cut, a change in compensation structure, reduced hours or higher RVU requirements for the same or lesser compensation, Telemedicine can be the antidote you need to get you unstuck from your current employer and on to greener pastures.

If you have questions about this article or need help navigating the non-complete clause in your provider agreement, please contact Contract Rx at [email protected].

5 thoughts on “Telemedicine: How to Defeat the Non-Compete”