When asked for my best tip for doctors and others to grow wealth and become financially independent, I usually answer with three words that echo the warning from the loudspeakers as you enter the subway car in London’s “tube.”

That is, mind the gap between your earning and spending and do what you can to grow it. One way to do that is by earning more, and I do encourage that. The other is to spend less, and I have to agree with Dr. Jim Dahle, the author of today’s Saturday Selection. Some doctors spend too much and simply don’t realize it.

He explains why in this post, which was originally published on The White Coat Investor. 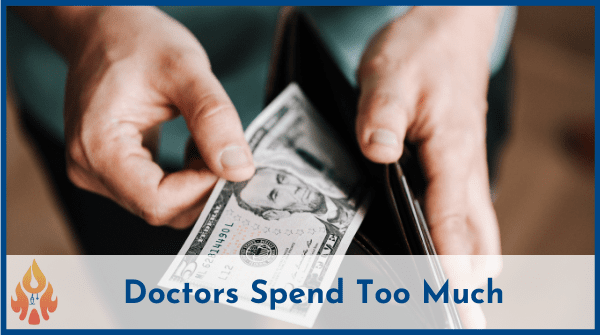 Once every couple of years I have medical students from the local medical school over for dinner. At some point, the conversation usually turns to finance, and I commiserate with them about their loan burdens. I typically toss them a few pearls of wisdom, wish them good luck, and we move on to something else.

They always think it’s funny when I say, “If you can’t live on $200,000, you have a spending problem, not an earning problem.” Of course that’s true, they think. They can’t even imagine why I would say such a thing, since no doctor can possibly have trouble living on $200,000.

I almost never use that line when I’m talking to attendings, even though it is no less true. It comes across as preachy, and sometimes impossible. Why is that? Well, it’s because doctors spend too much money. I’ve spent a lot of time thinking about why that is and came up with 10 reasons. Let’s talk about them.

Reason number one is that we deferred gratification for so long, that when we first start getting a real paycheck, instead of having a little lifestyle inflation, we have a lifestyle explosion. When you tell yourself the big money is coming for a decade or a decade and a half and then it finally arrives, well, it seems like time to buy a bunch of stuff you’ve been putting off for pretty much, well, forever.

#2 Lack of Understanding of Our Progressive Tax Code

Another issue is that docs don’t have much financial literacy. In particular, they don’t understand how the tax code works. They see that their salary after residency will go up by five or six times, so they assume they can spend 5-6 times as much as they did during residency. They forget that 1/4 to 1/3 of their earnings will go to the taxman.

A 300% increase in net earnings is still great, but it is very different from a 500% increase. To make matters worse, doctors put off a bunch of things during their training (see #1 above) and those things include saving up a down payment, starting retirement accounts, getting enough insurance in place, and paying off their loans. Add those things on to the tax bill and all of a sudden their increased spending potential is really only 50%-100%.

Another major difficulty for doctors is that everyone else sees them as rich, even if their incredibly negative net worth actually ranks them as being some of the poorest people on the planet. Their parents, siblings, spouse, children, and physician partners all have expectations that their spending will be in keeping with their new position in life. Except their financial position hasn’t actually changed.

They may also be hanging out in a circle of high-earning friends, and feel some pressure to keep up with the Joneses with regards to vacations, schooling, transportation, housing, recreation, and children’s activities.

Here’s an idea—make it easier on yourself and start hanging out with like-minded peers on the WCI Forum, Facebook, or Reddit groups. This is a circle of friends that will help you fight and win the battle of expectations. [PoF: I’ll add in a plug for my Physicians on FIRE and fatFIRE groups, although the latter may not be helpful in this regard.]

#4 A Sense That Money Is Their Most Renewable Resource

Some doctors get this idea in their head that they can get $15,000, $20,000, $30,000, or even $40,000 every month for the rest of their life. They can’t ever foresee a period of time when their income could drop or they might not be able to work (although the COVID economic downturn gave many their first experience at a massive drop in income). They have staked their entire financial plan on being able to work until the day they die.

Sometimes, they add on a disability policy to protect that income, but they often cannot protect the entire wad. Plus, there are a lot of things that can cause your income to drop that can’t be insured against, like complaints to the medical staff or medical board. And disability insurance only pays until your mid-60s, anyway. At a certain point, they will need either savings or another source of income.

Doctors are people, just like everybody else. People spend what they can see.

#6 Not Sure What to Do When Retirement Account Is Full

Some doctors don’t understand that they can save for retirement outside of their employer’s retirement account. And that might only allow for $19,500 a year, hardly enough to fund the desired retirement of most physicians, especially if they don’t start early or don’t invest it aggressively.

Many doctors don’t even know about Backdoor Roth IRAs, Stealth IRAs, and Individual 401(k)s. And heaven forbid they invest in a taxable account. They’d rather buy whole life  insurance as their “financial advisor” recommends.

Many doctors become disconnected from their middle-class roots or never had middle-class roots in the first place. These are doctors who think that cars that have more than 50,000 miles on them aren’t reliable. Or that a $20K car is a beater. Or that the local state university can’t possibly provide a decent education, much less the local public schools.

They must shop at Whole Foods, not Walmart. They can’t imagine flying coach on an overseas flight. I’m always amazed that the public schools are just fine according to people who don’t have the cash to send their kids to private school, but that apparently 95% of the country has terrible public schools if you ask doctors or their spouses.

I’ve even been told that the public schools in towns I’ve lived in are “terrible” despite all objective evidence to the contrary. I’m told it is impossible to live on a resident salary, when fully half of the households in the country seem to be able to get by on less than that.

Some doctors spend too much because no one ever told them they need to save 20% of their gross income for retirement. They simply haven’t run the numbers and realized that they need to save a massive chunk of their income if they actually want to meet their financial goals. Even at the State U, college is expensive stuff, but that’s nothing compared to retirement.

Most physicians will need a multi-million dollar nest egg to maintain their standard of living after retirement. That doesn’t just magically appear at the end of 30 years thanks to the miracle of compound interest. A big chunk of it actually has to come from brute force savings.

#9 Don’t Understand That Doctors Aren’t All the Same

Sometimes doctors think that just because they went to medical school with somebody that they should be in the same socioeconomic class. Guess what? There’s a big difference between your possible lifestyle when you’re an academic pediatrician making $150,000 and a plastic surgeon making $750,000. That surgeon can make all kinds of financial mistakes and waste all kinds of money and still come out smelling like a rose. If that pediatrician tries to live like the surgeon, it isn’t going to end well.

Even high-end doctors fall into this trap. They know they’re in the 1% but they forget that the 1% encompasses a very wide range of incomes. Too seldom do we look at those who make less than we do and feel gratitude for our income, because we’re too busy enviously looking at those who make more than we do.

Sometimes doctors and other high-earners fall into the trap of thinking that they can spend their way toward happiness. That bigger house and nicer car will surely make us happier, right?

The next step after realizing stuff doesn’t make them happy is to start seeking experiences. They travel the world and take up all kinds of crazy new hobbies. But, in the end, there are really only three things we need to be happy, and none of them cost much money:

I mean if there is something or some experience that you can buy that you think is going to make you happier and you can afford it, then go buy it. But pay careful attention to how much happiness you actually get from it and adjust future spending accordingly.

Many of my favorite vacations and trips are the cheapest ones. And I can assure you I’m no happier driving my wife’s 2016 Sequoia than my 2005 Sequoia, even if hers does get the boat up the hill a little faster. You can never get enough of what you don’t need.

14 thoughts on “10 Reasons Doctors Spend Too Much Money”