In the Tale of 4 Physicians, we analyzed the impact of different spending budgets on wealth creation.  Each of our 4 physicians was married with 2 kids and had a household income of $300,000.  In the second post in this series, we explored the financial impact of Dr. Anderson working after achieving FI.  Next up is Dr. Benson.

Dr. B had the second lowest annual spending at $120,000.  Dr. B heard that Dr. A was considering an early retirement after 11 years in practice and he promptly scoffed at the idea.  With a net savings rate of 44%, Dr. B was already saving way more than most of his peers.  And spending less.  But Dr. B got an uneasy feeling when he parked his 3-Series Beamer next to the 5-Series and 7-Series performance vehicles in the physician’s lot.

Logging into facebook, he saw his colleagues and their families vacationing in Paris and enjoying new pontoons at their lake homes and Dr. B started to feel inadequate.  It seemed half the kids in his upscale neighborhood were in private school and how many of their parents were doctors?  The insurance salesman / financial advisor next door had three kids in private school, for crying out loud.  And a new RV!

Dr. B Opts for Lifestyle Inflation

Dr. B and his wife decided it was time for a lifestyle upgrade.  They’ve never seen Dr. Dahlgren’s balance sheet, but he’s obviously doing quite well.  I mean, even his kids fly first class when they go skiing in the Alps.  So from now on, Dr. B is going to live more like Dr. D. 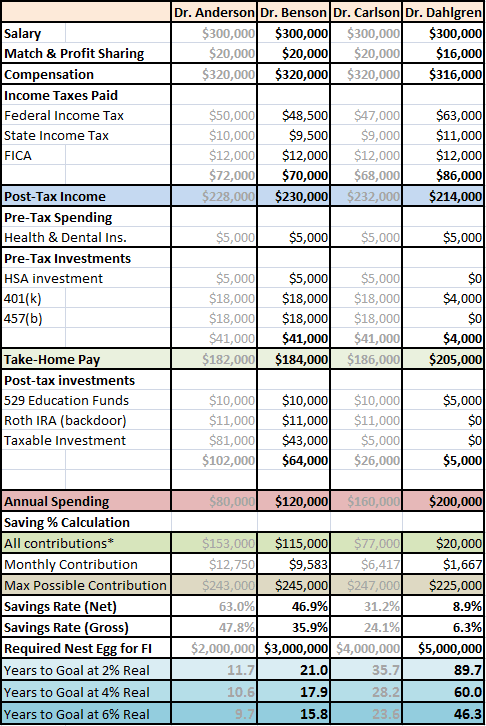 To keep things fair, we’ll assume Dr. B got the same market return that Dr. A saw over the 11 years that it took her to become FI, a return that outpaced inflation by 4%.

His nest egg after those 11 years is worth about $1.5 million in today’s dollars.  By golly, he’s rich!  Time to start spending like it, so let’s assume his spending from this point on will match Dr. D’s $200,000 and see how that changes Dr. B’s future.

Dr. B was on track to be financially independent in the next 6 to 9 years with a nest egg of $3 million.  By upping the spending, he can expect to work another 17 to 42 years with real returns in the 2% to 6% range to attain the larger required nest egg of $5 million.

Keep in mind, we are starting from a baseline of having already been an attending physician for 11 years, which would put him at least in his early forties at the beginning of this exercise.  With excellent market returns, he may still be able to retire close to 59.5 when he will have access to the 401(k), but it’s  best not to rely on 6% real (8% to 9% nominal) returns.

What if Dr. B waited to upgrade his lifestyle until he retired?  In other words, how long would it take Dr. B to amass a $5 million dollar net worth if he continued his current spending of $120,000 per year?

The Benefit of Delayed Gratification

In this case, we’re no longer relying on stellar returns to have the ability to retire in style at a reasonable age.  You could call this a benefit of “delayed gratification” although spending $120,000 a year could hardly be considered  a life of deprivation, and not everyone will be happier indulging in $200,000 of annual spending.  Not all of us are comfortable living the Lifestyles of the Rich & Famous.

Also, remember that Dr. B has two children.  If his family is spending  $200,000 per year while the kids live at home, those kids will be accustomed to a life of luxury.  While some people may want that for their children, I think it can be a setup for disappointment and financial difficulties later on when they are on their own.  I think it may be best to wait until the kids are self supporting or at least living away from home before rewarding yourself with a big lifestyle upgrade. That, of course, is a personal decision.

Have you upgraded your lifestyle? Was it gradual, or a virtual lifestyle explosion like Dr. B underwent? Is financial independence within reach for you?

2 thoughts on “4 Physicians Revisited: Dr. B & the Impact of Lifestyle Inflation”