Many members of the Doximity medical professional network were given the opportunity to invest in the recent Doximity IPO with up to $5,000 at a share price of $26. 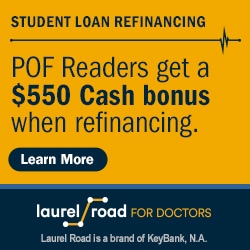 I don’t believe I received an invitation to invest (maybe it went to my Spam folder), but if I had, I would have ignored it, anyway. I don’t get excited for the latest initial public offering (IPO) of a newly public company, and I don’t often dabble in individual stocks.

If you did get the invite and acted upon it, you’re happy you did. By early August 2021, your investment doubled in value in a matter of weeks. A month later, with a price in the $90 range in early September, it’s nearly doubled again!

The take-home lesson should not be that it’s easy to double or quadruple your money, even if you actually did with this one. Some IPOs do well, and some do not. There’s a reason some believe IPO stands for “It’s Probably Overpriced.”

No, there are other lessons to be gleaned, and Jonathan Ford Hughes of PhysicianSense, where this post was originally published, shares them. 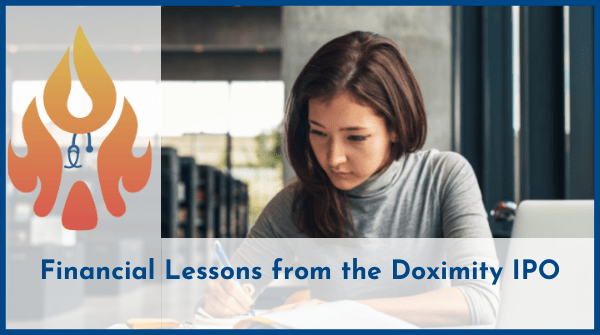 Doximity: You all know it, and approximately 80% of you use it. Now the story of the  “LinkedIn of medicine” can be told in three big numbers. Here they are:

Any of those figures is enough to send a doctor on a one-way trip to Tahiti. Just last week, all three combined to make Doximity CEO Jeff Tangney the talk of Wall Street. Tagney recently took the company public on the New York Stock Exchange. Today, Doximity’s market cap stands at $9.4 billion. It’s IPO brought in $500 million, making Tagney’s stake in the company worth just south of $3 billion.

From the jump, the market liked Doximity. The initial public offering (IPO) price was $26 per share. As of writing this, a DOCS share (we love that ticker) will cost you about $90. In the eyes of Wall Street media and analysts, there’s a lot to like.

Seeking Alpha called Doximity a “potential Teladoc killer.” On the surface, Doximity seems to defy the conventional wisdom against hybrids. Buy a hybrid bike, for example, and you have a mediocre road bike and a mediocre mountain bike. Buy Doximity, however, and you purchase a share of a company that has the galvanizing effect of LinkedIn, plus built-in telehealth capabilities.

“Doximity’s growing platform of medical professionals and healthcare customers could be a real threat for Teladoc,” Seeking Alpha reported. “If Doximity utilizes its network and starts to introduce similar offerings as Teladoc such as virtual primary care and chronic care management, it may spell trouble for Teladoc.”

And every other mediocre telehealth solution, it would seem.

Investors also appear to like the built-in connection to pharma. As we’re sure you’re well aware of by now, there is no free lunch on the web. You get a free basic Doximity account, and Doximity makes money by selling pharma product placements and physician recruiting solutions.

The Value of Leadership

Doximity has something else going for it, too: Tagney. CNBC ran a lengthy profile of the CEO, which touts his track record and demeanor. Though you may not have heard of him until recently, Tagney is a tech veteran. You might remember (and still use) Epocrates, the app that allows you to look up drug safety information, dosing, interactions, etc. That was Tagney.

Doximity’s CEO very well may epitomize the notion that we learn more from our failures than we do from our successes–if you can even consider Epocrates a failure. He launched Epocrates at the height of the dot-com bubble. Though it was among the few survivors, and it did go public, in the end, Epocrates was acquired for a measly $300 million.

Tagney parlayed what he learned from the experience into creating Doximity, taking a more measured approach to taking the company public. The results speak for themselves. Overnight, Doximity went from being a known-entity to doctors, to a purported Wall Street unicorn. Consider that it’s last round of financing, back in 2014, put the company’s value at less than $400 million.

Doximity’s story contains some salient lessons for doctors–whether they’re of the entrepreneurial set, or content to be employed.

There’s an intoxicating myth in American business of overnight success. The story-so-far of Doximity is yet another counterpoint. While it may have been tempting to put as much cash as possible into the company, Tagney resisted.

In fact, he says the company is profitable because it hasn’t used the $50 million it raised almost a decade ago. In the realm of wealth-building, patience is a virtue–as it is in so many other areas of life.

Doximity took pains to know doctors and their needs. It still does. The company brings together a group of physicians each year. During these retreats, the doctors weigh in on new products, brainstorm, and hear about what’s in the works.

How often do you think critically, from a business perspective, about the needs of your customers–the patients? Employed physicians might dismiss this suggestion, but it’s critical for you as well. Patients don’t get seats in the conference room, but you do.

Have a Simple Mission

Whether it’s for yourself or for your business, you must have a personal mission. It should be clear and succinct. Doximity’s success appears to be anchored on its guiding principle: “Our mission is to help physicians save time so they can provide better care for patients.”

The Wall Street analysts have noticed. “I absolutely love it when the very first thing you see on an S-1 is the mission statement, and that’s what they did here,” said the Motley Fool’s Brian Feroldi. A strong, succinct mission statement optimizes your decision-making process. Mulling a professional or financial move? Does it support or refute your mission?

Doximity could have followed the well-trodden path to rocketship growth in the tech space. What nobody tells you, though, is that the path is littered with the bodies of dead and dying companies. Despite what you may want, customers dictate how quickly a company can grow.

In Tagney’s case, there are only so many doctors, so many pharma companies, and so many physician-employers. Those factors didn’t bar Doximity from a blockbuster IPO, they simply defined Doximity’s playing field. Regardless of where and how you practice, there is a path to prosperity with sufficient planning.

Did you invest in the Doximity IPO? What is your biggest take-home lesson the company’s success?

5 thoughts on “Financial Lessons from the Doximity IPO”