Early retirement sounds amazing, but what if it doesn’t sound amazing to your partner? That makes things a bit challenging, to say the least.

Cubert, an aspiring retiree who plans to abandon the cubicle in his mid-forties, provided today’s guest post in which he discusses strategies one can use to make the FIRE life sound like a winning proposition (and how not to approach it, as he did initially).

Cubert and I have a fair amount in common, living in the same state while owning property in the same part of another (here’s his and here’s mine). We’re also husbands, fathers to a couple kids, and the first in our families to concoct an early retirement scheme.

You can learn more about Cubert at abandonedcubicle.com. Take it away, Cubert!

Finding Early Retirement Bliss (Hint: You need to be on the same page with your significant other)

A little about me: I grew up in Michigan and moved out to the Twin Cities after college. I’ve spent most of my adult life on corporate auto-pilot (save 15% of my income, buy a house, drive a decent car, maybe retire at 62?)

Now married for 11 years and a proud father of twin preschoolers, life has gotten more meaningful, but also more complicated. I credit marriage and fatherhood with my career success. Ironically, that type of success I can do without.

I’m planning to retire early at age 46 and be done with Fortune 500 office politics and all the baloney that entails.

Question is, is my wife ready for this change?

So often in a marriage or any domestic partnership, there are little disagreements and annoyances that pop up. Sometimes we let those things slide until they become ginormous conflagrations, leading to much bigger problems.

This can certainly be the case with Early Retirement. If you’re not on the same page with your significant other, be warned!

I remember coming across the post on Mr. Money Mustache’s blog about three years ago, when I started contemplating my own early retirement. MMM apparently got an email from the wife of a newly-converted Mustachian.

This lady was absolutely LIVID at this notion of saving money. To her, it was tantamount to deprivation of the third degree.

Whether that was a troll is tough to say. But it sure made for entertaining bloggery. MMM used the email exchange to touch on a key tenet of early retirement extremism: If you don’t take the journey together, you’re screwed.

How to get off on the wrong foot

In my case, thankfully, the situation wasn’t as bad as the email exchange that inspired the infamous MMM post. But Mrs. Cubert and I certainly had our differences, right out of the gates.

“Honey, I don’t like my job. You know how crappy the stress is, and I’ve hated working all those weekends these past several months. I’d like to retire early.”

“No, no, no. See, there’s this guy who writes about the simple math behind early retirement. We’ll be just fine. You should go read his stuff. It’s really funny.”

And so the dialog was opened up. Clearly, I started off on the wrong foot. And to make matters worse, I kept bringing home all these wonderful nuggets of wisdom from MMM only to compound things.

“Honey, you’re not going to drive to the grocery store, are you? It’s only four blocks away, and the sidewalks all look to be clear of ice and snow.”

(Sigh, this time with a stoic F-you gaze.) “Sure. We can walk instead.”

I felt like I just stumbled across the meaning of life with this wonderful early retirement jazz. And yet, at every turn I was met with skepticism. After all, we had twin 18 month-olds to care for now. Talk about adding a little stress to the conversation!

I had to make this pitch work. It wouldn’t make sense for me to retire early and have an unhappy marriage on my hands.

I turned to the magic spreadsheet for help. Applying the simple math behind early retirement, I was able to shed some science on the proposal:

Cubert’s Five Year Plan (DO try this at home! Carefully…)

Then came the hard part. (What was I thinking?)

We can always go to the bar to watch our alma maters during college football season. (As you might imagine, this went over like a wet blanket too.) [PoF: Who is this alien who doesn’t want to go to a bar to watch college football? Maybe the sting of the 2016 season was still lingering.]

6. “Honey, did I mention that I’ll need you to cut my hair at home from now on?” I kept the scissors hidden for a few months just to be safe. Those Wahl clippers usually can handle the job on my receding hairline anyhow…

Selling the Dream (with patience and persistence, and of course, DATE NIGHTS!)

That’s right, date nights. At least every other week we would find a sitter for three hours so we could escape for a little while as husband and wife, leaving mommy and daddy duties behind.

Although the cost of a sitter and the act of dining out costs some good coin (roughly, $125 per outing), we found it the price of admission for sanity while raising twin infants / toddlers.

This is a good example of where you can play “Buffet Catholic” with MMM’s scripture of Frugality. MMM and Mrs. MM have one kid. When you have more than one little tyke in the mix, and especially twins, the situation is, well, more of a situation. Break that extreme frugality commandment and go get your date night on!

Over time, early retirement SELLS ITSELF

Persistence is really important in getting your significant other on board. Over time, I was able to show Mrs. Cubert just how much faster our net worth was growing.

She began to see how passive our four rental properties truly were. Adding a few more houses to our portfolio was a key tactic in the early retirement scheme.

I highly recommend becoming a landlord, if for no other reason than to diversify your investments.

As it turned out, I had a cheerleader on my side with my newfound biking habit. The Mrs. even got into biking herself (though it didn’t hurt that I got her well equipped with a fab bike and gear…)

We don’t miss cable all that much. There simply isn’t enough time in our busy days to enjoy more than one hour of it (if that) before we cash in at night.

When we do watch the tube, we rely on our Apple TV for all the content we need. A handy digital antenna beams in high-def football on weekends, for FREE.

Remembering to drop subtle hints of the life ahead

Mrs. Cubert will work part time for another ten years after I retire early. She’s almost ten years younger than me, so she’s got more left in the tank.

She runs her own small business as a chiropractor, so she doesn’t have to answer to a boss or deal with office politics.

My commitment is to take care of the kids when they get home from school and during summer breaks. Eventually I’ll enlist the kiddos’ help in managing the rental properties. What better way to become handy, than working alongside their papa!

Another key selling point? Guess who gets to make dinner just about every night? That’s right – yours truly, Mr. Mom. 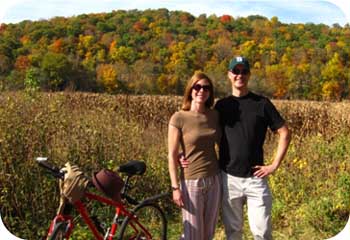 The main thing I’d advise to someone newly converted to the ways of Financial Independence, Early Retirement is this: GO SLOW. You have time.

Contain some of that enthusiasm, and let the tape unwind naturally. Doing this all over again, I’d have worked in all of the budget changes slowly over time, particularly the ones that directly affect the lifestyle my wife had grown accustomed to.

Mrs. Cubert has always been thrifty, but now she’s like a hawk. I love that I have a partner I can discuss money with and end up on the same page. It’s not always easy, but we have the trust factor that it takes to go forward on this journey.

My parting tip: On that haircuts idea, I’d continue going to the barber at first. Best to avoid sharp objects when you push high octane frugality on an unsuspecting wife!

Readers, have you broached the subject of early retirement with your spouse? How did that go? Do you have any tips to help get your partner on board with this crazy idea?

45 thoughts on “Early Retirement Bliss: Getting Your Partner on Board”