Every day is a school day. The school year may be winding down for our boys and girls, but for me, school is always in session. I continue to read, learn, and find inspiration from many different sources.

Today’s source is a volume that I didn’t necessarily need to read — after all, I had already become debt free by forty. Nevertheless, I enjoyed reading Dr. Fawcett’s story regarding his relationship with money and the advice he has for physicians who are buried under a pile of debt and looking for a decent shovel. This book can serve well as that shovel.

The Doctors Guide to Eliminating Debt 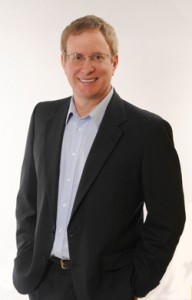 The author was kind enough to send me an autographed copy to peruse. Dr. Fawcett is a general surgeon who worked a couple decades in a busy private practice, transitioned to providing locum tenens surgical services in nearby critical access hospitals, and recently retired early from medicine in his mid-fifties.

Through my reading and email exchanges with Dr. Fawcett, I learned that the good doctor and I have a lot in common. Each of us is part of a family of four with two boys two years apart. We both value an early retirement, debt-free living, and time to pursue additional interests including writing. We both believe in charitable giving and live richer lives as a result.

This featured book is organized into nine chapters in 159 pages, with an additional 10 pages of bonus material. Header titles and quotes break up the text nicely. The book can be read on one longer plane ride or over the course of a few evenings. 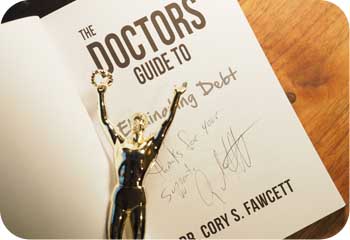 Who Needs a Book on Eliminating Debt?

In my experience, paying off debt is pretty straightforward. You pay it off. Then it’s gone. There it is — a six word book, much like Weird Al’s “This song is just six words long.”

But this book isn’t just a how-to. It also covers why-to. Dr. Fawcett shares his debt story and how he attacked debt when he realized it was getting out of hand. He discusses his perspective on mortgage debt and housing in general. The last couple chapters deal with what you can do when you are debt-free and offers a straightforward introduction to investing.

Dr. Fawcett is certainly qualified to write this book. Although his student loan debt was small thanks to a Navy Scholarship, he found himself a half-million dollars in debt as a young physician. He was inspired to do something about it by a different book from another era — Debt-Free and Prosperous Living — and he wrote this book to motivate others to address their debt burdens and improve their lives much in the way his life was once improved.

Initially, we learn how the author and his family were keeping up with the “Dr. Joneses” as a young attending surgeon. In  fact, with a motorhome, new cars, and an upgraded home, the Fawcett family’s debt increased from $500,000 to $640,000. We also discover that he made that debt disappear in an incredible six short years using the well known snowball method of debt payoff.

While I love being debt-free almost much as I’ll love being pager-free, Dr. Fawcett may go a tad overboard in calling debt a disease. He uses terms like “malignant credit carcinoma,” ” Alzheimer’s debtmentia” aand “debtabetic nephropathy” to describe the affliction. I still believe there can be such a thing as “good debt” under the right circumstances, but then again, this is a guide to debt elimination, so his debt-as-a-disease proclamation makes sense.

He does make some excellent points on housing and its potential pitfalls. I once fell into the trap of believing I  deserve to have a “doctor’s home.” You know, because it’s fun to keep four bathrooms and three floors of home spotless. And the schools need the income that comes with the property taxes on a 4,000 square foot waterfront home within the city limits.

“Does having five acres instead of one really make you happier? Will 5,000 – 10,000 square feet improve your well-being more than 3,500 square feet? If you bought the house for your family, but then you stay at work late to earn the money to pay for it and never see them, who are you kidding?”

These are excellent questions to ponder.

As I stated earlier, there’s only so much that can be written about actually paying off your debt. Dr. Fawcett recommends paying down the smallest debts first and celebrating your progress. The more financially sound “avalanche method” of paying down the highest interest rate debt first is another option. The bottom line is you’ve got to make the goal, maximize income, keep spending in check, and chip away at the debt until it’s gone (or forgiven under certain state or federal programs like PSLF).

One of the later chapters focuses on helping you stay debt-free once you achieved the coveted status. Automobiles, vacations, restaurants, and even coupon clipping are covered.

There are no earth shattering revelations, but I find it comforting to know I’m not the only physician who has no qualms with using a discount coupon or certificate. For the record, we’re not talking about 30 cents off Shake-n-Bake. His example is saving $6 per person on a boat ride around Key West for a family of four. Sign me up! I’ll meet you at Sloppy Joe’s afterwards. White beard optional.

The book concludes with a chapter entitled “The Finish Line.” The concept of Enough is approached using quotes from John D. Rockefeller, the Onceler from The Lorax, and a biblical parable. Dr. Fawcett’s faith is evident throughout the text — he references his tithing and quotes the Book of Proverbs — but religion is not prominently featured as it might be in a Dave Ramsey book.

Who Should Buy This Book?

This is a solid, quick read that a late-year resident, fellow, or young attending could certainly benefit from reading. When you’re surrounded by the Dr. Joneses the author refers to, it’s comforting to see a different perspective and understand that the choices you make now can greatly impact your future financial health and happiness. 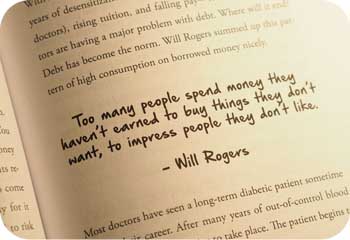 Don’t want to shell out the $7 (Kindle) or $17 (paperback)? [prices at time of this post’s publication] You can have my copy. After all, like Dr. Cory S. Fawcett, I made it a priority to become debt-free and never looked back. Comment below and I will randomly select one of you (via Google’s random number generator) to receive the book, and will ship it to you post-haste. [Update: Congrats to Millennial Doc for winning the raffle!]

Are you hoping to eliminate student loan debt? Visit my student loan resource page for gobs of resources, referral bonuses, and an exclusive offer of $50 to your favorite charity if you choose to refinance via a referral from me.

53 thoughts on “Book Report: The Doctors Guide to Eliminating Debt”