I previously  wrote one of my favorite posts after helping a retired couple free themselves from their financial advisor, greatly simplify their portfolio, and saving them more than $20,000 per year in the process.

For details, please read From 28 Funds to 3, then return here for a follow-up. In summary, the couple previously owned 28 funds (with 48 positions between three accounts). The weighted average expense ratio was 0.64 and they were subject to an AUM fee of 0.73%.

By the time we were done, there was no AUM fee, the portfolio’s expense ratio was 0.08%, and their desired asset allocation of 45% US Stock, 15% International Stock, and 40% Bonds was maintained. The move saved them over $20,000 per year in fees.

To avoid paying capital gains taxes, we kept a couple of mutual funds in the taxable account, but the vast majority of the portfolio was converted to a simple three fund portfolio.

End of Year Rebalancing and a Required Minimum Distribution

The husband and wife each hold an IRA, and they both turned 71 that fall after revamping the portfolio. That means they both turned 70.5 in the spring, and the time has come for each of them to take their first RMD. As I did with the extreme portfolio makeover, I offered to help them with this process.

The IRS allows you to take the very first RMD as late as April 1 of the year after you turn 70.5, but after that, each one must be taken by the end of the calendar year. In order to avoid having to pay taxes on two sets of RMDs in the same tax year, we decided to take the first distribution in December of 2017.

Note that RMDs have been pushed back to the year in which a person turns 72 in the SECURE Act that became law in December of 2019, but this RMD was taken before the updated legislation.

What is a Required Minimum Distribution?

The IRS doesn’t want people to avoid paying taxes on tax-deferred accounts forever, so you’re required to withdraw a specified amount annually once you’re past your seventieth birthday. If you fail to do so, you’ll pay a stiff penalty equal to half of the RMD, or about 1.8% to 26% of the retirement account, depending on age.

The percentage of the portfolio required to be liquidated (and subject to income tax) starts at 3.65% at age 70.5 and slowly ramps up until it finally plateaus at 52.63% at age 115.

There are a couple of exceptions to the “required” part of the RMD.

If you are still employed, you are not required to take the RMD from your current employer’s 401(k), although any IRA or old 401(k) with money remaining will still be subject to RMD. You also have the option of donating to charity directly from your account in lieu of withdrawing the RMD. You can do so tax-free for an RMD of up to $100,000.

Under the current tax code, Roth accounts are not subject to RMDs. For more information on RMDs, see what our friends at the IRS say in this RMD FAQ.

Therefore, another way to avoid ever being forced to take an RMD is to completely vacate your tax-deferred accounts via withdrawals and Roth conversions prior to age 70.5. Whether or not it makes any sense to do so will depend on the size of your tax-deferred accounts, the age at which you retire, and the tax bracket you find yourself in as a retiree. Personally, I don’t plan on having any tax-deferred dollars left by the time I reach 70.5.

The portfolio we’re working with is held at Fidelity, and the brokerage makes it very simple to click through and take your first RMD. When logging in, this is the first thing we see, front and center. 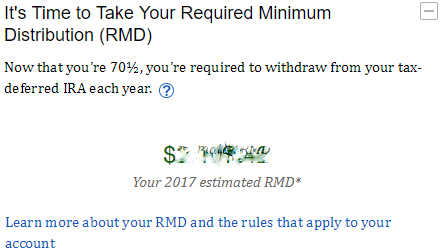 Fidelity tells us how much to withdraw, and the couple had spoken with their accountant and knew about how much money to withhold to pay federal and state income taxes based on both the total value of the two RMDs plus additional income sources.

We opted to round up to the nearest hundred dollars on the RMD and similarly made sure we withheld at least as much as recommended by the CPA for federal and state income taxes. It was straightforward to accomplish on Fidelity’s website, and we repeated the process for both husband and wife. Altogether, both RMD’s were withdrawn and taxes withheld in under ten minutes.

We had initially talked about rebalancing once or twice a year, but a peek at the portfolio over the summer showed we weren’t too terribly far off the desired 60/ 40 Stock / Bond ratio, so we let it ride.

Now that we had taken the RMDs, dumped the dollars into their taxable account’s money market fund, and transferred some excess cash from a checking account, we had some cash to deploy and some work to do to get back to the desired asset allocation.

Before I discuss what we did here, I should mention my own rebalancing strategy. It can be summarized in three words.

When accumulating, it’s pretty easy to just keep track of the current state of affairs and every month when it’s time to make an investment in my taxable account, I put money into whichever category has a deficit. If things were to get really out of whack, I could exchange in my Roth or tax-deferred accounts, but that doesn’t happen too often.

How often should one rebalance? If you’re not rebalancing “on the fly” as I do, you ought to rebalance on a set schedule. Once or twice a year should be sufficient, and you might also set limits on how far out of balance you’ll allow the portfolio to drift. For example, rebalance when an asset class is off by at least 2.5% or 5% from desired (62.5% or 65% stocks when you want 60%).

Rebalancing with a Spreadsheet

In the “decumulation” or withdrawal phase, winging it doesn’t work as well, since you’re not adding money on a regular basis anymore. If you’re in a situation where you’re making frequent withdrawals on a regular basis, you could simply take from the asset class that is overweight, but that’s not the approach this couple is taking. I suspect they’ll be withdrawing from the portfolio once per annum at the end of the year.

This is what the couple’s portfolio looked like after the RMDs and before any rebalancing. Note that His and Hers refer to the two IRAs and the Joint account is a taxable brokerage account.

This isn’t too bad. You can see we’re a little heavy on US stock and light on bonds; that’s not a big surprise given the year we’ve seen with US stocks up about 19% year-to-date. International stocks are a touch overweight, as well. The cash holding is unnecessary since the couple holds a substantial emergency fund with more than six month’s expenses in a separate account not tracked here.

How do we go about rebalancing? With more spreadsheet work!

First, let’s define the goals. I set out to accomplish two tasks in the most tax-efficient manner, and we were able to achieve both in four moves.

The second goal was to move the international allocation from the tax-deferred IRA to the taxable account in order to take full advantage of the international tax credit, which would be wasted in a tax-advantaged account.

To avoid any potential capital gains taxes, we planned to avoid selling mutual funds in the joint taxable account.

This is what the asset allocation looked like prior to rebalancing.

To get back to where we wanted to be, I multiplied the percentage by which we were off by the total value of the entire portfolio. I then made one move at a time to get us to the desired allocation. The two goals were met with a total of four tax-free transactions.

When the transactions are complete, we’ll be right back where we want to be. Rebalancing maintains the desired asset allocation, keeping the risk level at the appropriate level selected by the investor. Some evidence suggests improved returns with regular rebalancing, but that isn’t necessarily the case in every situation.

In order to rebalance your own portfolio, you can set up a spreadsheet similar to the one you see here. The only formulas we used are simple addition, subtraction, multiplication, and division. I had essentially no experience with spreadsheets before I started using Excel in recent years, and it’s not difficult to learn. The ability to work a spreadsheet is an exceptionally useful skill for the DIY investor.

Have you had any experience with RMDs? Do you rebalance with a spreadsheet? What’s your rebalancing strategy? Let us know if the comment box below!