In real life, I don’t talk about money with many people, but there is one retired couple that I discuss dollars with rather freely. In recent years, as I’ve broached the subject of early retirement, they’ve taken a little more interest in what I’m doing, and have taken a closer look at what they’ve been doing.

As you might know, I am a Do-It-Yourself (DIY) investor. The man in the couple I’m talking about is a DIY master in many ways. He repairs things. He designs things. He builds things. Then he remodels them. He built a complete 24′ by 30′ workshop for the sole purpose of building more things. Above that workshop, he built an efficiency apartment, complete with dormers, a kitchen, and bathroom. It’s quite a place.

But he’s never been a DIY guy when it comes to money. He understands it well, and taught me some valuable lessons over the years. He was a business owner, and had to hire someone to manage his businesses’ retirement plan for him and his employees. After retiring, his retirement savings continued to be managed by the same financial advisor.

From 28 Funds to 3: Simplifying to a 3 Fund Portfolio

Which Advisor Would You Choose?

In the six or seven years since he retired, the company that managed his money was sold or merged with another company two times, but he kept the same advisor whom he had grown to trust. Rather abruptly this fall, his advisor resigned, and he was offered two new names from which to choose.

Actually, a better place to start is by looking up the names on BrokerCheck by FINRA. That is what this particular gentleman did. Guess what? Neither of the two names had a clean record. One had been terminated for “VIOLATION OF A PROVISION OF THE FIRM’S COMPLIANCE POLICIES AND PROCEDURES.” I didn’t use ALL CAPS for emphasis – that’s just how FINRA states it.

The other (I’ll spare you the lengthy ALL CAPS) listed the following allegation: “Customer complaint alleges unsuitable purchase and sale of annuities resulted in undisclosed surrender charges and unforeseen tax obligations resulting in damages of approximately $37,000.”

Which advisor would you choose?

A Look at the Retirees’ Portfolio

In the past, I had casually mentioned to the couple that it wouldn’t be too difficult for them to manage their own nest egg if they had any interest. It would also save them some money, of course. How much? Well, we didn’t really know until we took a closer look at his current investments and fee structure.

The portfolio under the microscope consists of two tax-deferred IRAs and a joint taxable account. Fees consisted of the expense ratios of the funds, and a management fee that was believed to be 0.5%, which is what it was when they signed on.

Browsing through the 3/4″ thick packet from their most recent biannual meeting, we could see that the management fee (which was 0.5% six years and two companies ago) was now 0.73%. Funny — there was no recollection of that fee increase ever being discussed.

This is what they had in each of the accounts:

Since there was some overlap, altogether they held 48 positions in 28 different funds. Let’s take a look at the details. 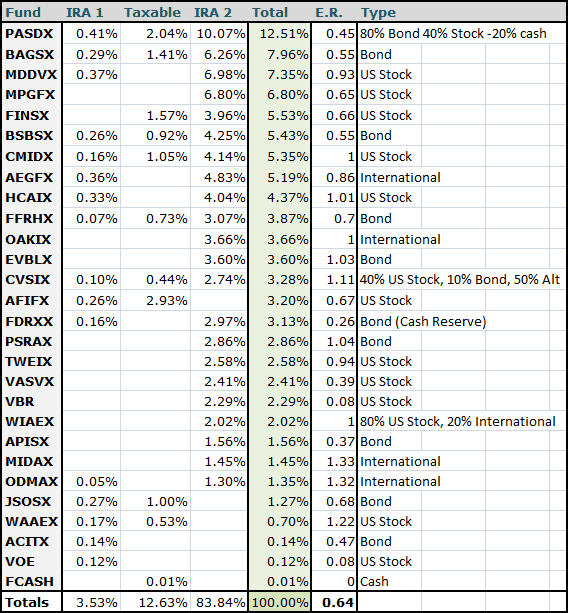 I determined the overall allocation to be roughly 47% US stocks, 14% International stocks, and 39% bonds. I would consider that an appropriate asset allocation for a couple that would expect to live another 15 years based on actuarial tables, but possibly 20 to 30 years based on current health and family history.

I would also consider that to be a really complex and costly way to manage a 60 / 40 portfolio. I showed them my portfolio, and I shared with them these links on the three fund portfolio:

I offered my assistance in making a transition if they were interested, and gave them some time to mull it over.

They didn’t need much time.

When they came back to get the ball rolling, I showed them one more link and told them what I’d been up to in my spare time over the last year. That was a fun “reveal”.

All three existing accounts (two IRAs and a taxable account) were with Fidelity. While I have mine with Vanguard, I had read about the recent lowering of fees in Fidelity’s index funds. Indeed, when I did my own discount double-check, the fees were a hair lower at Fidelity. I also realized the transition would be a bit quicker and uncomplicated by sticking with Fidelity. Furthermore, Fidelity has branches you can walk into, staffed by humans at desks, and you can sit across from them.

We decided to remain with Fidelity.

Our goals were to keep a similar asset allocation, rebalancing to 45% US stocks / 15% International stocks / 40% bonds using these three funds:

Another primary objective was to reduce fees. Based on the existing average expense ratio of 0.64 and a management fee of 0.73%, their current fees were nearly $22,000 per year.

Switching to a three-fund portfolio using passive index funds to arrive at our desired allocation would bring the total annual fees under $1,000 per year, a savings of $21,000 per year. Of course, that $21,000 would be well spent if returns outpaced the indexes by at least 1.5% a year. The odds of that happening, and happening repeatedly, are exceedingly small.

Glancing through the investment performance packet, their portfolio had returned 2.2% over a trailing three year period net of fees. The same paperwork showed the S&P 500 returning 8% over that time frame (although it was actually 8.7% with dividends reinvested). International funds and bonds were relatively flat, but a 45 / 15 /40 mix would have returned between 4% and 5%, which looks pretty good compared to 2.2% (or 3.6% before fees).

We started with a call to Fidelity. The representatives were quite helpful, guiding us through the process of opening new accounts and transferring the money from the managed accounts to the newly created accounts. All of the mutual funds remained the same during the transfer.

Once the funds were in the new accounts, the fun began. I was the token oblivious loud guy on his cell phone you see on television. BUY!  SELL.  SELL!  BUY!  YES!  MORE FSTVX! I was doing it with a mouse and computer, and no one was listening, but I barked out the orders just the same.

In the IRAs, we did not have to consider tax consequences. The taxable account was less straightforward. For better or worse, there were actually a number of funds with capital losses.

It’s worse because we did this with the market at record highs, and most of these funds had been held for some time. I was not expecting to see losers. It’s better because we were able to take some losses to offset the gains, exiting most of the mutual funds with minimal tax consequence.

In the end, we were left with two mutual funds with mostly long-term gains of about $15,000 between the two. To sell would trigger a taxable event to the tune of at least $3,000 due to capital gains and state income tax. They’re not particularly bad funds, and there may be an opportunity to unload them tax-free in the future, so we decided to leave them alone.

That looks like a portfolio that can be managed by a Do-It-Yourselfer. The original portfolio before we tore it apart? That looks like something only a professional should mess with. I think that’s the point. It looks extraordinarily complicated, and it is, but it needn’t be. If it looked a whole lot easier, the professional wouldn’t be necessary.

Armed with a little knowledge and a willingness to stay the course through good times and bad, the individual can do this on his or her own. Of course, the typical investor can underperform the market due to behavioral factors (buying high, bailing low), so there is a role for recommended professionals for those investors who don’t have the knowledge or the fortitude.

The $22,000 in fees previously lost to the advisor and the fund companies represent at least a quarter of this retired couple’s annual spending. For every three or four dollars they spent as retirees, one dollar went to their advisor. And that’s considered normal and acceptable. I don’t like it.

Frankly, I’d be willing to bet the portfolio’s balances could be substantially larger if they hadn’t been nibbled at a little every year while they were growing. Remember, investment fees will cost you millions.

How can 1.4% in fees be so costly? Think of it this way. If you’re planning on the portfolio returning 3% to 5% with a conservative allocation to preserve capital, once you subtract the fees, you’re left with 1.6% to 3.6%. A sustainable withdrawal rate of 4% doesn’t look so safe after awhile.

I’d say we did pretty well.

For further reading on the three fund portfolio, check these out: