It’s Christmas Eve, and although it was a scramble to get our family Christmas newsletter out in time — I wrote this in the car on 12/16 — the USPS should have delivered the paper version of what follows by now.

If you didn’t receive a letter from me in the mail (and you probably didn’t), it’s because I didn’t want any more trees to be sacrificed for the printer paper and envelope or any more greenhouses emitted to deliver those bits of tree around the nation and world. You’re welcome.

Enjoy a slightly modified version of our annual Chrismas letter.

Fake News! An Untrue Update from My Family to Yours.

Dad’s been working so much that we didn’t have a chance to travel at all. If it weren’t for the grueling work schedule, we could have spent most of February in Hawaii. I’ll bet we would had time to visit three islands, take some surfing lessons, and explore the Big Island and its green sand beach before the volcano hit, destroying at least 99.8% of the island from what I recall.

We could have visited Honduras in the spring. If Dad was better at redeeming Aadvantage Miles, we probably could have flown there for free.  And while there, Dad could have spent a busy week giving free medical care to the rare Honduran in need in an otherwise prosperous nation while Mom and the boys helped out around the children’s home known as NPH Honduras where hundreds of disadvantaged children are raised.

Boy 1 found the website of this place on a nearby island called Roatan where you can ride ziplines and get close and personal with monkeys. He and Boy 2 decided they’d never want to go to a place like that.

When summer rolled around, Mullett Lake refused to thaw, so we spent no time at our cabin in northern Michigan. Having sold our shares in the Cheboygan Brewing Company, we could no longer drop in on a random Tuesday afternoon to enjoy a complimentary mug of IPA #11 or Blueberry Cream Ale while gobbling up that delicious popcorn.

Having missed out on the opportunity to visit Honduras, one of the wealthiest nations in the Western Hemisphere, the boys wanted to visit the thriving communist utopia that is Cuba. Apparently there’s a cruise that stops in Key West and Havana, Cuba and of course, we didn’t do that. But if we had, we would have stopped in at Sloppy Joe’s in both cities. Do you think the Cuban sandwiches are any good down there? Guess we’ll never know.

You can tell the boys planned this imaginary Cuban vacation that inexplicably included a week at Disney World as a little pre-cruise side trip. Who goes to the Crappiest place on Earth a week after school starts? Probably almost no one… which means the lines would be minimal… maybe they’re onto something…. perhaps another year. But it wasn’t happening in 2018!

Boy 2 gave up both the piano and ukulele, two instruments he was getting rather adept at playing, in order to focus exclusively on the triangle. Similarly, Boy 1’s piano and guitar playing days are behind him, but he can rub a mean spoon on the washboard. It’s really too bad, because if they had continued with those other instruments, they would have been playing in a cousin’s New Years Eve wedding, the second cousin wedding of the year.

Mom took her lifetime love of the game of tic-tac-toe and dedicated a surprising amount of time to teaching tic-tac-toe tips and tricks to kids in a local homeschooler’s group, the boy scouts, and she even started up a tic-tac-toe club at our boys’ local elementary school. I’m not sure why she chose tic-tac-toe when chess is probably the better game to help children learn more advanced strategies in what can become a lifelong hobby, but who am I to judge?

We’re not sure if Dad will ever recover from the horrific curling accident, a mishap that left him with a nasty concussion, two shattered elbows, and three torn ACLs. It’s a shame he’ll never step foot on the curling ice again, as his team is now in the local Curling Club’s playoffs and seems to be having a really good time and much more success without him.

Due to The Incident, the boys won’t be participating in a weekly Sunday curling club for kids starting in January. Nor will they be in kids’ wrestling; the circular wrestling ring reminds Dad too much of the bulls-eye target at the end of the curling sheet, bringing back those painful memories.

So, like I said in the opening line, 2019 ought to be pretty lame. No curling, no wrestling, no tic-tac-toe clubs, and Dad’s not even considering starting a potentially-permanent sabbatical from his anesthesia gig in the fall.

A more adventurous family would be doing that mission work in Honduras next spring. They’d maybe build a cabin in northern Michigan and hope to move in before next year is through. But not this family. 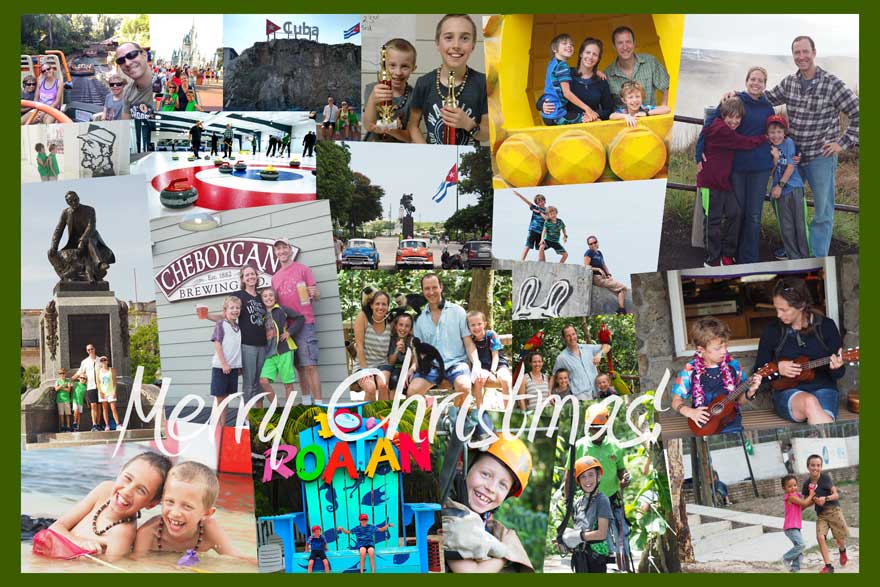 Cheers to a happy,  healthy, and not-so-lame  2019 to you and yours! Happy Holidays!

6 thoughts on “Merry Christmas from My Family to Yours! Our Fake News Christmas Newsletter”