Having recently spent nine days away from home at not one, but two mega-conferences, I was happy to be home and eager to wake up last Monday morning to get my boys ready and off to school. It’s not often I look forward to a Monday morning, but after a long stretch away like that, I start to feel disconnected from my normal life.

My wife joined me at FinCon, which was awesome, but our boys are such a huge part of our lives that I feel off-center without them. We’re planning to bring them with us for next year’s blogging conference in Orlando. I hear there are fun things to do in Orlando.

I would not encourage couples to use finances as a top factor when considering starting a family — that’s a question with many facets (as evidenced by this forum thread on the topic), and money is a small piece of that puzzle.

Still, I think it’s a worthwhile exercise to evaluate what the effect of procreation on eventual financial independence might actually be. After all, kids aren’t free. Far from it.

The Department of Agriculture releases annual data on the cost of raising a child to age 18. The most recent estimate of that cost was a whopping $233,610 in 2015 dollars. For the full breakdown, see the 2017 report from the Department of Agriculture. Our friend Vagabond MD, in his guest post Kids are Dynamite For Your Early Retirement, suggested they might cost even more than that for some.

Of course, the cost of raising children is largely up to you, but there are no free kids. Conception might have cost you the price tag of a Yankee candle and bottle of Two-Buck Chuck, but the delivery costs a whole lot more. After that, you can expect to pay for a host of additional expenses, including but not limited to:

There are many things you can choose to do to keep these expenses in check, but you will be spending money on these kids every single day for at least eighteen years. It’s just a fact of parenthood.

How Much Money Can Raising Children Cost?

I also think it’s fair to consider the fact that you’ll spend a bit more on the first child, and subsequent children will cost a bit less thanks to hand-me-downs, sharing of toys, bikes, etc…

On the low end, for the frugal family, we’ll say raising the first child costs you an average of $5,000 a year, and additional children cost $4,000 apiece. When you consider all the additional expenses above, and the fact that this is less than half the Dept of Ag’s estimate, this will require many frugal choices.

Our upper middle class child-rearing expenses will approximate the Department of Agriculture estimate at $12,978 per year (rounded to $13,000), and her younger siblings’ expenses will be $10,000 per year.

Our upper crust children spend most of their 18 years in private schools. This substantially raises the cost of raising children to an average of $30,000 per year for the first little guy. Hand-me-downs are not happening, and each child has their own room, so his brothers and sisters will have equal expenses.

Our friends at the Depatment of Agriculture have put together a calculator to assist you in determing the cost to you based on the number and age of your children, the number of parents, the region in which you live, and your annual income. You can even enter your kids’ names, although I don’t think that’s going to change the numbers.

Here are my results:

The calculator says I can expect to spend about $39,000 on the two boys this year. Considering we’re on pace to spend around $55,000 as a family in 2017, the wife and I must be relative bargains!

Adding Up The Costs to Raise The Kids

To keep these calculations relatively simple, we’ll use a constant cost that doesn’t vary year to year. In reality, babies, toddlers, and teenagers will have different needs than a grade-schooler, but we’re using an average cost.

We also have to consider the fact that there is an opportunity cost to money spent in the first few years of life compared to the sum we drop on the high school graduation parties. The $300 you spent on a crib could have been left invested. Using the rule of 72, we can quickly deduce that with an 8% return, that $300 would have doubled twice by the age of 18 to $1200.

What about inflation? As I’ve done in the Four Physicians series, we’ll use real (inflation-adjusted) returns to calculate the opportunity cost of the money we spend raising our children. We’ll calculate the cost of having up to four children. Yes, some people raise five or more (I see you, Ms. Montana), but when the family gets to be that large, you’ve probably figured out some economies of scale to reduce the impact of the fifth, seventh, or thirteenth child. 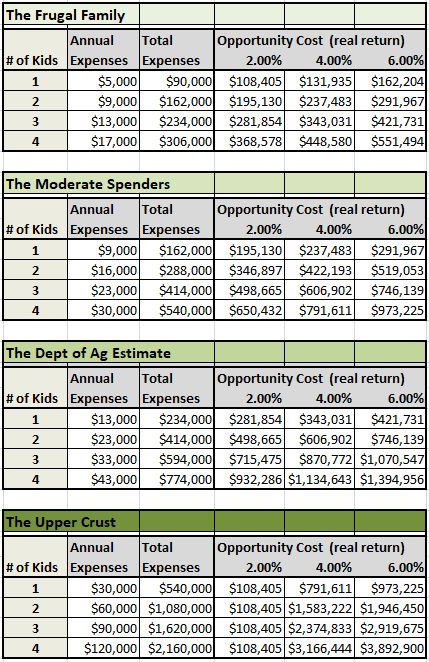 I can hear the grumbles already. You don’t like my numbers or assumptions. Your third child was a girl joining two boys, and now you’re buying outfits for an American Girl doll that cost more than the outfits for your actual American girl. Or your four kids sleep on two bunkbeds in one room and your family doesn’t do birthday parties.

I’m well aware of the problem with assumptions, so I’ll let you  enter your own numbers (or best guesses) into the embedded spreadsheet below. Of course, these numbers are not meant to be precise; they exist to give us a rough idea.

If you’d like to download this, along with about ten other calculators I’ve built, they’re available to subscribers in the form of an Excel file. Sign up, download, and if you don’t want to hear from me again, you can unsubscribe right away. No hard feelings.

The Impact of Raising Children on Financial Independence

Now that we’ve estimated that you’ll be trailing your childless selves from a parallel universe by something in the range of a little over $100,000 to a little under $3.9 Million, we can better understand what that means for eventual financial independence.

Once again, several variables are at play. The most important are the opportunity cost of having children based on the table above, and your ability to earn and save money to cover that cost.

We’ve been down this path before, and as I often do when faced with a question like this, I constructed a spreadsheet to give us the answer. A few tweaks to the Time to FI Calculator  gives us the Added Time for FI Calculator. Enter your monthly savings, the additional money anticipated to raise kids from the “opportunity cost” colums above to determine how many additional years it will take to achieve FI.

Today, we’ll use it to calculate the additional time required to cover the costs of raising children, but it can just as easily be used to calculate how much more work is required to cover any expense with a fixed or time-limited cost. Ongoing costs are pretty easy to calculate, too. Simply increase your desired annual spending by the anticipated cost of your season tickets, club membership, or first-class upgrades and you’ll get the answer you’re looking for from the Time to FI calculator.

To get a better idea of how much time will be added for a variety of families, we’ll look at a few examples: 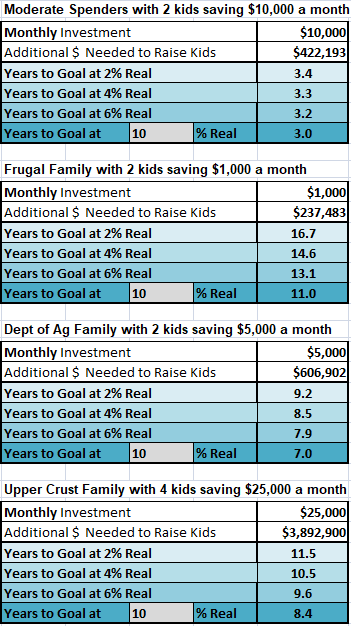 The first family is not aypical of a high-income professional family pursuing financial indepence. They’re “supersaving” $10,000 a month, spending moderately, and having a couple kids adds a few years to their financial independence date.

The next family is a middle class family raising kids as frugally as possible, with expenditures far below the Dept of Ag’s estimates while saving $1,000 a month. The kids change their time to FI by 11 to 17 years!

The third family might be a normal upper income household, spending in line with the Dept of Ag’s estimated cost to raise their two kids. Saving $60,000 a year, it will take them an extra 7 to 9 years to become FI.

Finally, the big spenders, who utilize private schools for all four children need nearly $4 million to cover the cost of those expensive kiddos! Fortunately, they earn plenty of money. By setting aside $25,000 a month, they will recoup that cost in 8 to 11 years.

The financial implications of having children should not be the deciding factor when you decide whether or not to attempt to start or grow a family. Other factors should carry much greater weight. I know I explained that in the introduction, but I cannot stress it enough.

Despite the challenges, we would make the same choice to have children again. If they cost double or triple, I’d be willing to put in the extra time to afford them.

These exercises are my attempt to give us a better understanding of the monetary challenges of pursuing financial independence while raising a family. FI looks entirely different to people with different habits, goals, and family structures.

The single, childless traveling nomad’s total needs might be met with less than $500,000. An upper crust family can require about eight times that sum just to launch a family of four. Achieving financial independence might take another $5 Million. Most of us will make choices that put us somewhere in between these relative extremes.

For me, using the calculators above, I’ve guesstimated that with two boys, I put in about two extra years of full time work to cover the cost of raising our children as moderate spenders.

Note that while that isn’t very long at all in the grand scheme of things, the time would be much longer for someone who doesn’t earn a specialist physician’s pay while saving about three-fourths of take-home pay. For someone saving and investing a few thousand dollars a month, a couple kids could easily delay FI by a good ten years or more.

Also, keep in mind that having children can be an incredible motivator to reach FI sooner. As you watch them grow like weeds as time flies by, you may be desperate to find a way to make life slow down before they’re up and gone.

Financial independence gives you the freedom to do that.

Do you have children? How many? Do you spend as much as the Dept of Ag says you will? Do your children factor into your future plans after reaching financial independence?

82 thoughts on “Financial Independence With Kids: How Procreation Impacts FIRE”