Dr. James Turner believes he has discovered the real secret to financial success, and I think he may be on to something.

Is it how early you start investing? Or is it the investments you make that matter the most?

Does mastering the backdoor Roth, tax loss harvesting, and maxing out every single penny of tax-advantaged space available to you guarantee financial success?

Maybe it has something to do with real estate. You know, if Peter Kim had written this, it most certainly would.

The answer, says Dr. Turner, is simpler than any of that. This post was originally published by The Physician Philosopher. 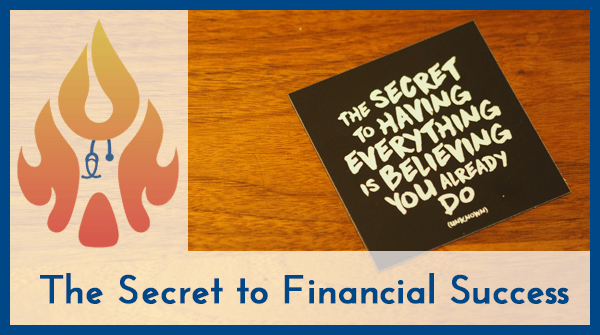 The Real Secret To Financial Success

Odds are that most people we work with do not understand what half of these words mean, though if you are reading this blog I hope that’s not true!

Regardless of how complicated we make this stuff, financial success boils down to just one solitary concept: Contentment. Now, don’t scroll to the top and leave this post.  Hear me out.  It’ll be worth your time.

After all, I am the Physician Philosopher.  Philosophical principles can teach us a lot – even in personal finance.

To become financially independent, two things must happen.  We must live on substantially less than we earn, and we must invest the difference (hopefully through a passive index fund model that helps you keep investing simple).

Those that do not save enough money often fail for many reasons, but the most common – at least for medical professionals – is that we have a spending problem.  Doctors certainly make enough money to save some of it!

Are You A Slave to Debt?

Imagine that we are all runners in the same race.  Except this race isn’t fair. Some wear weighted metal balls chained to their ankles of various sizes.  The more enslaved we are, the heavier the weight.

Some have cut themselves free from their weights after repaying their debt to earn their freedom.

At the gun shot, we all must run the distance set before us.  Bang!

Naturally, those that are free run the fastest and finish the race quickly. The next group are those with small weights that limit their movement, but do not prohibit it. At the starting line, some are never moved an inch because the weights are insurmountable – holding them in place.

In fact, despite our effort, these financial weights are so heavy that it often feels like we are running in place. Some refer to this as the hedonic treadmill – the faster you run, the more tired you get without actually going anywhere.  You are stuck on the treadmill.

In order to make real progress, we need to cut the weights off and sidestep the treadmill.  Then, we can finally land on solid ground where steps mean progress.

What Makes You Happy?

The problem with all of this is that those weights that weigh us down were often purchased in order to make us happy.  We didn’t mean for our “dream home” to trap us into our lifestyle.  Or maybe for you, it is the private schooling for the kids, a fast car, or designer clothes.

Either way, these things are often purchased to produce happiness.  We make a lot of money, and that money is meant to make us happy, right?

The truth is that more money does not always equate with increased long term satisfaciton.  A higher salary might actually make people happier to some extent, but after some number (between $75,000-$105,000) happiness does not continue to improve.

Hopefully, the irony is not lost on you that purchasing “things” usually sends us in the opposite direction of financial independence – increasing the weight of the metal balls that ensnare us through debt.

At the very least, they keep us stuck in place on the hedonic treadmill.

Truthfully, we must realize that money is not the real object.  Ultimately, we are trying to earn and save enough to be able to spend our days how we choose.  This is the ultimate form of freedom.  It’s the kind of freedom that led my Hell Yes Policy where I now no longer say yes to anything that doesn’t make me say, “Hell Yes!”  Everything else I’m asked to do?  I simply say no.

Of course, this is a waste if we never figure out what makes us happy.

Now, we try to avoid buying things that are meant to make us content and yet prove to provide the exact opposite – weighted metal shackles.

The place where I have found this to be the most true is in purchasing the “attending house” after finishing training (though, it also applies to expensive cars and private school educations).

People are often surprised (shocked maybe?) when the house we lived in for the first two years as an attending physician. It was a quaint 1100 square foot house filled with five humans and two dogs.

The carpets didn’t match, but our house was full of love, laughter, and passion.

People often point out that “most people wouldn’t be happy living in the same house they lived in as a resident” once they become an attending.  To these people, I’d say five words:  You are missing the point.

A House is a House

The point is that we didn’t need the next house.  It was a want.  We were content where we were, and waited until our $200,000 in student loans were paid off to buy our current house.

While our new house is much nicer, and provides a lot more room… it’s still just a house.  Just like our 1,100 “quaint” home, it has a front door, a yard for the dogs, a bed to lay our heads on, and a kitchen that is full of food.  The shower even makes hot water, and the toilets flush.  What else do we need?

Contentment is what allowed us to delay future purchases that guarantee our loss in the personal finance race.

That doesn’t mean that we never looked forward to the next house.  It simply means that we were content with what we had while we paid down our debt in anticipation of taking the next step.

So, when you find yourself in a time of transition (undergrad to medical school; medical school to residency; residency to practice)… just remember the art of contentment.  Oh, and remember The 10% Rule, too.  That’s what helped us find the balance in all of this.

Many Christians love quoting Philippians 4:13 – “I can do all things through Christ who strengthens me.” What they often miss is the wisdom presented by Paul in the preceding verses.

Christian or not, this is pure gold:

11 Not that I am speaking of being in need, for I have learned in whatever situation I am to be content. 12 I know how to be brought low, and I know how to abound. In any and every circumstance, I have learned the secret of facing plenty and hunger, abundance and need.

After all, it’s not the stuff itself that makes you poor. It’s the discontentment with your possessions that possesses you.

Learn to be happy, and let enough be enough.  That’s how you become wealthy in this world and the next.  It’s also how you’ll learn to win the personal finance race.

Have you ever experienced true contentment?  Or are you always wanting more to try and find that happiness that has alluded you?

1 thought on “The Real Secret To Financial Success”