Outside of the medical field, much of the workforce has experienced a radical change in their professional lives since the beginning of the pandemic. Those in the medical field may have experienced burnout like never before, making financial independence a more urgent goal.

Many worked from home for the first time. Others had extended downtime. Some lost a job and found another. There are those who got a taste for what early retirement might actually feel like. Many stopped commuting.

He was kind enough to provide us with a written bio in addition to the piece below:

Lyle Solomon has considerable litigation experience as well as substantial hands-on knowledge and expertise in legal analysis and writing. He graduated from the University of the Pacific’s McGeorge School of Law and now serves as a principal attorney for the Oak View Law Group. 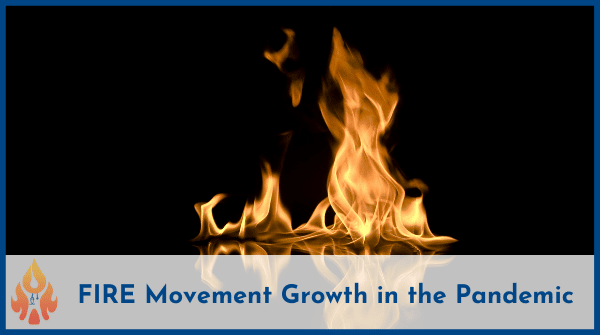 Some may feel the pandemic greatly affected the FI and RE portions of the FIRE movement meaning financial independence and retiring early. Due to financial setbacks, some people may have had to push back their estimated time of retirement. Then, there are others who flourished and could expect to retire sooner than expected.

Overall, the financial effects caused by the pandemic varied for many people whether they were in the lower, middle, or upper class. However, no matter what a person’s outcomes were, the FIRE movement remains an excellent way of preparing for retirement much sooner than the norm.

Many of the financial habits behind the FIRE movement became more urgent to people during the pandemic. Those who were not previously preparing for early retirement are learning at a young age what they might be able to do differently to get there. Here are a few of those habits and how the pandemic has influenced them.

The FIRE movement already promotes living a more frugal lifestyle so that funds can go towards savings, investments, and being debt-free. Cutting back on monthly and day-to-day expenses are often necessary sacrifices to use money more wisely.

Going through the pandemic and experiencing financial hardship to some degree only influences a frugal lifestyle even more. In this time period, many have learned the importance of cutting back on expenses, especially when many are experiencing a decrease in income.

Not being financially prepared in times of uncertainty can disrupt one’s financial path and current circumstances, and it took the pandemic to happen for many to reach this conclusion. In addition, there have been higher increases in inflation, rising living costs, and rising food costs that further influence adopting good spending habits and budgets.

Creating investments with long-term benefits is what the FIRE movement supports. However, the pandemic’s economic effects made some people review their investment portfolios with a renewed interest.

Some industries saw major declines, while other companies had skyrocketing sales from offering products or services that experienced a much higher demand. Investors may have sold some positions while also acquiring new ones.

Some people felt the need to diversify their investment portfolio during the pandemic, which could further along their road to early retirement. Current investments that have gained traction even during the pandemic have turned the interest of many to earn more passive income. NFTs, cryptocurrency, artificial intelligence (AI) stocks, and many others have experienced a rapidly growing amount of investors since the pandemic and even before.

For those who had little to no financial strain during the pandemic, they simply reinvested profits and dividend income when they diversified their portfolio. Reinvesting has been another strategy influenced by the FIRE movement that the pandemic did not change as it is a sure way to help people retire early.

Having the goal of being debt-free is all but necessary to be financially independent and retire early. For those who could pay off some debt during the pandemic, it was a sure way to not only build wealth and savings but also reduce monthly expenses.

Payment programs during the pandemic that offered deferred or forbearance payments were definitely utilized by those experiencing financial difficulty. For some, the thought of debt consolidation was necessary to stay afloat.

To further explain, some people who were able to pay off some open balances allowed for less of a financial risk for months to years ahead. The pandemic has gone on for well over 18 months. While many would like to think the pandemic is coming to an end soon with vaccinations and herd immunity, it will be some time before this disease lessens its grip on our society.

Let’s say someone used the first stimulus check they received to pay off credit cards. Months later, their work hours decreased or their job closed and they collected unemployment. The paid-off credit cards are more helpful to the situation, as it makes monthly bills lower than before.

Even though there is a temporary pause on student loan payments with no accumulating interest, some have taken advantage of this time to make payments on student loans. With interest rates on certain loans currently at 0%, it has been a good way to pay down the principal amount and consolidate school debt.

The rent moratorium has allowed some people to go months or even over a year without paying rent. However, the balance that some have ended up with afterward is more than difficult to pay, resulting in processing evictions and terminated leases.

Outcomes of the rent moratorium are clear that putting off payments when you are capable of some payment could not be the best idea financially. If you have the means to consolidate debt, even by a little, it’s worth doing.

As time goes on, how people build their income changes as ind-demand fields tend to become more lucrative. As stated before, the FIRE movement works best for those who have substantial income or enough income to live off of only half their income or less.

Therefore, people looking to follow the FIRE movement tend to find ways to earn income that have the ability to cause positive life changes. The pandemic showed many that one job may not be financially secure enough for them and their families. People wanted to break from the workforce, and exploring new methods to earn income or build passive income influenced a Great Resignation during the pandemic.

Some started businesses that have great growth potential, removing the cap on how much money they could bring home. Millions entered the gig economy seeking the ability to work on their time and the flexibility to continue working from home.

Other methods for building income that have become popular would be cryptocurrency, NFTs, affiliate marketing, digital products, some form of real estate investing, and many others. If you aren’t receiving adequate income to invest in the road to early retirement then find what methods of earning income are for you.

The FIRE Movement is Here to Stay

The pandemic could not break the principles of the FIRE movement. The process of consolidating debt, eliminating debt, short and long-term investing, and the possibility of retiring early was never compromised by the financial pitfalls the virus has caused.

As mentioned before, those who were financially prepared for the economic effects of the pandemic may have experienced no retirement delay whatsoever.

The power principles behind the FIRE movement will remain evident throughout any economic downturn as they will always be methods that contribute to the ability to retire early.

Did the pandemic make you more interested in FIRE? What changes have you made to make that goal a more likely reality?