It’s not a suggestion or a recommendation. It’s a challenge. If you can find a way to meet this savings challenge, you will be rewarded handsomely.

How so? Living on half of your take-home pay, or to put it another way, saving and investing as much as you spend, should lead to financial independence (FI) in roughly 15 to 20 years.

You can live the rest of your life on your own terms. That’s a reward that I feel makes certain sacrifices well worth it.

What kind of a sacrifice are we talking about? I’m so glad I asked! Altering the hypothetical physician’s budgets from a previous post on specialty choice, we can derive an annual spending budget for each of these four physicians with household incomes of $200,000, $300,000, $400,000, and $500,000 by giving them a 50% net savings rate. [Calculate your savings rate here]

The Live on Half Challenge 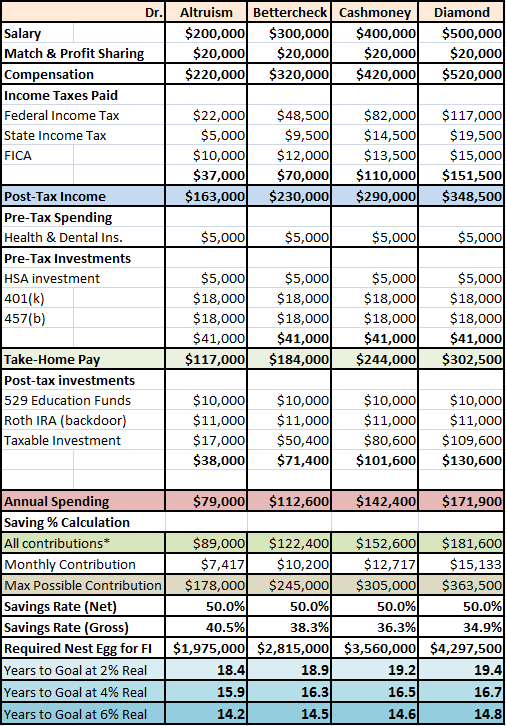 With a 50% net savings rate, representing 35% to 40% gross savings rates, these physicians are indeed financially independent in 14 to 19 years with a realistic range of real (inflation adjusted) returns from 2% to 6%.

On the lowest end of the spectrum, our physician families were spending $79,000 a year on a $200,000 salary, requiring just under $2 million to be financially independent, with 25 years of expenses saved after 14 to 18 years.

The biggest income producers were able to spend $171,900 every year, and would have their coveted FI status of $4.3 million in approximately 15 to 19 years.

The 7 to 12 month discrepancy can be explained by the fact the $10,000 529 contributions, which do not count towards retirement savings, become relatively smaller on a percentage basis as income increases, allowing slightly more spending as a percentage of take-home pay. I don’t want you to miss the forest for the trees, but I thought that was a point worth mentioning. I know my astute readers would call me out in the comments; it wouldn’t be the first time.

What other assumptions have I made? Besides the dumb one about my 401(k) vesting schedule? In order to make tax and net worth calculations, we must start with assumptions.

Each of these physicians is married with two children, filing jointly. We start keeping track when they have a net worth of zero, which is very likely at least a couple years after residency for most. They live in a middle-of-the road income tax state, and the stated income is total household income.

The Live On Half Challenge for Physicians

I frequently refer to the benefits of being FI, and all of them can be yours if you accept the challenge and earn a solid living for fewer than two decades.

Our family of four manages to live quite well over the last year on less than $79,000. If we had a mortgage, our budget might have looked more like that of Dr. B. That’s OK. My in-demand specialty, along with a little geographic arbitrage makes me a Dr. C in terms of earning power. We also get much of our travel for next to nothing using clever travel rewards strategies.

I’ve written about what it means to be a frugal physician, which is what you will need to be if you are a Dr. A with a household income of $200,000. To keep your budget in check, focus on the big stuff. Your home. Your cars. Private schools. Second homes. Second wives.

What About My Debt?!?

I’ll do you a solid. I called it the “Live on Half” challenge, not the “Save Half” challenge for a reason. You can spend half your paychecks, and we won’t count debt payments as spending. As long as the other half of that check is being used to retire debts, it’s being put to good use.

Consequentially, it might take you a bit longer to hit your FI target compared to the four featured physicians, but their stories started with a zero net worth. If you’re in the red, you’ll need a little time to dig out. That’s fine; take as much time as you need. As long as you’re Living on Half.

Can you rise to the challenge? If so, tell me about it. If not, what’s holding you back?

61 thoughts on “The Live on Half Challenge”