Today, we have an insightful guest post from a frequent contributor here on both physicianonfire.com and on the White Coat Investor Forum. You may recognize him as Vagabond MD, a radiologist who you may know from his appearance on the WCI Podcast.

He writes about his first bear market, which occurred just after the turn of the millennium. At the time, I was a medical student and was minimally invested in an IRA and not paying a whole lot of attention, and certainly not adding to my investments. I was only adding to my student loan balances.

However, I did finish my training in 2006, ten years after Vagabond MD, and experienced my first big bear market a couple of years later. It was unnerving to see the value of my early SEP-IRA investments plummet, but I managed to stay the course while also dumping money into building a home (which also turned out to be a rotten idea when we did so in 2007).

For the younger docs, especially those who have not (yet) suffered through a bear market (at least at the time of my writing this), I thought I would take myself back to the 2000-2002 bear market and how I felt when the stock market was seemingly crashing all around me.

For the backdrop, the mid-to-late 1990’s were quite a bit like most of the 2010’s. I am not talking about the internet stock-driven “irrational exuberance” of the late 90’s, but the steady upward trend in tech stocks and blue chip stocks that occurred as I was finishing training and starting my real job in 1996.

Now that I was earning real doctor money, I felt urgent pressure (bordering on obsession) to get my money into the stock market ASAP or I would surely miss out on the elixir that was making everyone else around me fabulously wealthy.

You could not walk into the hallowed Doctor’s Lounge without hearing about colleagues’ great skill at buying tech darlings and the huge profits that were piling up. There were, for sure, a few short-lived drawdowns (Long Term Capital, the so-called “Asian Contagion”, etc… but nothing major. And the market seemed to always snap back.

And then, rather suddenly, it didn’t. 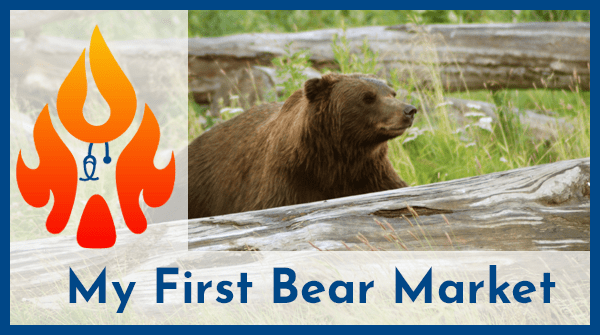 The tech bubble peaked in March of 2000, and burst, followed 18 months later by 9/11, bringing down the largest, most heavily invested segments of the US stock market.

There were some niche exceptions. I caught the small/value bug early and invested in this space via actively managed funds (Oakmark and Third Avenue Funds), and there were a few other small pockets of resilience in my portfolio (bonds and international stocks).

Alas, my portfolio, like those of just about everyone else, was overweight in the large cap and tech stalwarts of the 90’s and was crushed. Thank you, Cisco!

As the two year bear market dragged on, it became disheartening to see the value of my portfolio tanking, even with regular retirement fund contributions and additions to a taxable account.

Our retirement fund allocations were via a Profit Sharing Plan, and we received our allocations quarterly. I would get a $12,000 or so allocation in the beginning of March, and by the end of March, my portfolio would be down $15k, $25k or more, despite the recent additions (which is quite the opposite of what we had been experiencing then or more recently).

It felt like I was throwing money into a black hole. I did not capitulate and sell out of equities, but I did shift things around a bit, to better diversify my portfolio. Eventually, my interest in feeding the bear market beast was wavering.

Investing in Fun Instead

At some point, I started diverting more funds into consumptions (vacations, hobbies, home remodeling, etc.). I remember when asked by a senior partner what I was going to do with a semi-annual bonus check in 2002, I told him that I was going to “invest in fun.”

For our anniversary, we bought each other expensive watches, something I probably would not do today. There was a pervasive feeling inside that this bear market thing was endless, so you might as well enjoy the fruits of your labor today. It might be a rationalization, but I think allowing myself to loosen the purse strings a bit, swung the pendulum toward a better balance point, easing the tension between saving/investing and spending.

But I did continue to invest retirement contributions and some taxable income primarily into stock mutual funds. I was probably in the 75:25 (stock:bond) ratio, +/- 10%, throughout the 2000’s.

Without warning or much fanfare, the declining market turned up. It’s true that nobody rings the bell at the bottom. I have no recollection of the transition back to the bull market, when I recognized it, or how I felt, but it seemed like I woke up one day, and we were no longer steadily hemorrhaging money on paper.

Though the number on the monthly statements was getting larger, there was no rebound euphoria. An upward trending market was expected, almost an entitlement, while a down market was abnormal, an aberration, even painful.

You learn quite a bit about your investing self in a bear market, and I know that I handled the even-more-disastrous 2008 considerably better as a result of my previous experience.

1. Do a better job with diversification. I made sure that I was distributing my stock exposure more evenly throughout the Morningstar large-mid-small and growth-blend-value boxes. I made sure that I had a decent allocation to international stocks and REITs, and I reupped on my commitment to fixed income.

2. In down stock market periods, check your balances and statements less often. Avoidance of unactionable, negative news is good for the psyche (and this trick works well outside personal finance, too).

3. Live life along the way, and if you have a doctor salary, there is probably plenty of fun stuff to do with it. Vacation, hobbies, occasionally luxury splurges (ie. “Selective extravagance”), etc. No use having the biggest, largest portfolio in the graveyard, especially if you did not live a little while you were alive.

4. There is much bravado in saying “bring on the bear market, so I can buy stocks on sale.” But when it actually happened, and persisted for a while, I recognized that I had become attached (even anchored) to a high paper net worth. As I slid further away from my Number, despite regular contributions, it caused me no small amount of distress.

5. Cash is not trash—at least for me. Keeping a healthy amount of money super liquid and immune to market perturbations allows me to worry less. As per the concept of Marginal Utility of Wealth (losing a little money hurts me more than earning a little more buoys me).

In Fred Schwed, Jr.’s investment classic book from 1940, “Where are the Customers’ Yachts,” he writes:

“Like all of life’s rich emotional experiences, the full flavor of losing important money cannot be conveyed by literature. You can not convey to an inexperienced girl what it is truly like to be a wife and a mother. There are certain things that cannot be adequately explained to a virgin by words or pictures.”

I did my best with words (if not pictures) to describe my emotions and actions as I experienced my first bear market. I hope reading of some of my mistakes and maneuvers can allow others to sail more smoothly when the next bear market comes roaring.

[PoF: Thank you, Vagabond MD for sharing your insights once again. When that next bear market comes roaring in, we’ll be better prepared. Cheers!]

To read more from the prolific guest author, Vagabond MD, see all of his articles:

What do you remember most about your first bear market? Did you “stay the course,” invest in fun, sell low, or buy up bargains? Let us know in the comment box below!

42 thoughts on “My First Bear Market”