A “glide path” describes how your asset allocation is expected to change over time. The traditional sentiment is that the percentage allocated to stocks should decrease as you approach and enter retirement.

That’s the approach taken by Target Date Funds and traditional financial planning. Does that make sense for you?

William Bernstein, MD is often quoted and paraphrased, having stated that you ought to stop playing once you’ve won the game. In other words, once your financially independent and beyond, why invest substantially in potentially risky assets like stocks?

However, and he said it himself at WCICon18, if you’ve won the game 2 or 4 times over, having a withdrawal rate of 1% or 2%, you can live with that volatility and be invested in 100% stocks with little risk. The biggest risk then is that you may have an estate tax “problem” if you don’t start spending more or giving it away.

That sentiment aligns well with my risk preference. I’d just as soon have enough money in my portfolio to remain invested aggressively with a reverse glidepath as Big ERN discusses in his SWR series. If I might live another 50 or 60 years, that’s a long time to have money on the sidelines playing it safe.

Let’s see what Dr. Jim Dahle has to say about allocation glide paths. This post was written by him and originally published at The White Coat Investor.

How to Design Your Personal Retirement Glide Path

In investing, a “glide path” describes how and when a portfolio gradually becomes less risky as you move toward retirement. The concept is perhaps best known with regards to Target Retirement and Lifecycle funds where you pick the “Fund of Funds” by the date of retirement. The mutual fund company has its experts decide on what the ideal glide path should be and then implements it as your retirement date approaches.

Graphing the asset allocation of the Vanguard Target Retirement Funds gives you an idea of what a “typical” glide path might look like, but there are significant differences between the various mutual fund companies, as discussed here. 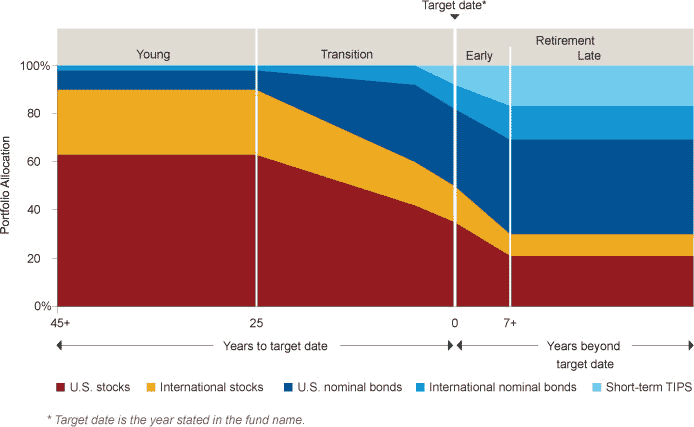 There are a few things worth pointing out there.

A Glide Path Is Not Investing Doctrine

However, the concept of a glide path is hardly investment gospel. There isn’t much data that suggests you should be following a glide path at all. The whole concept really comes from rules of thumb, like “hold your age in bonds” popularized by people like Jack Bogle. In this post, I’d like to point out a lot of other ways to do it, and explain their merits over a more traditional glide path.

#1 Decrease Your Stocks By Age

#2 Decrease Your Stocks by Time to Retirement

So perhaps the asset allocation should be determined not by your age, but by how far you are from retirement. So someone who is ten years out from retirement will have the same portfolio, whether they are 40 or 60. This is essentially how most Target Retirement/LifeCycle funds work.

#3 Decrease Stocks By Percent of “Enough”

However, why should time be an important factor at all? I mean, the real way to determine an asset allocation depends on your need, ability, and willingness to take risk. Someone who has almost enough to be financially independent has a whole lot less need to take risk than someone who only has 1/4 of their “number.” For example, perhaps the glide path looks like this:

#4 Why Decrease Stocks At All?

Perhaps the whole dogma that you should take less risk as you go along is wrong. Perhaps it is reasonable to hold the same asset allocation your entire life. You determined early on what you could tolerate as far as volatility and you just stuck with it.

Lots of people argue that your portfolio should just be 100% stock anyway except for money you need in the near future. I never hear real estate investors talking about needing to maintain a balance between equity real estate investments and hard money lending. Maybe the whole concept is wrong.

#5 Why Not Get MORE Aggressive?

In fact, there is a halfway decent argument that you can get more aggressive as you go along. You have gotten used to the volatility of your portfolio, and so each succeeding bear market bothers you less and less. In addition, you have more and more resources as you go along, so even if you lose a big chunk of them, you still have more than you used to.

Wade Pfau has argued that while you should have a relatively conservative portfolio around the time of retirement (a few years before and after) to reduce sequence of returns risk, you actually have a better chance of not running out of money in retirement by INCREASING your stock percentage throughout retirement.

Perhaps the best glide path is some combination–low risk early on when you don’t have much, increasing risk throughout your 30s and 40s as you need your money to grow, then decreasing towards 60 to reduce sequence of returns risk, and then increasing again in retirement.

#6 Why A Smooth Transition?

In fact, as long as we’re questioning investing doctrine, why have a smooth glide path? Why not just make big wholesale changes from time to time? Perhaps you can stay 75/25 from age 25 to age 55, then go to 50/50 all at once. And why make your changes dependent on age, time to retirement, or even a ratio of your assets to your “number”?

Maybe the changes should be dependent on market valuations. Doesn’t it seem smarter to reduce your risk five or six years into a bull market than one year into a bear? Obviously, this isn’t much different from timing the market with all the risk that entails.

#7 The Effect of Debt Reduction

While we’re on the subject of glide paths and asset allocation, let’s take a moment to discuss how debt reduction affects your true asset allocation. In reality, your debts like mortgages and student loans are negative bonds.

So as you pay down debt throughout your life, your portfolio NATURALLY becomes less aggressive, even if you maintain the same asset allocation over time. Do you really need to decrease it further?

What Should You Do?

There are obviously many ways to skin a cat, and I have no idea what the right glide path is for you or anyone else. I can tell you what we’ve done since we started investing halfway through residency–nothing. We set a 75/25 portfolio then and we basically still have it.

Whether that is right or wrong, I have no idea. And that’s the point. Nobody knows. There is no right way to do this. Like with asset allocation, pick something reasonable and stick with it. In fact, this is a great thing to incorporate into your written Investing Policy Statement, but I confess we do not even address it in ours.

I’m pretty partial to the idea of reducing risk depending on ratios of how much you have to how much you need. Like rebalancing, that forces you to sell high and buy low and to naturally take less risk as your need to take risk falls.

I’m also a bit partial to making bigger changes to your ratio from time to time, rather than a tiny change every year. I also like the idea of making changes that reduce your stock to bond ratio at some point in the investing cycle other than right after you experience big losses in stocks.

Remember that there is little benefit to a perfectly finely tuned asset allocation. It just doesn’t matter THAT much, especially when compared to other things like your income, savings rate, and ability to stay the course.

What do you think? Do you have a glide path? How is it determined? Which of these “glide path” ideas are you partial to? Why do you think the classic glide path has become such a prominent investment dogma? Comment below!

9 thoughts on “How to Design Your Personal Retirement Glide Path”