And it’s very probably true that providing a spark of interest, and perhaps a little targeted guidance, to your teen about investing and personal finance can set a remarkable stage for their future growth and wealth.

But who better to talk about teaching teens about investing than a teen?

In today’s guest post, we will hear from a member of the next generation about investing – and how to reach that cohort and impart upon them the crucial fundamentals of building wealth. 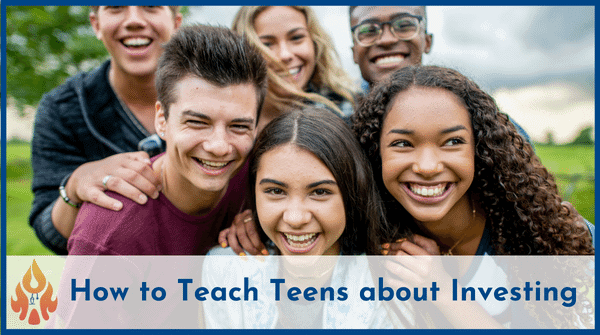 My name is Jack Rosenthal, and I’m the 20-year-old author of the #2 best-selling book on teenage investing. As a (recent) teenager myself and one of the top teachers to teens on the subject of investing I thought I would be well-positioned to write a blog post on this topic. I grew my portfolio from $5,000 at 8 years old to $250,000 by the time I was 19 through a combination of investment returns and entrepreneurship. I’m going to try and gear this article toward physician parents but it’s really relevant to all parents.

Teach Your Kids How Money Works

First, start getting familiar with money early on. Although the amounts change over time, the fundamental nature of how money works stays the same. Take for example when a child is 10. Earning or spending $20 may seem like a lot at this point based on how much they may have saved up (likely very little). This same fundamental rule of relative amounts applies as a child gets older, just with larger numbers.

In my opinion, it’s important for children to be around money early and to earn and have their own money so they understand how it works. Rather than parents just buying gifts for their children I would suggest giving their children shares of stock or money so they can make the decision of how to use their money on their own. Being responsible for money at an early age allows children to learn about money management early. They’ll quickly learn that if they spend more than they have, their savings will quickly run out (a lesson many adults still don’t know).

Although giving a child money rather than a gift might not sound like the most elegant thing to do and obviously you wouldn’t just hand a friend money at a birthday party, the purpose of this for a child is different. Often gifts and perhaps an allowance is a child’s only source of income. By being responsible for their own money early on, a parent can observe their child’s money decisions and help advise them on strategies that will be right for them later on in life, plus it’s likely the child will learn good money habits on their own.

I started my own investment portfolio with a $5,000 one-time gift from my grandfather. He showed me how to invest and showed me the investment strategy he used. He explained you can play the market and pick stocks, but most of the time you’ll get it wrong. Most of the time you’ll be better off if you just invest in the market (the S&P 500) which is exactly what he did.

He did an experiment which I still apply to this day. He explained that he gave both my brother and me $5,000. My brother had no interest in the stock market so my grandfather simply invested my brother’s full account into the S&P 500. I, on the other hand, tried picking my own investments. I chose 16 different stocks. After one year I ended up losing a few percent and my brother was up 10%. After that I invested the majority of my money in the S&P 500. That early mistake saved me money later down the line.

Have Your Teens Earn Income

One of the biggest mistakes I see teenagers make is they start investing with no money. You can’t invest if you don’t have a minimum amount to get started! Too often I see teenagers starting to invest with $100 in their portfolio. This is fine if it’s a training exercise, but the profits you may make on that $100 are on the order of about $10, and even to a teenager $10 is worth very little. A basic lunch can cost more than $10. So teenagers just aren’t going to get excited about investing with that little money.

How do you get more money as a teenager, you might ask? Working. You can start a business as a teenager like I did, but for the vast majority of kids, the best way for them to make the most amount of money in the least amount of time is by having a job. By working a full summer at $15 an hour, 8 hours a day, 5 days a week, a teenager can easily save $6-7,000 before taxes over one summer and still have the weekends free.

If you work a few summers in high school, plus work a little during the school year, there’s no reason why a teenager can’t have at least $20,000 in the bank by the time they graduate high school. Not to mention if they invest that as they earn it, they can have even more. If a teenager had $5,000 before they started high school, earning $5,000 annually and had their portfolio earn a 10% annualized return, they could have $30,000 by senior year.

Of course the biggest thing that adults and teenagers struggle with is they spend too much. Now this is obviously highly dependent on your family financial situation, but since many of the readers of this blog are relatively high-earning physicians who have kids in situations where all primary expenses are provided for them, there’s no reason why the vast amount of money that a kid earns cannot saved and invested.

Where and In What Should Kids Invest?

Lastly, where to invest? I won’t spend a lot of time on this, as there are entire blog sites about it. However, something that has worked for me is investing in the S&P 500 as well as a few stocks I really believe in.

Teens and even adults generally don’t have time to “play the market”.  Even if they do have time, most often with stocks, you’re better off just investing in the S&P 500. If more than half of professional fund managers can’t beat the S&P 500, there’s an even smaller chance that you can. In addition, index funds offer very low fees as compared to traditional types of investments or using a financial advisor. I highly recommend index funds and invest in them myself.

I also recommend teens find a few stocks they really believe in that will be around for the long run. This makes investing more fun, and more “real” since you can follow along with the companies you are investing in.

And finally, timing. The price you pay for the stock is just as important as the stock you’re buying. Obviously no one can predict timing, but just make sure you don’t buy a stock simply because you like the company, but also because you think, based on fundamentals or other metrics, the price is right.

These strategies have really worked for me and allowed me to build up a significant amount of capital for a 20-year old. I hope you find a lot of value in them.

I think many teenagers and adults in America would be much better off if they started investing and learning about investing earlier in life.

Be sure to check out my book if you’re interested in learning more (I wrote 3) and feel free to email me. Thank you to Physician on FIRE for letting me guest blog.

2 thoughts on “How to Teach Teens About Investing”