If you think we’ve had it bad with inflation nearing 10% per year, you have no idea what “bad” really is when it comes to soaring prices.

Other currencies have seen hyperinflation with prices rising 10% in a matter of hours and 100% in a matter of days. You’d think these would be exceedingly rare events, but as you’ll see in the list below, it has happened in many places around the world and more often than you might imagine.

Inflation in the U.S. seems to have peaked over the summer of 2022, and we’ve seen a gradual cooling in the inflation data as the Federal Reserve has raised interest rates. A bout of “hyperinflation” appears to have been dodged.

This post was originally published by Rick Orford with SoFi. 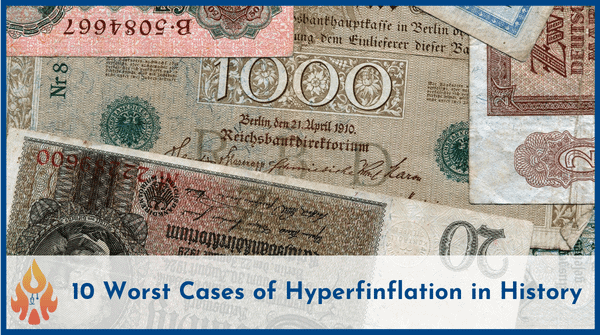 It’s hard to escape the current news of global inflation, with many people experiencing double-digit price hikes on necessities. What exactly is inflation? It’s a measure of the average price level of goods and services over time. When a country experiences inflation, its currencies’ purchasing power gets reduced. People feel the pinch, and their money doesn’t go as far.

Inflation can adversely affect an economy, including reduced output and increased unemployment. Hyperinflation, or incredibly rapid, out-of-control price increases of more than 50% per month, does the same, only worse.

The U.S. inflation rate reached 9.1% in June 2022, the highest rate since 1982. This has caused increased mortgage rates, and increased prices for goods and services. That said, if we look at other countries, we’ll see that there are far worse cases when it comes to inflation.

In this article, we’ll review 10 incidents of some of the worst hyperinflation in history and its consequences.

Inflation is typically considered high when it exceeds the rate of economic growth. For example, when prices rise faster than wages, then workers’ purchasing power declines. This can lead to a decrease in demand, i.e., reduced travel during the holidays, which can cause businesses to reduce production and result in a recession. If you’re wondering whether inflation is good or bad, you are likely to recognize the negative impact this can have.

Here are 10 examples of when inflation got really out of hand:

Greece faced a severe period of inflation during World War II. The government needed to finance the country’s war effort, the black market, and profiteering. Prices doubled every 4.3 days. The situation became so bad that some people were even forced to eat insects to survive.

The government responded by introducing price controls and rationing, but these measures failed to bring inflation under control. In the end, the Greek people suffered greatly until the situation improved in 1947.

Yugoslavia was also hit by an inflation crisis that caused the value of their currency, the Dinar, to drop. The prices doubled every 34 hours. As a result, it was difficult for citizens to purchase everyday items like food and clothing. Many resorted to smuggling goods to get by.

The government attempted to fix the problem by introducing new bills with higher denominations, but this caused more chaos and confusion. In the end, Yugoslavia abandoned its currency altogether and adopted the German mark as its official currency.

In October 1923, Germany faced a period of extreme inflation. The government had printed too much money to finance war operations, and prices were skyrocketing. More than a wheelbarrow full of bills was needed just to buy a newspaper. People were losing their life savings, and the economy was in chaos.

To halt inflation, the government introduced a new currency called the Rentenmark. This stabilized the currency, and Germany began to recover from the crisis.

Thanks to years of economic mismanagement by the government of Zimbabwe, in November 2008, inflation hit its peak. The country’s inflation rate was, month over month, 2,600%, or more than 231 million percent on a year-over-year basis. Those mind-boggling numbers meant that a loaf of bread cost what 12 new cars did a decade ago

To mitigate the issue, the government printed large amounts of money without backing it with gold or other assets. This resulted in a rapid depreciation in the value of the currency. As prices increased, people started losing faith in the currency, leading to even more hyperinflation.

The situation became so desperate that most people could not afford necessities such as food and medicine. The high inflation rate also made it difficult for businesses to operate, and many companies went out of business.

Hungary experienced a high level of inflation after the end of World War II. The country’s currency, the Forint, was not pegged to the U.S. dollar or any other currency. As a result, it was vulnerable to sharp devaluations. In addition, Hungary was still recovering from World War II, and the government was trying to stabilize the economy by printing money, a factor that can cause inflation, to finance its reconstruction efforts.

Starting in 1975, Argentina’s inflation rate increased by an average of more than 300% per year until 1991. Several factors caused the situation including the increase in the money supply without an equal increase in goods and services. This led to an increase in prices. Another reason was the decline in agricultural production, which led to higher food prices. Political instability also contributed to high levels of inflation.

Recommended: How Does Inflation Affect Retirement?

Inflation in Sudan has been an ongoing problem for several years. The main drivers of Sudans’ hyperinflation are:

•   The depreciation of the Sudanese pound

•   The high rate of population growth

•   The increase in government spending

To address these problems, the government has implemented several measures, including devaluing the currency and reducing spending. Unfortunately, though, these measures have not been fully effective, and inflation continues to be a major issue. As of 2021, the inflation rate was 359.09% compared with 2020.

Inflation in Iran is a problem that has been going on for many years. The value of the Rial has decreased significantly, and the cost of living has increased dramatically. Undoubtedly, this has caused significant hardship for the people of Iran. As of May 2022, inflation was impacting food and beverage prices at a rate of over 80%.

To combat the high levels of inflation, the Iranian government has put various price controls in place. However, these controls have been ineffective, and the inflation rate continues to rise, currently at more than 50% as of summer of 2022.

The worst inflation rate ever recorded in U.S. history reflects how harsh life during wartime can be. The highest figure was in 1776, when the rate of inflation was 29.78%. But, that was more than 100 years before the CPI (consumer price index) was introduced. Since its inception, the highest inflation rate ever recorded in the United States was 20.49% in 1917. The country went to war and had to finance that effort by printing more money.

The country’s currency, the Riyal, had been falling in value for years up to that point. People were struggling to afford anything. Many families had to choose between eating and heating their homes. Hospitals were running out of medicine, and schools closed because they couldn’t afford to pay teachers anymore.

What Is the Most Inflated Currency?​​

In the world of finance, there’s a variety of currencies that get used in different countries. While some currencies are more valuable than others, the Venezuelan bolívar earned the dubious honor recently of being the most inflated currency in the world. That’s due to Venezuela’s astounded inflation rate of 200,000%.

As you can see, inflation affects everything from a loaf of bread, to your kids’ college tuition. That said, if we look back at the worst cases of inflation, we’ll see that many attempts to “fix” the issue revolve around printing money. Unfortunately, it didn’t work out well for many countries.

Will we learn from the past? Who knows. But the current inflation rate in the U.S. seems like a mere irritation compared with other historical examples.

1 thought on “The 10 Worst Cases of Hyperinflation in History”