We talk a lot around here about the importance of staying the course.

Jack Bogle was fond of saying, don’t just do something, stand there! At least in terms of your investments.

Many of the most successful long-term investors devise a plan and stick to it, no matter the larger environment.

This means using discipline and removing emotion from investing.

Mike Piper, CPA, from the Oblivious Investor, answers a question about investing during tumultuous times like these. 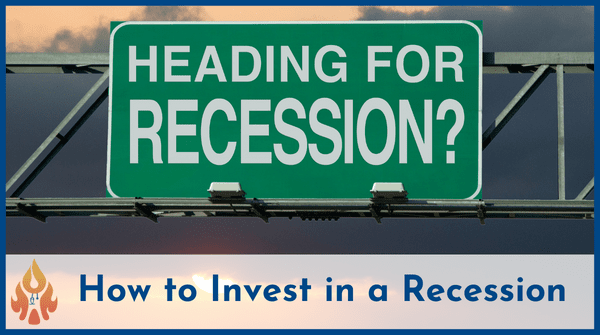 A reader writes in, asking:

“I had a question that might work well for an upcoming blog post. Deutsche Bank recently forecasted an upcoming recession, and I was curious what your suggestion would be regarding how to invest a bonus with a potentially looming recession.”

It’s important to make a distinction between the stock market and recessions. For a few reasons, a recession happening over a particular period does not necessarily mean that the stock market would perform poorly over that period.

Firstly, the stock market is concerned with how much profit businesses earn. Recessions are determined by changes in production. (Specifically, a recession is usually defined as a decline in GDP over two consecutive quarters.) Production and profitability are linked, but production changing by a certain percentage definitely doesn’t mean that profitability will change in the same direction by the same percentage.

Finally, the most important distinction, for our purposes, is that the price of a stock is essentially a prediction. It’s a function of how much the market collectively expects that company to earn. (Specifically, it’s the present value of the expected future cash flows from that company.)

So if the market has recently decided that publicly-traded corporations are, collectively, about to become less profitable (which could well be the case in a recession), that doesn’t mean that the market is probably about to go down. It means the market has probably just gone down. (And indeed, it has. As of this writing, the stock market is down about 14% year-to-date.)

In finance-speak, we say that the probability of a recession has already been “priced in” (i.e., it’s already reflected in the current price of stocks).

And that’s really darned hard. Stock prices generally already account for all of the information that you or I are likely to know.

So How Should We Invest?

Moving in and out of stocks (or in and out of certain sub-categories of stocks) usually doesn’t make sense, because of how hard this guessing game is. That’s why it usually makes sense to just pick an asset allocation and stick with it, rather than trying to adjust your allocation based on events in the news.

It’s possible that such a concept would apply with a bonus, if the bonus is a life-changing amount of money. But most of the time that’s not the case. Most of the time a bonus doesn’t constitute a major change in life circumstances and therefore does not require a change to the overall portfolio asset allocation.

Changes to the fixed-income side of a portfolio can make sense though, as economic circumstances change. That’s because current interest rates do give us some actionable information. That is, the interest rate on a given fixed-income investment is a decent predictor of its rate of return (and it’s obviously a very good predictor, if you plan to hold to maturity). So shifting between fixed-income options as the available interest rates change is not crazy.

For example, for years Allan Roth has written about using CDs rather than individual bonds or bond funds when CDs offer an interest rate that is as good (or sometimes even better), with less risk than bonds. Similarly, many people have been buying I-Bonds lately, because of how their yields compare to most other fixed-income options.

So, how should we invest if a recession is looming? About the same way we invest the rest of the time. It doesn’t usually make sense to make portfolio changes based on economic news, though changes within the fixed-income part of the portfolio can make sense, as the fixed-income option with the highest interest rate for a given level of risk can change over time.

2 thoughts on “How to Invest with a Looming Recession”