In 2014, I reached the seven-year mark after my initial Board Certification with the American Board of Anesthesiology (ABA). At the time, it was a significant milestone. I was eligible to take the all-important Maintenance of Certification in Anesthesia (MOCA) exam.

Diplomates of the ABA were encouraged and incentivized to take the $2,100 exam early in the three-year eligibility window.

In other words, if you fail, you could take it six months later, and if you fail again, you get one more shot. Waiting until the last opportunity would take away your ability to retake the exam before initial Board Certification could expire.

Like A Dutiful Diplomate, I Signed Up for the MOC Exam.

I really didn’t feel much like studying in the spring and summer for the exam, so I passed on my first opportunity, signing up for the winter window.

I didn’t feel much like studying for this test at all, but I knew that I had better put the time in. Just like I’d rather work a bit longer and retire with more money than I think I’ll need, I’d rather go into an exam with more knowledge than required.

I also felt a need to study because the vast majority of the material on the exam had little relevance to my actual job. The exam covered all topics that an anesthesiologist might encounter, such as chronic pain (which I don’t manage), open heart surgery (which I haven’t seen in years), and brain surgery (don’t see that, either).

There were esoteric facts to memorize, and memorize I did. You know the age-old question of the trains traveling towards each other at different rates of speed? We have questions like that, only they come in the form of a gas in an E cylinder that is partially full and flowing at X liters per minute. To answer correctly, you need to commit to memory the volumes of full tanks of various gases, and whether or not they are stored in liquid or gaseous form.

In practice, I start with a tank at least half full and don’t travel very far. But I relearned all the numbers (had to know them for the initial written exam eight years earlier) and I memorized a whole bunch of other minutiae that might be only peripherally related to anesthesia. Facts that are taught to be tested, and serve little practical purpose for the vast majority of us practicing anesthesiologists.

For a couple months, I studied when I could. I took advantage of down time at work in the afternoons and evenings, and took myself to the library on many days off.

Uncoincidentally, the aggravation of studying for a really expensive and largely irrelevant exam led me to explore the possibility of retiring before having to take the dumb test again, a story I told in the aptly titled Inception.

I would be taking the exam in the second of six opportunities. As much as I wasn’t planning to fail, failure was a viable but expensive option since I’d have four more testing windows in which to retake the test.

About a month after the exam, I received wonderful news via mail. I passed! 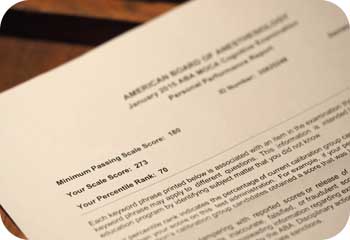 I overstudied, but as a “bread and butter” anesthesiologist who hasn’t seen a teaching institution in years (except for the time I spent $1,500 for a day in the simulation center to meet additional MOCA requirements), I thought it was best to study up rather than take my chances.

This was the last of my MOCA requirements for the initial ten-year period. According to the letter accompanying the score report, “Upon successful completion of all MOCA requirements, you will be issued a certificate that will be valid for 10 years from the date of issuance.”

Two months after receiving that letter, I received more news. A MOCA redesign that the ABA had beta tested the prior year was to be implemented for all. The exam that I just passed was replaced with MOCA 2.0.

Thousands of fellow diplomates who certified the year I did or the year before who had not yet spent the $2,100 were now excused from having to take the exam.

That’s right. Doing the responsible thing, the thing that the ABA encouraged, turned out to be a huge waste of time and money.

I’m not so naive to believe that decision was made casually or abruptly. In other words, when I took the exam in January, the Board had to have known that changes were coming, but had not been finalized, or at least not announced. They gladly took my money and time, anyway. One last money grab before the next one.

The next money grab? Yes, I was told I would also be enrolled in the new computerized MOCA 2.0 program, and expected to pay $210 a year for it. There would be no “grandfathering in.” I would essentially receive no credit for the exam I took and of course, there was no getting back all the time I put into studying for and taking the exam.

I called the ABA and expressed my extreme displeasure. Others did, too. Eventually, the ABA actually backpedaled a bit and decided I wouldn’t be charged for MOCA 2.0 for ten years since we had just paid the equivalent of ten years worth of the program to take the exam. I would still be required to enroll in the program, and answer quiz questions on a quarterly basis.

That $2,100 test, by the way, was a 200 question multiple choice exam that took me 100 minutes to complete. That’s $1,260 per hour for those keeping score at home. I traveled five hours roundtrip to a computerized testing station to take it, too, as there were no computers offering the test any closer to my home.

I strongly considered ignoring MOCA 2.0, and, as I’m planning to leave my job and possibly my anesthesia career in the summer of 2019, anyway. However, I feared I might be listed as “not participating in MOC” by the ABA and I don’t know the ramifications of such a designation with regards to credentialing and insurance reimbursements to my hospital.

Rather than risk a kerfluffle that could cause problems for my colleagues (if I were suddenly unable to work as a result), I registered for MOCA 2.0 late in 2018 and did my four quarters worth of questions over 4 days in the 4th quarter.It seemed pointless, but relatively painless.

The Problem With Maintenance of Certification

Before MOC was born, we physicians were already required to do Continuing Medical Education, subject to peer review, and many of us maintain many other time-limited certifications, such as ACLS, BLS, and PALS.

On the pages of KevinMD, you’ll find recent takes from anesthesiologist Karen Sibert, MD, who wrote The Real Dangers of Maintenance of Certification and What to Do About It. And from family doctor Linda Girgis, MD, If You are Not Opposed to MOC, the Time Is Now.

Pediatrician Meg Edison, MD has stood up to MOC, sharing her story in this post on KevinMD, and a number of other sordid tales at Rebel.MD.

It’s not that we’re not interested in keeping up our knowledge and skills, it’s just that MOC has not been shown to be an effective way to maintain skills or improve patient care. However, it has been shown to be a costly burden in terms of both time and money.

Speaking of money, a handful of physicians and journalists have been following the MOC money trail, and have uncovered some jarring facts and figures.

Kurt Eichenwald wrote the following eye-opening series in 2015 that I would strongly encourage you to read, whether you are a physician or one of our patients.

Another gentleman who has championed exposing and undoing the MOC debacle is Dr. Westby Fisher, an electrophysiologist and cardiologist who writes frequently on the topic at Dr. Wes. A good place to start getting caught up are his annual recaps, along with the comments underneath.

It’s not that we’re not interested in keeping up our knowledge and skills, it’s just that MOC has not been shown to be an effective way to maintain skills or improve patient care.

Do I feel slighted? Yes, but I am far from alone. Dozens of doctors have been sharing their MOC stories, and tens of thousands of others feel slighted, too. The number of physicians currently being subjected to unproven costly MOC requirement likely measures in the hundreds of thousands.

I can’t reclaim the time I’ve spent on MOC, but I am encouraged by the pushback, the resolutions from state and national societies, and the bravery of the physicians who are challenging the status quo.

Are you finding the burdens of maintaining certification to be onerous? Have you been subjected to double jeopardy or shifting requirements like my anesthesia colleagues and me? Let us know below!