We’ve all made money mistakes. I have, you have, and so has this writer whose focus is personal finance.

Let’s see. I built too much house, went into forbearance on student loans in residency, had a Roth IRA with high-cost, front-end-load mutual funds, tried to catch a falling knife with cruiseline stocks… I could go on. But this post isn’t about me.

It’s about Jonathan Ford Hughes, and the mistakes he’s made over the years. It’s wonderful that some people are willing to bare their blunders for all to see. Understading the errors of others helps prevent you from making them yourself.

This post originally appeared on PhysicianSense, a lifestyle blog for healthcare professionals, brought to you by MDLinx. PhysicianSense provides doctors with insights into healthcare, business, careers, personal finance, and life outside of medical practice. 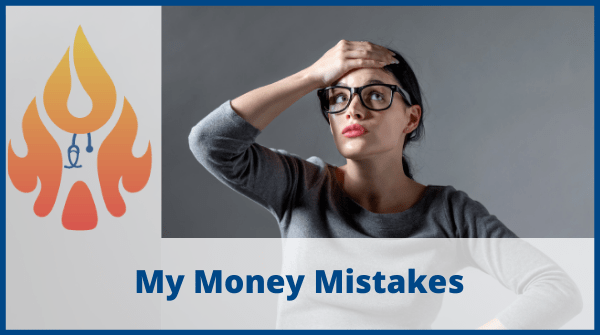 As a financial journalist, it feels weird to write about myself. But hopefully, this can help you avoid the financial mistakes I’ve made. I gravitate toward personal finance writing — particularly for doctors — to correct my own financial ignorance. The stakes, unfortunately, are higher for doctors, who spend more time in school and accumulate more debt early in their careers than they are for laypersons.

Our personal financial education is likely similar, though. Likely similar to you, nobody taught me this stuff. I had to seek out information from friends and experts. Luckily, you don’t need to make the same errors I did. Learn from my 5 biggest money mistakes.

I graduated college in 2009, at the height of the Great Recession. Luckily, I found a paid internship at a newspaper, which turned into a job. I lived with mom and dad for two years, saving my money and living with minimal expenditures. Then, I moved out.

I saw this as some major milestone transition into adulthood. I thought one of the most adult things I could do would be to buy all new furniture for my apartment. Citi offered me a new credit card with 0% interest for 12 months. I thought, no problem, I can pay the costs off in time. Does this sound familiar, doc?

Of course, I had no actual idea if this were possible because I didn’t have a budget. I wasn’t accounting for the exorbitant rent on the brand new apartment I was splitting with a friend, the cost of weekend trips to New York City, groceries, utilities, etc. That credit card debt quickly became an albatross.

Eventually, I moved into a smaller, more affordable apartment. I used the snowball method to pay off my credit card debt. And I subsisted on American cheese sandwiches and leftover newsroom pizza. This is not hyperbole. I was basically living in poverty, with every dollar accounted for, despite having a good job and sound income for my field. I was perpetually an iced coffee away from overdrawing my bank account and missing rent for about two years.

As a doctor, particularly a new doctor, you might find yourself in a similar position. You feel like you’re playing from behind because while you’ve been in school, your friends have been out in the workforce. Once you get that first paycheck, you might be tempted to spend on the things they have that you don’t.

More established physicians are not immune to this, either. As your earnings increase, your spending tends to creep up too. Soon, you may find yourself using credit cards to keep pace with your higher standard of living. This is known as lifestyle creep.

Resist. It’s an illusion. Most likely, your peers are up to their eyeballs in credit card debt. Make a budget and stick to it. And when residency ends, keep living like a resident for a while. I should have kept living like that newspaper intern for at least another year.

The same year I took on all of that credit card debt, I bought a brand new car — one that left me with zero negotiating room at the dealership. They had to truck it to New Jersey from Pittsburgh. Naturally, I selected the longest-term loan available to keep my monthly payments to about $300. Basically, I did everything wrong. The salesman must have been salivating as he drew up the paperwork with his manager.

As soon as I had the car paid off, it started to crumble. It needed a new clutch, right before my wedding, for example, and the labor alone was close to $1,000. On my honeymoon, the electric power steering died, racking up another $1,000 repair bill. Most recently, the AC compressor went. I’ve forgone air conditioning, which is invigorating during sticky New Jersey summers.

The car is paid off, so I keep driving it, even though it would be better suited for a 24-year-old, not a 34-year-old. I feel like a moron every time I get inside of it — and I don’t want you to feel like that, doctor.

Cars are money pits. If you buy new, you take an enormous depreciation hit as soon as it leaves the lot. Lease, and you’re basically subsidizing depreciation for the next driver. Buy used, and you may end up with a lemon that costs you just as much as if you had bought new.

Some time ago, we put together this car-buying guide for doctors. It contains targeted advice for doctors at each career stage. I’ll be following this guide if/when my family expands and my back is broken from putting an infant into the back seat of my coupe.

Blunder 3: Buying Too Much House Too Soon

Many physicians fall prey to this blunder. After we got married, my wife and I began house hunting. For a change, my financial timing was good. Mortgage rates were at record lows, and the housing market was still getting back on its feet from the Great Recession. We found a house that was days away from becoming a short sale. It was in a nice neighborhood with a serviceable school district.

We got a great deal on the house, and with a lot of elbow grease and a lucky turn of the market, we saw our estimated home value go up as houses around us that weren’t as nice sold for high prices.

Sounds too good to be true, right? Well, in some ways, it is and was. We use probably 25% of this house. The thinking was, we’ll grow into it. And God willing, we will. But for nearly five years now, we’ve been paying exorbitant New Jersey property taxes on the house full of rooms and bathrooms that we don’t use.

This, according to my friend W. Ben Utley at Physician Family Financial Advisors, was a classic physician and layperson money blunder. I bought too much house too soon.

Many doctors land their first job and buy a big house in a nice neighborhood. Then, they come to find out that they hate their job, don’t like living in that town or state, or that their neighbor is fond of blasting throat singing records as soon as you put your newborn down for a nap.

My wife and I are in a similar position now. I can work anywhere in the world with an internet connection, and the pandemic seems to be pushing her role to be 100% remote, too. Why are we living in a high-tax state when we could live and work anywhere?

Be like a hermit crab, Utley advises. Hermit crabs, who have the burden of carrying their houses on their backs, select a shell that fits just right. And when they outgrow it, they jettison that shell for a bigger one. The inverse is true for more senior doctors. As your children move out, why are you maintaining the overhead of all that unneeded space? Scale down and relocate to a more tax-friendly area, if possible.

Before I decided to become self-employed, I had two employers that offered generous matches for 401(k) contributions. The newspaper’s match, in particular, was unheard of in today’s economy because, for decades, they had done all they could to keep unions out of the newsroom.

Needless to say, I blew this—big time. While living at home, I should have contributed the max to capture every cent of that match. With the economy in the toilet, my retirement accounts would have been a bit more flush as the markets rebounded in the decades ahead. Instead, I left free money on the table because I thought it would be more important to have new Ikea furniture and a new car.

Most likely, your employer offers a 403 (b) plan. If they offer a match, fully fund that account and take advantage of every dollar, they give you. This is especially crucial if you’re at the beginning of your career. The markets are volatile right now, but don’t let this deter you. If the past is prologue, it will work to your advantage as the markets recover.

Like many of you, I signed on the dotted line and set up my automatic payments as soon as I finished school. I at least did something right and went to a state school with some academic scholarships, so my total debt came in at about $15,000. However, a doctor’s student debt total is likely 10x that, especially if you’re in one of the highest debt-ridden specialties.

Here’s the stupid part: I graduated in 2009, and I’m still paying off my loans. Nobody bothered to explain the student loan basics, such as interest and principal. Nobody told me about refinancing. Somehow, I blundered into consolidating my loans, but that was probably out of annoyance at paying multiple lenders. I cringe when I think about how much money I have wasted. Right now, I’m taking advantage of the suspension of student loan interest to eliminate my debt and my wife’s debt by year’s end, but I could have saved thousands!

Stop what you’re doing and go set up an appointment with a student loan advisor. Do not pay more than you have to.

What are your biggest money blunders?