RealtyMogul, a real estate investment platform for both accredited and non-accredited investors, has been around for the better part of a decade.

I’ve personally been invested with them for four years, earning a decent, high-single-digit annual return in one of their two public, non-traded REITs. These funds, which have returned closer to 15% in the last 12 months, are open to all investors.

Accredited investors (income of $200,000 as an individual, $300,000 as a couple, or a net worth of one million dollars not including your primary home) can invest in individual deals, hundreds of which have been offered on the site. These often offer higher projected returns.

What’s the track record, though? That’s what I set out to find out, digging into the data to see what kinds of deals have been offered by RealtyMogul and how they have performed. 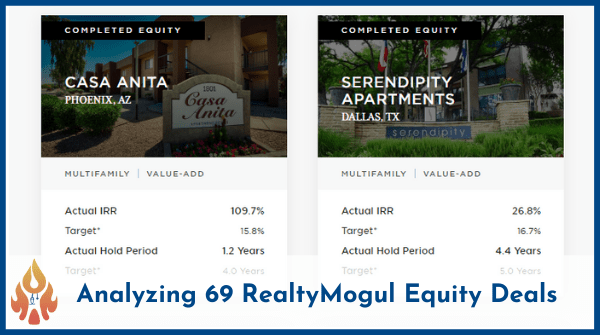 In a matter of minutes, I had all the information I would need to do this analysis. RealtyMogul is quite transparent, and the returns of all completed deals are posted to the regularly-updated Past Investments page.

As you can see in the image, this data set has a total of 173 completed deals as of April 2022, 69 of which are equity deals. There are an additional 101 fully funded deals that have not yet gone full circle.

There have been over 100 debt deals completed via the RealtyMogul platform, and the vast majority of them gave investors returns in the 8% to 11% range.

Equity deals offer a much broader range of returns, but most equity investments are expected to perform better than their typical debt deals.

The 69 completed deals came from investments in at least 17 states. 11 deals contained investments in multiple states and therefore, no individual state is listed.

Among the most popular states for equity investments, with at least four per state, are Texas, California, North Carolina, Florida, and Indiana.

Real estate investments are often categorized into one of four categories. In order of lowest to highest risk (and potential return), these are Core, Core plus, Value-Add, and Opportunistic.

10 of these deals were unclassified. Of those that were categorized, 59 were Value-Add and 10 were Core Plus.

As for the real estate sector, a majority, 42, were multifamily apartments. There were also 7 retail deals, 7 office deals, and 3 each in the mobile home and industrial sectors. There were two single family residential funds and one deal each in the commercial and hospitality sectors.

There were 5 deals with no projected returns available. Of the 64 completed deals that had published projections, target returns ranged from an annual internal rate of return (IRR) of 11.7% to 25.7%. The mean was 16.5% and the median was simlar, at 16.4%

Using the Rule of 72, we can surmise that the average investment would be expected to double your money (i.e. an equity multiple of 2.0) in four to five years if held that long.

They can promise the moon and the stars above, but if they can’t deliver, it’s just numbers on a pro forma, and you can’t buy groceries with empty promises. So, how have these investments actually performed?

When looking at all 69 deals, including the five without projected returns (those five averaged 8.4%), the overall mean is 17.3%. That’s a bit better than expected.

When looking at the 64 deals that were expected to return 16.5% on average, the actual returns were 18%, an overperformance of 1.5%. This tells me that either RealtyMogul tends to be moderately conservative with their projections or that conditions turned out to be more favorable than anticipated. Perhaps it’s a combination of both.

Either way, this is a win for RealtyMogul investors.

That’s not to say that you can expect to make money on every deal. Two of the 69 deals lost capital. One lost 7.4% and another deal (thanks, Hard Rock Hotel) lost 100%, a reminder that you shouldn’t invest money that you can’t afford to lose in any one deal.

Among the 67 deals that returned all investor capital and an additional return, 30 of them underperformed the projection. The average discrepancy among these was 5.4%.

The average return among these underperforming investments was an IRR of 11.5%. In my book, that’s pretty good for a “disappointing” return. The range of these losers was 2.7% to 17.0%.

One deal met the target return exactly at 12% and another 31 exceeded the projections.

18% returns represent a doubling of your money in four years. In deals like these, though, it also means your money is locked up for the length of the deal, which can exceed four years (in which case 18% returns would more than double your money).

How long will your money be tied up in a typical RealtyMogul investment?

In these 69 deals, the mean timeframe from start to finish was about 3 years and 2 months. The median was just a few weeks longer, and the range was 0.5 years to 5.9 years.

How long was the average projected hold period for these investments? The mean and median were both 5 years. These deals wrapped up substantially earlier than projected, on average.

In fact, only ten were held longer than anticipated by an average of about 7 months (range of 0.2 to 1.4 years over).

One was completed exactly as scheduled, and the other 48 exited early.

If liquidity — the ability to sell when you want — is important to you, consider RealtyMogul’s REITs or another platform that has a secondary market for their investments. Cadre is one such option.

What to Expect When Investing with RealtyMogul

Looking over all 104 debt deals, there are no money-losers and, as mentioned earlier, most returned from 8% to 11%. Thanks to a handful of exceptions, though, the range was 4.9% to 53.8%. The vast majority were one-year deals with a smattering of two-year loans.

My experience with the Apartment Growth REIT is that you can expect similar returns in the REITS, although returns have picked up over the last year.

If I had invested in equity deals instead, I likely would have had stronger returns, although the minimum investment for these is also quite a bit higher than the $5,000 I invested in the REIT. These equity investments are for accredited investors only; the REITs don’t have that requirement. For what it’s worth, I am accredited and I’ve invested in plenty of other deals on different platforms.

Understand that past performance may not be indicative of future results. That said, the past results I’ve analyzyed are promising. The average IRR for equity deals in the 17% to 18% range is solid, and these are the actual returns after any and all fees are factored in.

These are very much in line with the 18.5% IRR reported from 96 completed deals at Crowdstreet, a similar platform for accredited investors.

If you’d like to dig deeper into these numbers, you’re welcome to download the spreadsheet I used to compile and analyze the data. It is current as of April, 2022.

You can also get the latest data directly from the source. If you choose to register on the RealtyMogul website to view currently available investments, this site may receive a referral fee, and I thank you for supporting our charitable mission.