Today’s post is a guest post from The Wall Street Physician, a former Wall Street trader turned physician who blogs on investing topics pertinent to physicians and high-income professionals like us.

Regular readers of this site should be familiar with the good doctor, as his writings have been featured a number of times in The Sunday Best. His posts have also appeared on KevinMD and The White Coat Investor, and I’m honored to share a post of his here with you today.

Let WSP take you through the scenarios, and stick around for my comments at the end!

Physician on FIRE wrote an excellent post a few months ago discussing the meaning of FI during a bear market. With the current bull market, many people have reached FI well ahead of schedule. But if the market were to fall, these same people may drop below the standard 25x annual expense threshold of FI. Do these people stop being FI in this scenario? Or is it once FI, always FI?

It turns out that your FI number will be different depending on how you would handle the inevitable bear markets that happen during retirement. Let me explain.

Because a 4% withdrawal rate has a 96% success rate if you invest in a conservative 50% stocks / 50% bonds portfolio, the “4% rule” has become one of the foundations of retirement planning.

Using the 4% rule, the amount of money you need to save for retirement is 25x your annual spending in retirement.

I think a useful exercise to do prior to retirement is to envision various market scenarios, good and bad. A neat property of the Trinity University study is that its results apply whether you just retired or whether you are 10 years into retirement. You just reset the numbers and look at the chart to see your new portfolio success rate.

For each of these scenarios, a 50/50 stock/bond (U.S. Total Stock Market/U.S. Total Bond Market) allocation was used with annual rebalancing. Portfolio return data was taken from Portfolio Visualizer. 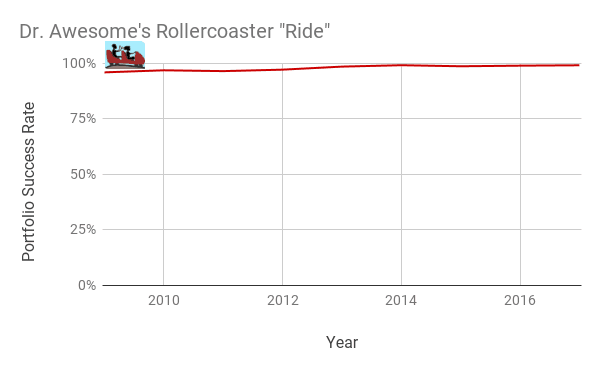 On the other hand, Dr. Badluck retired in 2000 with the same $3 million nest egg. He experienced two tough bear markets at the beginning of his retirement, and his 50/50 stock/bond portfolio in 2017 was only worth $3.16 million. 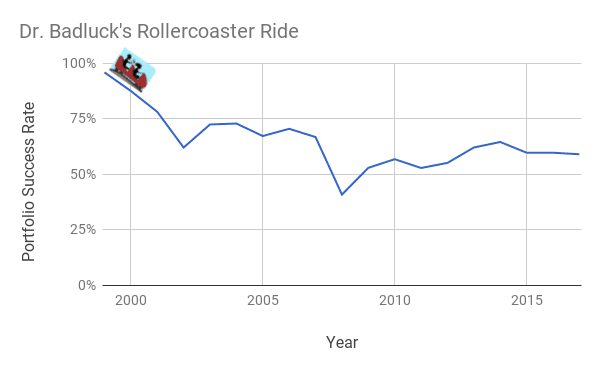 What a rollercoaster ride! I’m not sure Dr. Badluck could have stomached such volatility. Even after the great bull market we’ve had since 2009, his portfolio success rate is currently only 59%.

Is there a way for Dr. Badluck to smooth out his retirement ride? Yes!

To make his rollercoaster ride less bumpy, he should cut spending or work part-time when the market drops and his withdrawal rate rises. For example, in 2003 he was expected to withdraw $128,000 because of inflation on a $2.43 million portfolio (5.30% withdrawal rate = 62.1% portfolio success rate). If he were to instead cut spending to $100,000 a year (or alternatively made $28,000 a year so that he would only need to withdraw $100,000 a year), then he is now only withdrawing 4.1% of his portfolio and his portfolio success rate is back up to 93%.

Now let’s look at Dr. Badluck’s retirement rollercoaster with this one change: 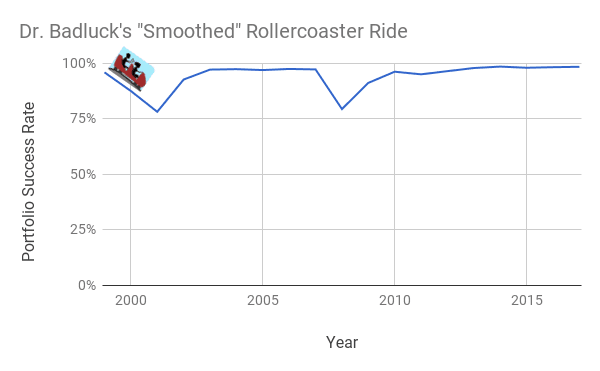 Dr. Cern, aware of the limitations of the 4% rule for early retirees, decided to instead use a withdrawal rate of 3.25% on his $3,000,000 portfolio in 2000. He did not want to cut spending or work part-time during retirement. Let’s see how his failure rate progressed during the tech crash, financial crisis, and thereafter. 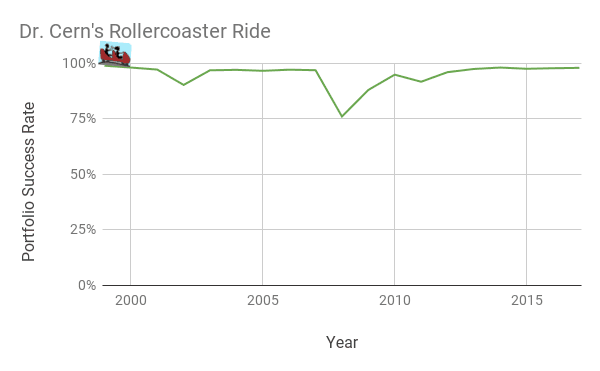 It’s a bumpy ride, but certainly more manageable than Dr. Badluck’s unsmoothed retirement scenario. So another way to make your retirement drawdowns less scary is to only retire when you have enough money to use a lower withdrawal rate.

By keeping a running portfolio success rate calculator in your mind during retirement, you’ll be able to make smarter withdrawal decisions and weather any bear market that may come your way.

You are spot on with your advice on how to turn the odds back in your favor in the event of a particularly nasty sequence of returns early in retirement. I made similar suggestions in my bear market post, but didn’t have the math or fun graphs to back up my assertions.]

I’d like to add one more tactic to increase your likelihood of success. More stocks.

While a 50 / 50 ratio will certainly “smooth the ride” as JL Collins likes to say, 75% or even 100% stocks may be the answer to higher success rate, particularly over a very lengthy retirement that many of us aspiring early retirees are planning. ]

A certain Ph.D. economist that I like to call Big ERN over at Early Retirement Now has performed an excruciatingly thorough analysis of safe withdrawal rates (in 18 parts and counting) and his results bear this out. (pun intended). His study is the Trinity Study on anabolic steroids training 16 hours a day. 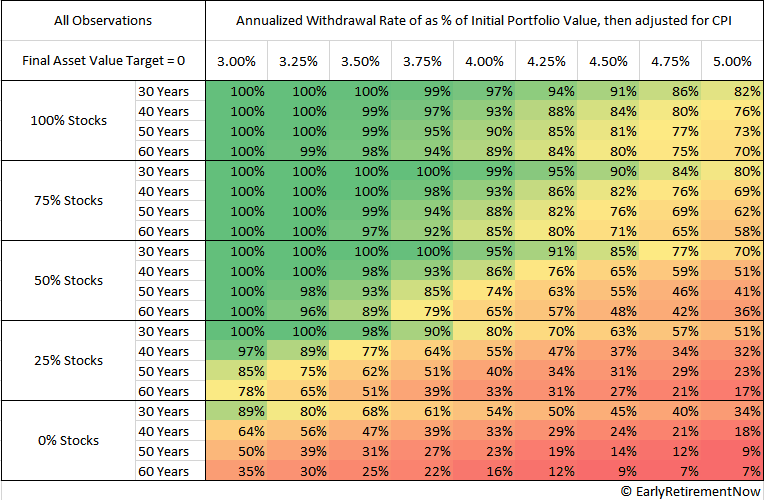 Based on his number crunching, using data dating back to 1871, the best ratio among these options for a 30-year retirement is 75 / 25. For a timeframe greater than 30 years, the higher stock allocation (100%) has performed slightly better.

So my recommendation (Big ERN’s recommendation and I’ve borrowed it), is to own a higher percentage of stocks to increase the likelihood your portfolio will survive over the long haul.

Of course, it never hurts to have a “side hustle” to cover some expenses as WSP suggested. If only I could think of some crazy endeavor that could help achieve that goal.]

Thanks again to The Wall Street Physician for his analysis, and to Big ERN for allowing me to display his Technicolor table.

What’s your plan for surviving a market meltdown?

56 thoughts on “The Rollercoaster Ride of Retirement: How to Survive Market Meltdowns”