Physician on FIRE has partnered with CardRatings for our coverage of credit card products. Physician on FIRE and CardRatings may receive a commission from card issuers. Opinions, reviews, analyses & recommendations are the author’s alone, and have not been reviewed, endorsed or approved by any of these entities.


Tony Bennett left his heart in San Francisco, while Q-Tip left his wallet in El Segundo.

My wife and I had the pleasure of visiting the lovely peninsula that is San Francisco. With so much to do, see, and eat, it would be easy to leave town with an empty wallet and a hefty credit card balance.

This frugal physician wasn’t going to let that happen.

How did we save money in San Francisco?

Saving Money in and Around San Francisco Part I

As an employed physician, I receive a generous CME allowance, which covers travel, meals, lodging, and registration for conference attendance. We planned this trip around an anesthesia meeting, which I attended for three days.

My flight and three days of meals will be reimbursed, as will the hotel. Rooms in San Francisco aren’t cheap, but the negotiated meeting rate was actually quite a bit better than anything I could find independently. This isn’t always the case with meetings, so I recommend checking Priceline.com

or your favorite online travel site before accepting the “preferred rate” offered.

My wife’s plane ticket wasn’t reimbursable, and that’s OK, because it was free. I opened a Delta Skymiles® Gold American Express Card (rates and fees)and the bonus miles covered what would have been a $400 flight. Her meals in San Francisco weren’t reimbursable either, but I’ve found that I can’t quite finish an appetizer, entrée, and desert all by myself. Yes, I feed my wife table scraps. Well, not exactly, but you get the idea.

I’m not a coffee drinker; I get my fix from a morning soda. Bottles from the vending machine in the Hilton were $4.00. Four dollars??? No, thank you. Around the corner was a Walgreens

, right across from the Walgreens, kitty corner from the CVS. The ubiquitous Walgreens had my Diet Dew on sale at 2 for $3.00, and we picked up some reasonably priced muffins and snacks there, too.

We’re not big on shopping, but we didn’t go to San Francisco just to see how little we could spend. We wanted to explore the city, and take in as much as we could in four days. I also had the primary purpose of attending lectures and panel discussions. While it was a worthwhile meeting, we did see a lot outside of the conference, and I’ve got the pictures to prove it. 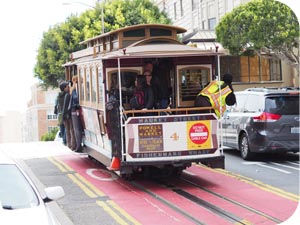 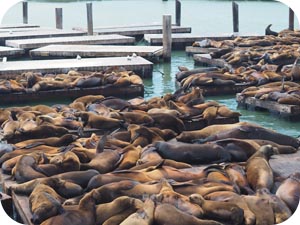 Alcatraz was high on our priority list, and we made our reservations months in advance. Nothing says romantic get-away like visiting a maximum security prison in the dark. We took the evening tour, which I highly recommend, but we took the last boat out, which really didn’t give us enough time to see all the island has to offer.

The Rock and its National Park Service tour guides were excellent, but we could have used at least another hour to explore the grounds before nightfall. If I were to do it again, I would take a late afternoon ferry out, and board the last return trip at night. There were cots you could sleep on if you missed the last boat, but they didn’t look too comfortable. 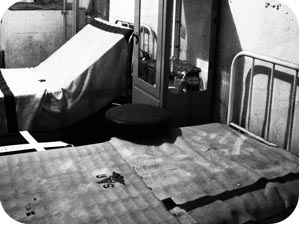 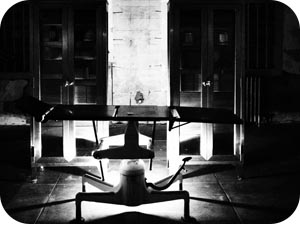 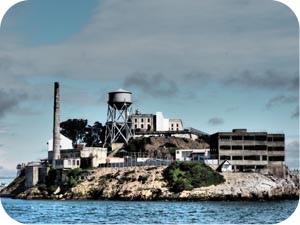 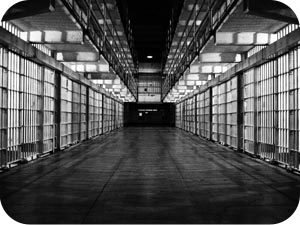 We didn’t save any money on the Alcatraz experience, but the CityPASS allowed us to choose four other experiences at a discounted rate and travel all over town on the buses, railways, and cable cars. Between the two of us, we saw the California Academy of Sciences, the De Young Museum, the Aquarium of the Bay, and took a bay tour underneath the Golden Gate bridge.

Four unique experiences with up to 7 days of unlimited public transport for under $100 was a pretty good bargain. A one-way cable car ride by itself costs $7. We took quite a few of those. 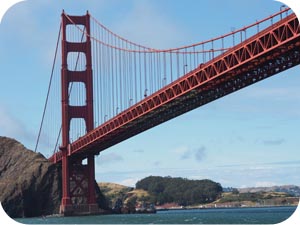 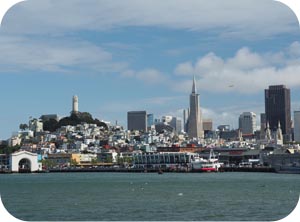 Some experiences in San Francisco don’t cost a thing. You can see amazing views from the De Young tower without entering the museum. If you arrive before 5:30 p.m. you can go to the top of Coit Tower, which I hear has fantastic views, but I wouldn’t know since we arrived at 5:43. Dang. Now I have a reason to go back!

A few blocks from our hotel is a little gem called Goop. It’s the only Frank Lloyd Wright designed building in San Francisco, which now serves as a boutique little department store. You can wander the mod interior, complete with what appears to be original built-in furniture, in a space reminiscent of a miniature Guggenheim Museum.

It won’t cost you a thing unless you buy a shirt. A shirt there could cost you hundreds. Check out Goop, then head to the nearest Gap or Goodwill. Or Ghirardelli Square. 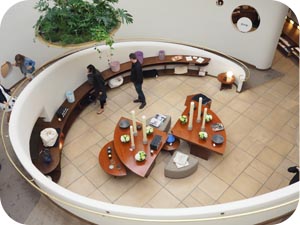 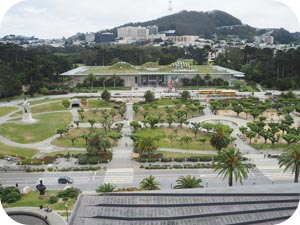 San Francisco has many more museums than the few we saw, and some of them, like the Cable Car Museum offer free admission. A number of the others have free admission days. The month’s first Tuesday seems to be the best opportunity for a gratis visit, but here’s a more complete list of free museum days around town.

You can view many famous streets and homes, including the Victorian row houses at Hayes and Steiner Streets known as the painted ladies for free. We did. 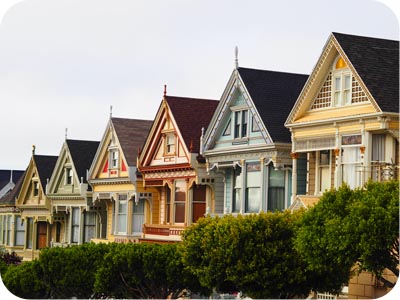 The sights and second-hand smells around Haight & Ashbury are free for the taking if you’re into that sort of thing. I’m not, but I am totally into ice cream, and we took full advantage of a BOGO half off coupon for a double scoop waffle cone at the Ben & Jerry’s on the famous corner where hippies have congregated since the 1960s. Coconuts for Caramel and The Tonight Dough were a delightful combination, much like the seemingly affable Ben & Jerry.

Goats. Lots and lots of goats.

Sam, the Financial Samurai, is a money savvy San Franciscan, and he recommended we check out the Lyon Street steps and the decamillion-dollar mansions along Billionaires Row. The views were great, the homes incredible, and on that particular day, we were blessed with the added bonus of grazing goats. 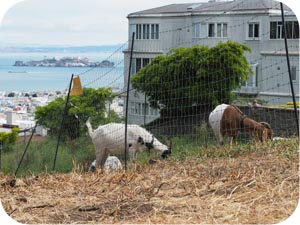 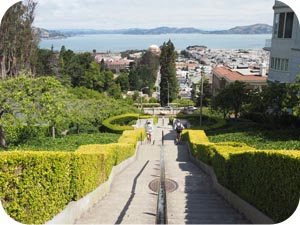 Speaking of goats, did I mention that we booked a 6-day trip for a 3-day meeting?

While we could have easily spent the entire week exploring the city, this was the first time either of us had been in northern California. We figured it would be a good idea to escape the city and see the countryside. Goodbye, Hilton. Hello, goat farm.

Patty’s goat farm is maybe an hour north of San Francisco, and half of a farmhouse duplex just up the hill from about 50 goats available to rent by the night via AirBNB ($40 off for you). Patty is a great hostess. She runs the goat farm, makes goat cheese onsite (a small tub of which was waiting for us in the mini fridge), and she makes a variety of goat cheeses available for purchase. I highly recommend the Manchego with dried apples and natilla.

Not only does the goat farm stay cost less than half of an average San Franciscan hotel room, but it also comes with goats. We were able to see the bonus goats being fed, being milked, and butting heads as goats like to do. A highlight was visiting the babies in the infirmary. 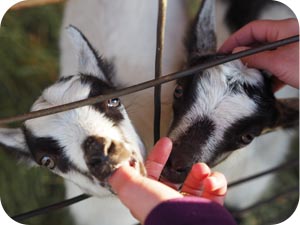 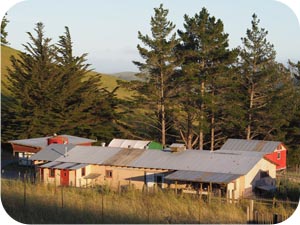 This was our second AirBNB* experience, and we booked it very last minute. We also considered a treehouse and an Airstream, but my wife really wanted to see those adorable goats. Yes, that’s her hand in the picture above. We got our money’s worth!

Our very first AirBNB experience had no goats and actually no vacancy. Last fall, our potential host doublebooked his place via a different site, and we had to find a new place to stay on Vieques Island in Puerto Rico on short notice.

We made lemonade from that lemon, staying at the swanky mid-century modern styled El Blok hotel, celebrating my fortieth birthday with steaks at the award winning restaurant onsite, and ending the evening with a kayak tour of the world’s brightest bioluminescent bay. 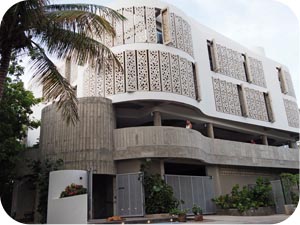 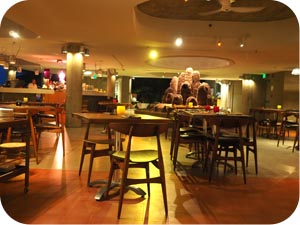 AirBNB was kind enough to say sorry for the inconvenience caused by the doublebooking with a $100 voucher, which covered most of our recent farm stay at Patty’s goat farm.

*Please note: If you sign up for AirBNB via any of the links on this page, you’ll get $40 off your first stay, and I’ll get a similar credit.