I’ll be the first to admit that I do not tithe to our church. Yes, we give, but it’s nowhere near 10% of our income. My personal feeling is that the government has taken on many of the roles and responsibilities that fell on the church in biblical times, and we do pay far more than 10% in taxes annually.

This post talks about more than just tithing, though. When you expand from simply tithing to a religious organization to charitable giving in general, I think it becomes a better conversation to have. Remove religion and most of the politics, and you’ve got fewer emotions affecting your thought process.

We’re not donating 10% of our income to charities in general, either; the actual percentage is much higher than that. Now that my only job is this blogging business, and we’re donating a substantial portion of our profits, I’ll be donating about half of my income. Figuring out how to do that in the most tax-efficient way while abiding by the IRS’ rules will be a challenge for us in 2020.

I wasn’t always this generous, though. Only after we reached financial independence did we start to give away tens of thousands of dollars per year.

Dr. James Turner is a generous man early in his financial independence journey, and he shares his thoughts on whether or not one should be giving along the way. This post was originally published at The Physician Philosopher.

Should You Tithe or Build Your Own Wealth?

To my less than ten year old, I simply said, “It’s about money.”  We then discussed how we buy things, how we earn money, the purpose of a bank, and a lot of other essential money topics including how and why we tithe and give to charity.

As a self-professing Christian, this conversation made me consider our family’s tithing, which we have yet to discuss on The Physician Philosopher.

Even if you are not religious, I think that this concept is still important.  Giving money  comes in many different forms.  It includes giving money to charitable causes outside the church.  If you are religious and feel called to tithe, maybe this post will help you revisit the topic or start the conversation if you’ve never tithed regularly.

Why Should I Tithe or Give to Charity?

First, it needs to be mentioned that money is not the only gift you can give.  You can provide your services and your time as well.

My second comment needs to be that just because you give your time and your services does not mean that you have an excuse to avoid giving money to those in need or to charitable organizations that serve them.

“To whom much is given, much will be required.“

How’s that for a controversial start to this post?

There are a bunch of important reasons to give to charity.  I am going to highlight the ones that jump out at me:

First, giving to your church or to a charity prevents money from becoming an idol. For the religious, this is done to recognize where your gifts came from in the first place. For those who aren’t, money can grasp you just the same.  Hoarding money isn’t good for anyone and letting it go – in a way that isn’t being spent on you – can be helpful to you no matter your convictions.

Second, the government encourages us to give to charity.  Though this is likely going to be less of a deduction than it used to be now that the standard deductions are huge ($12,200 single; $24,400 married filing jointly in 2019), the government will still give you a break if you give enough away.  Some people give double one year and nothing the next to to accomodate the large standard deductions.

Third, and most importantly, there are people in this world that are in more need than you and me.  Many of them ended up there because of circumstances outside of their control.  If my family or I ever end up in need, I hope that generous people will come to our aid.

Finally, those who give tend to be happier!  There is science behind this, too. Giving to others truly does make us happier.

You Can Still Accomplish Your Financial Goals

Many people are afraid to give money to charity because it will delay their ability to build wealth.  While hoarding money may get you there faster, what’s the cost?  Have you given as much thought to the fees you are paying in trading, funds, or to an advisor?

If not, physician on fire has your back when he looked at the cost of a 1% fee versus tithing 10%.  The end result?  Fees are killers.  Many of you know this, but for those that don’t; giving 10% of your paycheck to a charitable cause will hurt you less financially than a 1% fee.  This is another reason to use one of the flat, fee-only financial advisors I recommend.

In the end, you can still give to charity and accomplish your financial goals. They are not mutually exclusive. 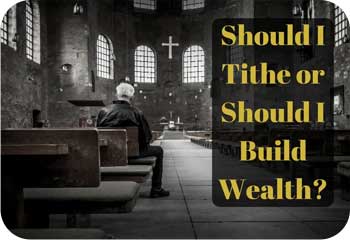 If an example would be helpful, I’ll give you my own.

My wife and I give 10% of our monthly paycheck to our church.  Admittedly, this was originally given post-tax (update: we now give pre-tax).

Related: Refinancing rates at 2% or less in the Student Loan Resource Page

That’s an improvement of over $450,000 in net worth despite giving 10% of our pre-tax income to charitable giving.

The point is that these do not need to be mutually exclusive goals. You can do both if they are a priority to you and your family.

And, let’s get real for a moment – if you want to know what you love in this life, then follow your money.  That tends to be a reflection of what we actually care about.

A Note About Behavioral Finance

The most common excuse that I hear when people don’t save money is the same excuse I am given when people talk about not giving to charitable causes.  “When I make more money – I’ll get around to that – because it’ll be easier then.”

This, of course, is hogwash.  It is one of the classic money myths. If you don’t save or give money with little, you probably will not start when you make a lot.

The truth is that if saving – or charitable giving – are not important enough for you to carve out now, they likely never will be.  Both of these endeavors take discipline.

If you have previously fallen to this line of logic, stop making excuses.  Simply tell the truth and say it’s not a priority, or start doing what your heart is telling you to do.  That goes the same for saving for retirement during residency.

Ways to Give to Charity

There are a lot of ways to give to charitable causes.

Cutting a check or submitting it electronically exists at most charitable organizations these days.  You can also perform an internet search on local organizations where you can give of your time, your money, and/or your services.

If you want to get fancy, you can also consider starting a Donor Advised Fund (DAF). PoF has written prolifically on the topic.

If you’d like to know more about the pros and cons of a DAF, I’ll point you over to  a debate between Physician on FIRE and the White Coat Investor on the topic of using a DAF (or not).

Remember, giving to charitable causes prevents money from becoming an idol, makes you happier as a human being, and you get a tax break if done properly.

If giving to charity is important to you, then your finances should reflect that value.  When you sit down to make your backwards budget or track your spending, make sure you leave room for at least having this conversation.

What do you think about this topic?  Do you tithe or give to charitable causes?  If not, why not?  If you do, why and how?  Leave a comment below.

17 thoughts on “Should You Tithe or Build Your Own Wealth?”