As Frank Sinatra famously crooned, “Regrets, I’ve had a few… but then again, too few to mention.” I, too, have had some regrets, but then again, I’ve learned from my many mistakes.

Dave from Accidental FIRE also has some regrets, and he shares them with us after updating his net worth (shared in percentages rather than absolute numbers as I do) in today’s Friday Feature.

His story and graphs below do a tremendous job of highlighting the value of time and compound interest as you see the line’s trajectory trend from almost-horizontal closer to vertical as time goes on. 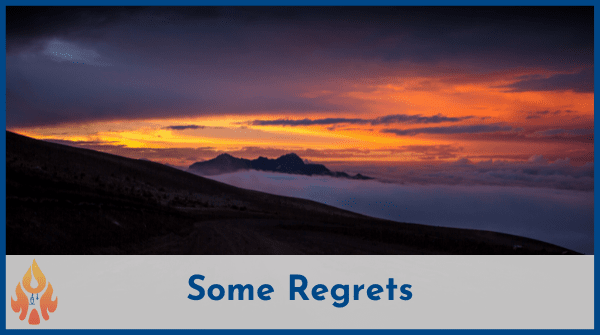 It’s been a long time since I’ve done an update of my overall net worth.  As a matter of fact, in almost 4 years of blogging, I’ve done exactly two of those and the last was pre-pandemic.  A reader recently emailed me asking that I do one after I posted recently about de-risking my portfolio.

That post was very popular and along with this new request from a reader, I’m beginning to think that maybe folks are sick of my focus on the behaviors that drive our financial decisions and want to see more nuts and bolts.

I’m just being me, but I do find it flattering that some people want an update on my progress.

For new or even semi-new readers, I reached financial independence and semi-retired in my mid 40’s using a very basic and simple index fund strategy.  I had no inheritance, no real estate deals, and I only dabbled in buying individual stocks for a while in the 1990s and early 2000s with mixed results and some lessons about sunken costs.

I found researching and buying stocks too time-consuming, which costs money by the way, and frankly not much fun.  So for the past 18 years or so, I’ve literally spent maybe an hour per year on my investments.  That’s time in my pocket, meaning I’m maximizing my returns.

Most of that time is spent doing my monthly spreadsheet update to get my net worth, which takes about 3 – 5 minutes.  I still have my original excel file that I started in 1997; she’s now 24 years old and on her own in the world.

She’s also a very flexible tool that allows me to make nifty charts with a few clicks, so let’s get to it.

This chart shows my net worth from 1997 till present

Regular readers know I don’t disclose my net worth for various reasons.  New readers might be disappointed – sorry.  The point here is to show the peaks and dips, and percentages are percentages, the raw numbers don’t matter as much.

Here’s a nifty animated gif showing the same chart with a few key periods of time and events along the way.

As mentioned, percentages are universal so I’ll provide some here for those who like to play the comparison games.

Here’s how much my net worth has gained since:

Many or possibly even most of you have better numbers than these.  I am not about maxing out returns wherever possible because that takes time, and time is money.

So spending hours on end to eke out a minor percentage gain in something or jumping through endless hoops and forms for a $175 tax credit are to me unproductive and often money-losers.  I value my time at a minimum of $60 an hour and more like $80 – $100 if I’m being realistic.

To me, spending an hour per year on this stuff is plenty enough, I have a body to take care of and nature is a playground that’s open 24×7.

I’m Making Much Less, But You Can’t Tell

One thing to note about my story is that I didn’t just go part-time at my W2 job in 2017, I went half-time, down to 20 hours per week.  So my salary was cut in half overnight.  That’s no small thing.

I also had to pay a lot more for my health plan so in reality my salary was cut by more than 50%.  As mentioned above, my net worth has increased 64% since that time.

Let’s look at it on the graph again.

It’s clear the curve is the steepest during my part-time years – even with a global pandemic thrown in!  Obviously, that’s due mostly to the raging bull market that’s on a multi-year bender with no end in sight.  I’m still maxing out my TSP (like a 401(k) for government workers), but besides that, I’m not saving that much.

Yes, my graphic design business has grown tremendously and now provides me a few thousand per month in extra income, but overall I still make way less than what I did when I was stuck in full time management misery with a nice big fat salary.

What this really shows is the amazing power of compound interest.  Once you’ve accumulated some wealth, things start taking off.  These days, even a modest monthly increase in the stock market usually makes my overall net worth jump as much as or more than my yearly salary.

It’s amazing to see and frankly, I worry that I’m starting to take it for granted.

If I Could Do It Over

I find it funny when people say they have no regrets in life.  I have regrets – I regret not putting all my money in Apple and Amazon stock!  Haha, hindsight is 2020 as we all know, and such is life.

But more seriously, even though I’ve won the game and accumulated way more than enough to never have to work again, I do regret not being more aggressive when I was younger.  I started investing when I was 25, but I’ve never been 100% in equities.  If I could go back, I’d definitely be 100% equities in my 20’s and 30’s.

I really didn’t know what I was doing; all I knew was that compounding interest worked and mutual funds were cheap and easy.  Turns out that’s plenty enough to win the game.  But had I been more aggressive and not been so worried about losing all my money, I’d have reached financial independence much earlier than I did.

Either way, it doesn’t matter because I have enough.  After my recent de-risking post, someone commented that I’m actually taking more risk by moving money to bonds because I won’t make as much.  He obviously missed the part where I said I have enough, and that I don’t care about lagging the market.

Enough is a great place to be.  As the blue line on my charts keeps going up, it’s nice to know that the new gains are all icing on the cake, and I can be adventurous and generous with that icing.

Regrets — I’ve had a few. How about you?